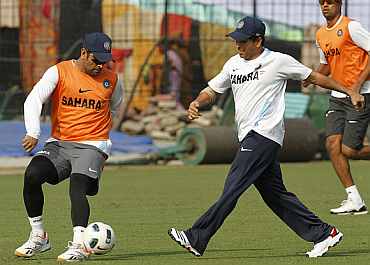 India will aim to wrap up the series by taking an unassailable 2-0 lead against the West Indies when the two sides clash in the second Test at the historic Eden Gardens in Kolkata on Monday.

At a time when Sachin Tendulkar's impending 100th international century has become a national obsession, India will try to keep the focus on the overall result which would not just boost their ICC rankings but also up the confidence ahead of the tougher tour of Australia next month.

Needless to say, the spotlight is on Tendulkar every time the veteran Indian batsman, who is in the last lap of his career, comes out to bat.

And Eden Gardens, with its glorious past, will wait for the moment with bated breath. But in the bigger picture, the match will give Team India an opportunity to exorcise the ghosts of their humiliating 0-4 defeat in England.

India had received a rude jolt in the opening Test in Delhi, falling short by 95 runs against the West Indies in the first innings, before their reputation at home took a beating, They bounced back with a collective effort to shoot out the West Indies by five wickets for a 1-0 lead in the series. From the West Indies point of view, it could have been a fine victory but the visitors failed to translate their first innings lead into anything worthwhile.

The return of Virender Sehwag has added the zing to the Indian opening as he and Gautam Gambhir gave strong and aggressive starts, that allowed the middle order batters to chase down a difficult looking 276 in the opening Test.

The 'Big Three' in the middle order -- Rahul Dravid, Tendulkar and VVS Laxman - in fact got half-centuries. Tendulkar, who missed out on his 100th century yet again, looked in sublime form with no signs of a nagging toe injury as he scored 76 to fuel India's chase.

Tendulkar is stuck on 99 centuries since he scored the last one -- his 48th ODI hundred of 111 -- against South Africa in the World Cup eight months and 14 innings ago.

Since then, he has not scored an international hundred for four ODIs and 10 innings from five Tests.Tendulkar's last Test hundred was in the first innings of the third and final Test against South Africa in Cape Town in January when he scored 146 in India's 364 all out. That was his 51st Test ton.

Meanwhile, having already notched up four centuries in this calendar year, Dravid will once again be a key player to provide stability to the Indian middle-order.

Ojha has been impressive 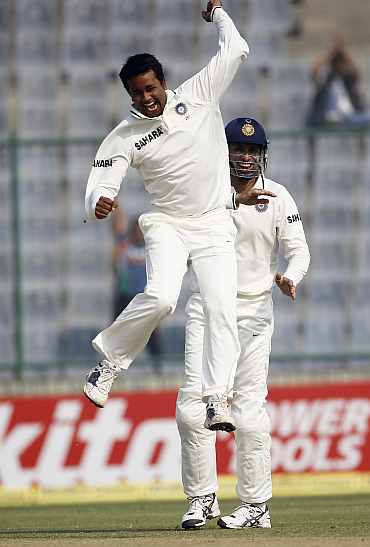 A new-look Indian bowling department, on the other hand, took up the challenge as the spin duo of Pragyan Ojha and debutant R Ashwin helped India to go for a victory.

If left-arm spinner Ojha sparkled with his personal best figures of 6/72 in the West Indies first innings, off-spinner Ashwin did the maximum damage with a nine-wicket match haul in his debut Test to be adjudged man-of-the-match.

The duo's rising to the challenge means that a healthy competition is brewing in the spin department that has for the time being shut the door on out-of-form India leading spinner Harbhajan Singh.

Ojha was at his tidy best maintaining a tight line with flight and a lot of persistence that earned him his first five-wicket haul in the first innings.

Ashwin complemented him nicely extracting bounce from the Kotla wicket with good variation leading to the West Indies downfall in their second essay. 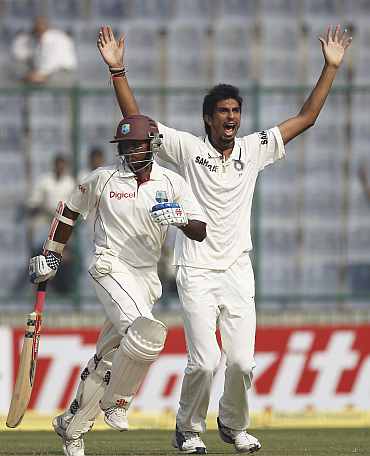 Ishant Sharma and debutant Umesh Sharma led the pace attack well even though the pitch did not offer much support.

The Indian line-up looks settled at the moment and it's unlikely that there would be any experimentation with the winning combination in Delhi.

Coming to India on back of their series win in Bangladesh, their first away win in eight years, West Indies would look to bounce back, even though it would be tough for coach Ottis Gibson to regroup the side against the top-ranked opponents. 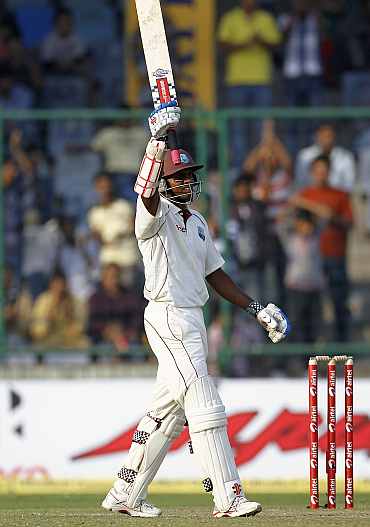 A perennial thorn in India's flesh, West Indies middle order batsman Shivnarine Chanderpaul who notched his 24th century and seventh against India in the first innings and followed it up with a dogged 47 in the second innings will once again be their batting mainstay.

The visitors would hope that their batsmen put up a good show especially the hit duo of Kirk Edwards and Darren Bravo who notched 121 and 195 in their Test win over Bangladesh return to form.

Marlon Samuels has been a big disappointment and the team think-tank would hope for a better show from him this time around.

Fit-again young batsman Adrian Barath, who shot to fame with his century against Austalia in his maiden Test appearance, may get a look-in in the line-up.

Edwards, Sammy will be key 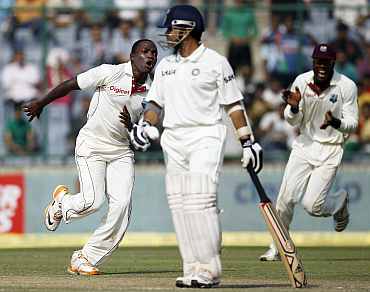 Their pace bowling led by Fidel Edwards and captain Darren Sammy will look to get reverse swing on the slow Indian track and hope that they do not let the Indian openers off the hook.

Devendra Bishoo, who produced a maiden five-wicket haul in Bangladesh, managed three wickets against India in the opening Test.