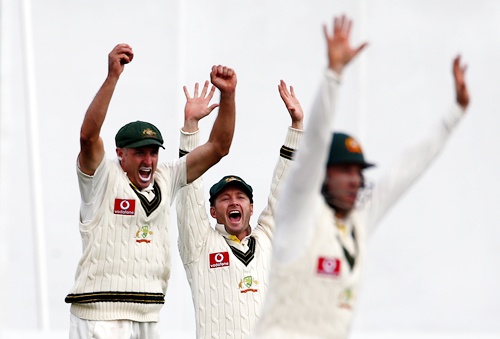 Seamers Peter Siddle and Mitchell Starc shared six late wickets to give Australia a dramatic 137-run victory over Sri Lanka in the last hour of the fifth and final day of the first Test on Tuesday.

Siddle, who finished the match with figures of 9-104, and left-armer Starc, who took 5-63 in the second innings, caught fire in the final session to bowl the tourists out for 255 and give Australia a 1-0 lead in the three-Test series.

Having been stymied in similar circumstances by a brilliant rearguard action from South Africa in Adelaide last month, Australia were desperate not to repeat the experience in Hobart.

It looked like it might be a case of deja vu at tea, however, when some resilient batting from the Sri Lankans and a couple of rain breaks frustrated the hosts for two sessions.

Siddle had already taken the key wickets of captain Mahela Jayawardene (19) and ICC Cricketer of the Year Kumar Sangakkara (63) around lunch but the tourists reached tea on 186 with six wickets still in hand. 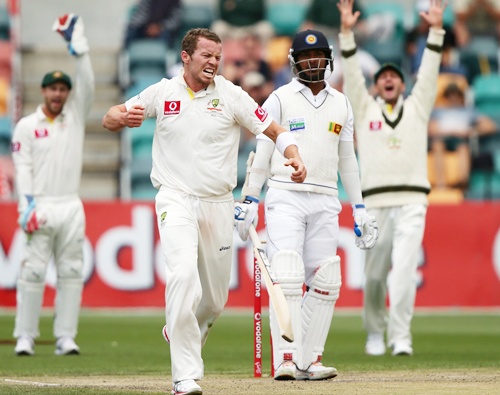 In a sign of Australia's growing desperation, wicketkeeper Matthew Wade shed his pads and gloves to bowl the final over before the break and claimed a maiden in his first spell in senior cricket.

Sri Lanka, set a victory target of 393, could still conceivably have won the match but a paltry return of 42 runs in the second session clearly indicated they were batting for a draw rather than a first win in Australia.

The Australian bowling unit, a man down after local quick Ben Hilfenhaus suffered a side strain, never gave up, even if Siddle looked like the only man who might break through for much of the day.

The 28-year-old struck again on the first ball of his second over after tea to dismiss obdurate all-rounder Angelo Mathews, caught behind by Wade for 19.

With the rain staying away, Siddle then removed the last of the Sri Lankan top order with a sizzling delivery which trapped Thilan Samaraweera lbw, one run short of the batsman's half century.

Samaraweera almost reluctantly appealed to the television umpire but it was a wasted appeal and removed another weapon from the tourist's armoury as they sought to bat out the day.

With Sri Lanka reduced to 218-6, Siddle took a rest but left-arm quick Starc picked up the baton and had soon removed Prasanna Jayawardene for 21.

Starc took over from Siddle 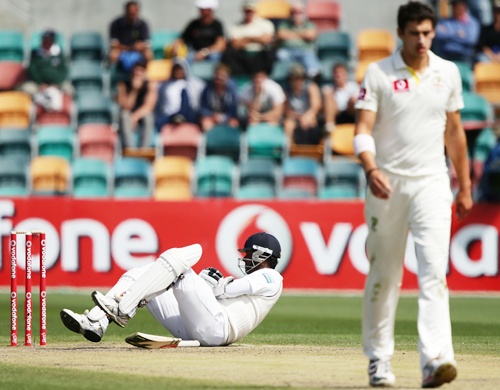 Image: Angelo Mathews of Sri Lanka lies down after being hit by a ball from Mitchell Starc
Photographs: Matt King/Getty Images

A fullish inswinger nearly took the wickekeeper's hand off and the ball flew off his glove to Mike Hussey at second slip to leave just three tailend wickets standing with around 90 minutes of play remaining.

Another peach of a delivery from Starc sent Nuwan Kulasekara back to the pavilion for nine and a perfectly delivered yorker soon afterwards removed Rangana Herath for eight.

With Siddle now bowling from the other end, it was a straight fight between the two for who would take the five wicket haul and win the match for Australia.

Starc took the honours when he had Shaminda Eranga caught behind for six, sparking huge celebrations among his team mates and the disappointingly small crowd of some 2,000.

Siddle was named Man of the Match but was also at the centre of a ball tampering row after a picture of the bowler apparently picking at the seam in Sri Lanka's first innings circulated on social media.