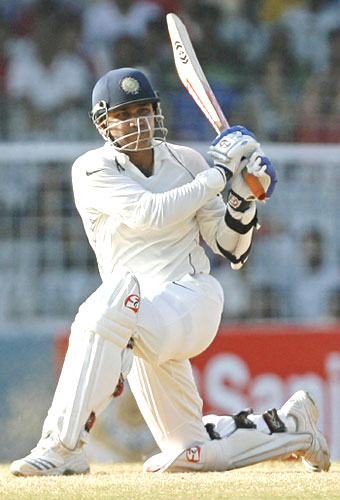 Trailing 0-2 in the four-match Test series against England, India on Tuesday received a much-needed boost with dashing opener Virender Sehwag all set to join the embattled team for the last two matches.

Sehwag will fly to England early on Wednesday morning to join the team, BCCI secretary N Srinivasan said in a statement on Tuesday.

The 32-year-old opener, who missed the series in the West Indies and the first two Tests in England because of a shoulder surgery that had ruled him out for at least two months, is expected to bolster India's batting.

India crashed to a humiliating 319-run defeat with a day to spare in the second Test at Trent Bridge yesterday to give England a 2-0 lead in the series.

They also lost the first Test at Lord's by 196 runs.

Now India will have to win at least one of the remaining two Tests to prevent England from snatching away their number one Test status.

Sehwag, who has scored 7,694 runs in 87 Tests at an average of 53.43 with 22 three-figure knocks including two triple centuries, will be playing the all-important two-day warm-up game against Northamptonshire from August 5, which precedes the remaining back-to-back Test matches at Edgbaston and The Oval. 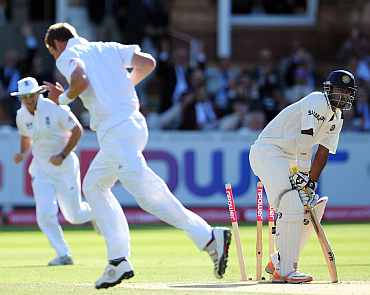 Image: Abhinav Mukund reacts after he is clean bowled by Stuart Broad

In the absence of Sehwag and at times Gautam Gambhir, India tried three different opening combinations.

The pair of Murali Vijay and Abhinav Mukund opened the innings in the three-match Test series in the West Indies that India won 1-0. Vijay, however, failed to make a mark in the Caribbean, scoring just 72 runs in three Tests.

However, Mukund, who had made his debut in that series, impressed with 147 runs.

As a result, he opened with Gambhir in the first Test against England at Lord's, but after the Delhi opener was declared unfit to play in the second Test, Mukund faced the new ball in Rahul Dravid's company.

But so far nothing has clicked with the England's bowlers completely dominating the Indian batsmen.

Apart from Dravid and VVS Laxman, most of the Indian batsmen have struggled to find their ground.

'We haven't been able to see the second new ball through' 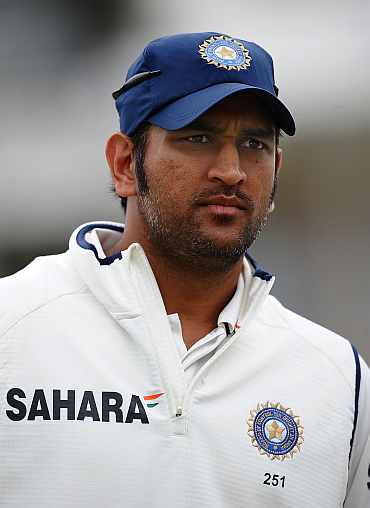 But now, with Sehwag ready to join the squad and Gambhir and bowling spearhead Zaheer Khan also likely to be fit for the third Test at Edgbaston on August 10, Indian skipper Mahendra Singh Dhoni expressed hope of a comeback.

The series so far has been hard on India and Dhoni admitted that his famed batting line up needs to fire to give the visitors any hope of a turnaround in the series.

"It is important to score and put runs on the board. We have been slightly lacking in this respect. Even in the West Indies, we didn't score runs consistently. We do need improvement in the batting," Dhoni said.