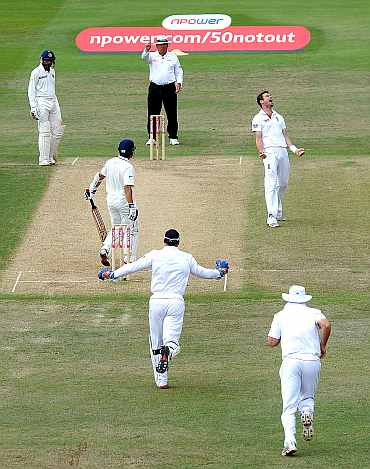 India played like Bangaldesh in the just-concluded Trent Bridge Test, said former England captain Goeffrey Boycott, who feels the visitors reign at the top of the Test rankings are numbered.

Predicting another England victory in the third Test at Edgbaston starting August 10, Boycott said it will be more than impossible for the Indians to stop the home team from here on.

"I don't see how India can recover and beat England. It doesn't matter who they bring in. The Indian batsmen don't like the short ball and the Indian seamers do not have the pace and intensity of England's bowlers so come to Edgbaston all you England supporters and see Strauss's team win again," Boycott wrote in his coloumn in the Daily Telegraph.

"There were times at Trent Bridge when India looked like Bangladesh in disguise.

"The difference between these two teams is England want it more. They are determined to be number one in the world and nothing is going to stop them," he added. 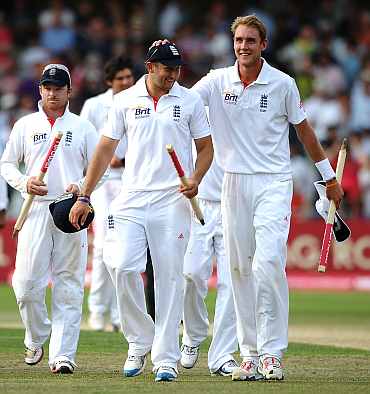 Image: England players walk back to the pavillion after they beat India

Boycott said India's approach towards the series so far has been far from impressive and the visitors massive 319 runs loss to England in the second Test is a testimony to the fact.

"With India, you get the impression they have turned up and are going through the motions. That is not good enough against this England team.

"England on the other hand have stayed focused," the 70-year-old former cricketer said.

Boycott was of the view that in the second Test, India were no match to England in any department of the game.

"Their ground fielding was atrocious, their bowling was wayward and lacking thought. The field placings were non existent and their batting apart from (Rahul) Dravid in the first innings and (Sachin) Tendulkar in the second was hopeless," he said.

'It was a fantastic cricket match' 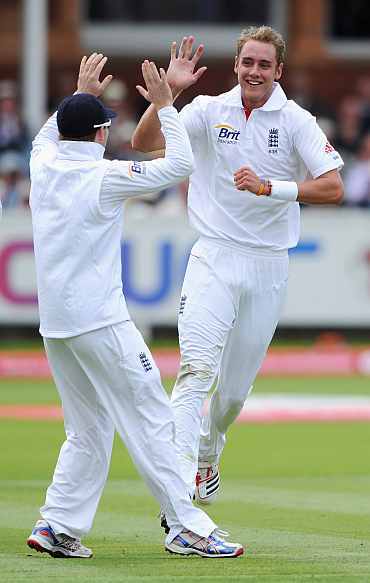 Boycott was full of praise for the Trent Bridge track, which according to him produced great exhibition of Test match cricket.

"Overall it was a fantastic cricket match. It was a great advert for the game and a superb victory by England," he said.

"Cricket should be played on more pitches like this. They give the bowlers an opportunity to get into the game rather than flat surfaces where batsmen plunder mountains of runs," he added.

He also lauded the brilliant performances of English cricketers in the second Test.

"There were some great individual performances. But don't forget for two days it was nip and tuck who was going to win the game. With India having a lead of 67 on the third morning, if Kevin Pietersen and Ian Bell had got out cheaply, Dhoni's team may well have won," Boycott said.

"Stuart Broad was magnificent and his hat-trick a fantastic moment. Tim Bresnan rose to the occasion with a fine batting display and terrific bowling. Well done England. Two nil and plain sailing," he concluded.