The Expert replies: What's common between Bell and Azhar? 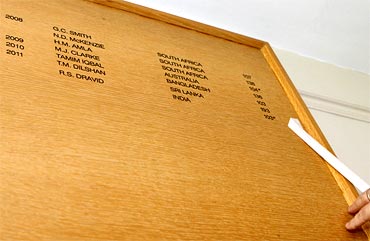 Image: The Lord's Honours Board

Each week, Rajneesh Gupta will pick ten cricket-related questions readers send him and provide answers. Your queries should be addressed to: askrajneesh@rediffmail.com; Ask Rajneesh on Facebook

Can you please shed some light on Lord's Honours Boards? Also, is it possible to give a list of Indian players who have their names on it, both batting and bowling.

The Honours Boards in the Home and Away Dressing Rooms at Lord's details every century, five-wicket hauls in an innings and ten-wicket hauls in a match that occurred at Lord's, with the exception of the two centuries scored in a neutral Test in 1912.

Ian Botham holds the honour of appearing on the collective Honours Boards most often - no fewer than ten times: nine as a bowler and once as a batsman, scoring 100 runs or more.

India's Vinoo Mankad was the first man to appear on both Lord's Honours Boards in the same Test. He scored 184 and took 5-196 in their 1952 Test. Ian Botham repeated the feat against Pakistan in 1978. 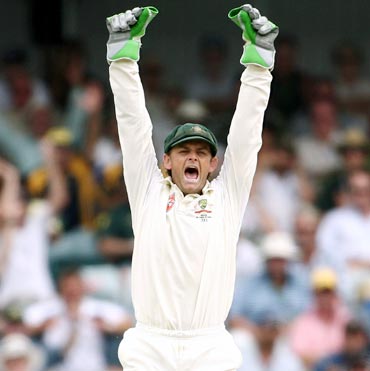 Allan Border played 153 Tests without a break between March 1979 and March 1994, which is the maximum consecutive Tests played by a player.

Mark Waugh and Sunil Gavaskar hold the second and third positions, with 107 and 103 Tests respectively. However, each one of these three did miss one or more matches at some point of time during their career.

Australia's Adam Gilchrist holds the record of playing most consecutive matches from start to end of a Test career -- 96 between November 1999 and January 2008.

Scorers for a match range from 4 to 8 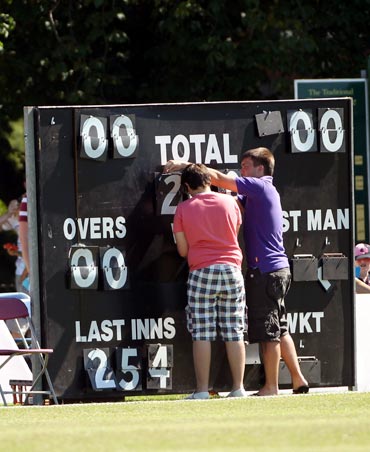 I would like to know about the scoring system in an international match. How many scorers are needed for a cricket match? Who appoints them? How do they work? And what happens to the score sheet after a match is over?

Scorers are an integral part of cricket, but they hardly get any recognition. For an international match, the number of scorers may range anywhere between 4 and 8. The prime objective here is the smooth functioning of the match. It is the responsibility of host association to arrange the scorers.

There are scorers in the media box (generally 2-3) who provide minute details to journalists covering the match. These details are used in reports/stories you generally see next day in newspapers.

Scorers are also needed to handle the manual/digital scoreboards on the ground. In case of manual scoreboards, normally one competent scorer does the scoring and has a team of enthusiastic youths to assist him in displaying the vital statistics by changing the metal plates bearing players names, runs, wickets, overs' information etc.

And, then, there are official scorers (generally 1-2), who acknowledge and respond to various signals made by the on-field umpires.

Each and every ball bowled in the match is then recorded. There are two methods of scoring: box method and linear method. In box method, all the information is filled in just one sheet of paper, whereas linear method involves at least two types of score sheet - a ball-by-ball record of play, and innings scorecard.

Some scorers use another sheet for recording bowling spells as well. During the match these scorers communicate with each other on walkie-talkie/phones.

Now-a-days, computerised scoring has also found its takers. However, there are many who still prefer manual scoring for various reasons.

Broadcasters (TV/Radio) have their own set of scorers, which cater to their specific needs.

In case of any dispute, the official scorers' figures are deemed final. However, the match referee can always ask them to amend their figures if he is sure that they have made some error.

When India conceded 400 runs in a day 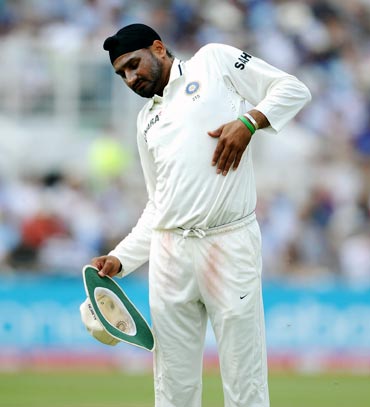 India conceded 417 runs on the third day of the Nottingham Test, while picking five wickets. This is the second highest number of runs conceded by India in a single day's play. The most they have conceded are 471 for the loss of 8 wickets, also to England on the opening day of The Oval Test in 1936.

Apart from these two instances, there is one more instance of India conceding 400 runs in a single day's play. That was against Australia at Adelaide in 2003-04 when Australia ended the opening day at 400 for five.

The record of the maximum runs scored in a single day's play in Test cricket is 588. It was made on the second day of Manchester Test in 1936 between India and England and involved both the teams.

England resumed their first innings from 173 for two and added 398 runs before declaring the innings at 571 for 8. India ended the day with a score of 190 for no loss.

The record of maximum runs scored in a single day's play by one team is Sri Lanka's 509-9 against Bangladesh on the second day of the Colombo PSS Test.

Who spins the coin? Who makes the call? 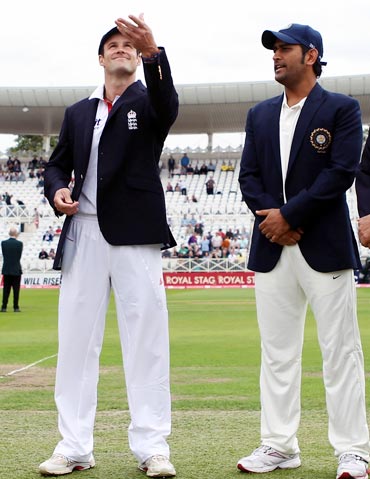 What criterion decides who will toss the coin between two captains before a game is started?

Law 12.4 deals with the toss in cricket. However, it is silent about spinning of the coin. It is the home captain who usually spins the coin and visiting captain makes a call. This is one of the many traditions that are being followed in the game of cricket.

When the match is played at a neutral ground, the side that comes first in alphabetical order is considered the home team. So, if India is playing Sri Lanka in South Africa, then India will be the home team and the Indian captain will spin the coin. Again, there is no rule governing this practice, but this has been followed without any trouble for last so many years and there is no particular reason to abandon it.

The best batting averages against India 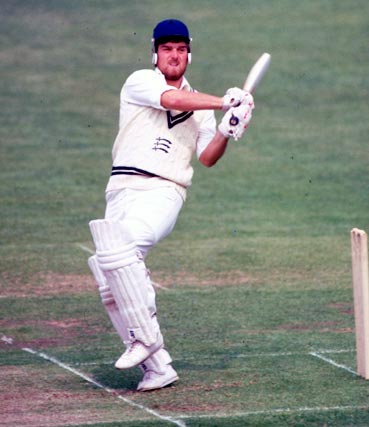 I would like to know the names of all cricketers having a batting average of over 50 in Tests and over 40 in ODIs against India only.

Putting a ceiling of 10 innings in both forms of the game to eliminate any undeserving candidate gives us 13 names who have a 50-plus average in Tests and 40-plus average in ODIs against India.

However, most of the above players fulfilled the conditions against other opponents too. Inzamam and Kallis, in fact, average 50-plus in Tests and 40-plus in ODIs against five opponents each (excluding all instances where they played less than 10 innings against a particular opponent).

The only player who fits completely into your criteria is England's Mike Gatting. In 27 innings of 16 Tests against India, Gatting aggregated 1,155 runs, at an average of 55.00, with three centuries and three fifties. His highest average against any other opponent was 37.75 against Australia.

In 18 ODIs he played against India, Gatting aggregated 525 runs, at an average of 40.38, with one century (only century of his career). His highest average against any other opponent was 35.86 against Pakistan.

No standard measurement of a cricket ground? 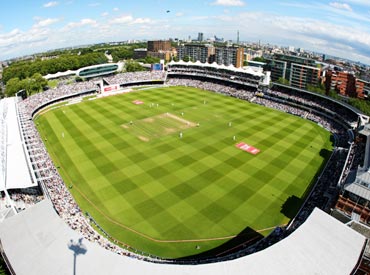 Image: An aerial view of the Lord's cricket ground in London

Why is there no standard measurement of a cricket ground, like in other sports? Each ground has different boundary measurement, which helps in scoring fours and sixes to create records.

You are right, Viwanath. Cricket is perhaps the only major sport which does not define a fixed shape of the ground. The ground can vary from being almost a perfect circle, to being an over-stretched oval.

However, this does not mean that there are no requirements to be met. ICC's Standard Playing conditions clearly define the maximum and minimum size of the playing area. The clause 19.1 of ICC Test/ODI/T20I match playing conditions state that:

'The playing area shall be a minimum of 150 yards (137.16 metres) from boundary to boundary square of the pitch, with the shorter of the two square boundaries being a minimum 65 yards (59.43 metres).

'The straight boundary at both ends of the pitch shall be a minimum of 70 yards (64.00 metres). Distances shall be measured from the centre of the pitch to be used.

'In all cases the aim shall be to provide the largest playing area, subject to no boundary exceeding 90 yards (82.29 meters) from the centre of the pitch to be used.'

However, these clauses are applicable only to the new grounds. The clause 19.1 further states that:

'Any ground which has been approved to host international cricket prior to 1st October 2007 or which is currently under construction as of this date which is unable to conform to these new minimum dimensions shall be exempt. In such cases the regulations in force immediately prior to the adoption of these regulations shall apply.'

In addition, the conditions require a minimum 3 yards (2.74 meters) gap between the "rope" and the surrounding fencing or advertising boards. This is to allow the players to dive without hurting themselves.

As you will see, that it is the exempted grounds that are cause for concern. However, most grounds which regularly host international games easily meet the minimum dimensions.

Most wickets in a spell without conceding a run 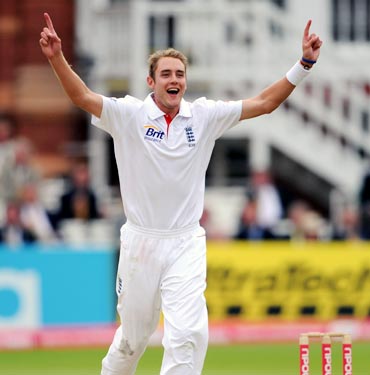 It is very difficult to be absolutely certain about such records. This is because it involves closer scrutiny of score sheet of all the Tests. Unfortunately, some of them don't exist anymore, so we only guess about some performances.

It seems that West Indies pacer Jermaine Lawson holds the record of taking most wickets without conceding a run. At Dhaka, in 2001-02, Lawson returned the figures of 6 for 3 in 6.5 overs. All six wickets came in a spell of 18 balls in which no run came off Lawson's bowling.

Broad's is the eighth known instance of a bowler taking five wickets without conceding a run.

What is common between Bell and Azhar? 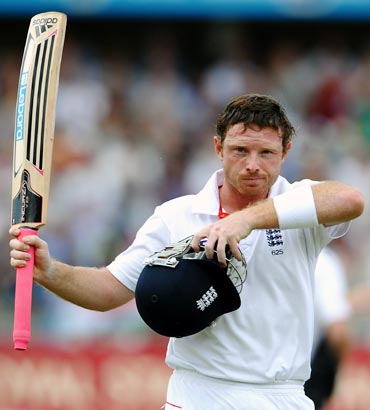 Ian Bell is, in fact, one of the three players who have got 199 as their career-best score. The other two are India's Mohammad Azharuddin and Australia's Matthew Elliott.

New Zealand's Martin Crowe remains the only batsman to miss a triple century by a solitary run.