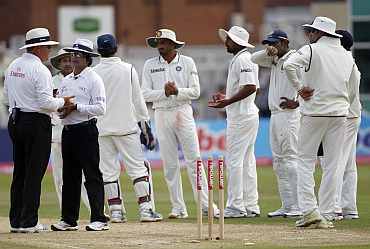 Ian Bell's controversial "non dismissal" during the second Test between England and India subverted the laws of the game and had nothing to do with the Spirit of Cricket, former England captain Michael Atherton said on Monday.

Bell was run out in farcical circumstances off the last ball before tea on the third day of the second Test at Trent Bridge, when the England batsman walked off assuming partner Eoin Morgan's previous shot had gone for a boundary when in fact Praveen Kumar had fielded the ball just inside the rope.

With the ball still alive Abhinav Mukund removed the bails and India's muted appeal was upheld and Bell given out for 137, prompting boos from the fans and a show of dissent by the departing England batsman.

India captain Mahendra Singh Dhoni then chose to withdraw the appeal when asked to by his England counterpart Andrew Strauss and coach Andy Flower during the interval.

India's players were greeted with a chorus of jeers as they returned to the field for the final session but when centurion Bell re-appeared, the boos were replaced by an ovation for the tourist's sportsmanship.

'Bell was guilty of doziness' 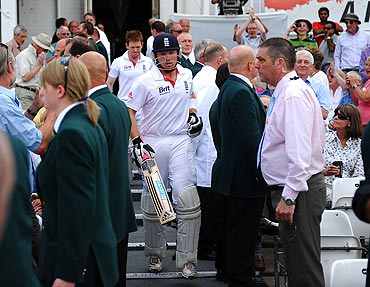 Atherton, however, believed it was the wrong outcome.

"Dhoni will be hailed as a great sportsman for his actions and there is no doubt that by withdrawing his appeal, he rescued what has so far been a hard-fought and good-spirited contest," Atherton, wrote in The Times on Monday.

"Things might have deteriorated had he not done so. Which is not to say he was right to do so. Bell was guilty of doziness and of forgetting the first rule that any young batsman is taught: you don't leave your crease while the ball is still live.

"In this instance, some spurious notion of the spirit of the game has actually subverted the laws of the game, and, therefore the natural progression of the game.

"Dhoni will be congratulated for his sportsmanship... but he would have been well within his rights not to have withdrawn the appeal regardless of the unpopularity and possible ramifications that would have inevitably followed."

'Bell took it upon himself to act as the umpire' 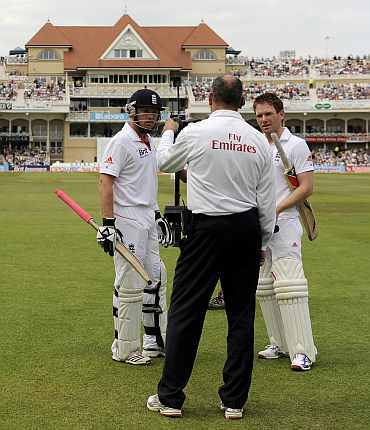 Atherton went further, suggesting that if anyone had brought the Spirit of Cricket into question, then it was Bell, who was eventually out for 159 to put England in a commanding position to take a 2-0 lead in the four-match series.

"Surely, at the heart of the Spirit of Cricket is respect for the umpires and the decisions they make," Atherton wrote.

"Through doziness or naivety, Bell took it upon himself to act as the umpire. He, not umpire (Asad) Rauf, decided the ball had gone to the boundary; he decided that the ball was dead; he decided the over had been bowled, and that tea was at hand. That is not the bastman's job.

"It was Bell, not India, who made a mistake yesterday and Dhoni should not have been castigated for initially upholding the appeal. It had nothing to do with the Spirit of Cricket.