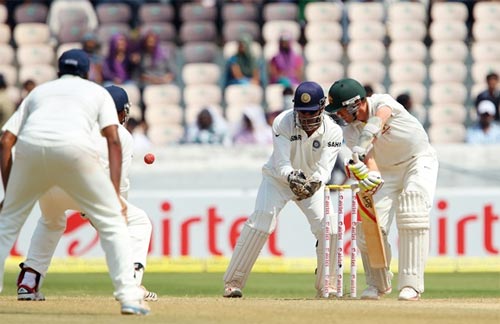 Image: Peter Siddle edging one to the slips

Australian batsmen haven't been able to survive enough overs in the last two Tests to know what it is like batting on a typical Indian track on the fifth day of a match and that prompted them to practice on the Test-match strip in Hyderabad.

Having batted only nine overs on the fifth day of the first Test and the second Test getting over in less than three and half days, the Aussies got a "virtual test" of batting on a "fifth day Indian track".

It was inevitable that playing spinners would be their focus of attention during the final practice session in Hyderabad but what was interesting was some of their top batsmen opted to bat on the Test-match wicket. 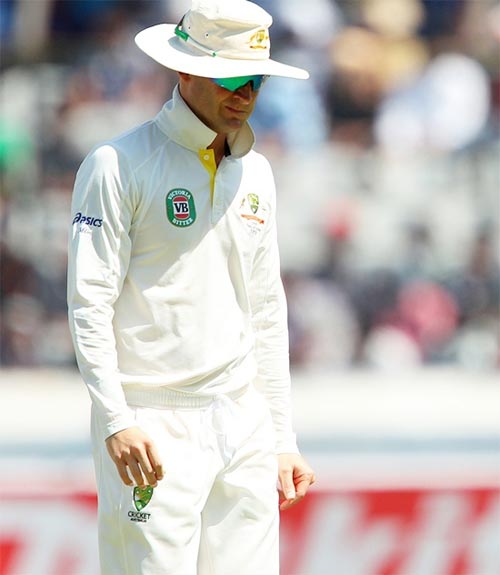 The two other batsmen who spent quality time facing the spinners on the match-strip were David Warner and Shane Watson.While watching the Aussies practice, it became evident that apart from Clarke, Watson and Warner are the two batsmen, who are at least expected to take on India's spin trio.

"Any day, we would like to practice on a Day 5 wicket. Practice a huge amount on that. As I have said earlier that Watson and Clarke are among top-eight batsmen, who have experience of playing here.

"So more the boys get a chance to practise on a fifth day track, better it will be for their careers," chief coach Mickey Arthur reasoned when asked about the specific reasons for training on fifth day pitch. 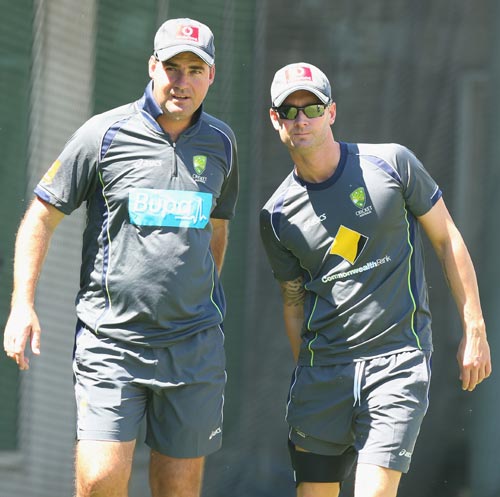 "We want our batsmen improving against spin bowling. Just like whenever India comes to Australia, we take them to WACA (Perth). Our batsmen are still young and learning to bat on Day 5 wickets. You learn that with experience," he added.

Skipper Clarke seemed to be walking the talk about taking more responsibilities. Although he got a "bruise" being hit on the knuckles by a Mitchell Johnson snorter, he carried on manfully ignoring the pain.

The captain was seen standing at the umpire's position and keenly watching likes of Warner and Watson bat. He was seen individually speaking to each and every player.

"He (Clarke) had a chat with our batsmen. He spoke about forming partnerships.

"And when Michael talks, others listen. Our goal is to ultimately ensure that when these guys come back later to play a series, they do so as better players," said Arthur. 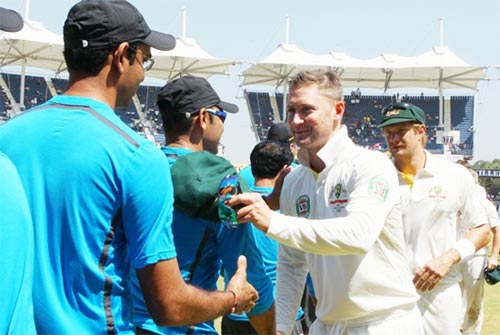 Asked about how different it is playing spin in Australia compared to that in India, the coach explained, "It's like North Pole and South Pole.

"In Australia, the start of a Test match, it's all quick, quick and quick and then it becomes slow. It's completely opposite in India, where it is slow to begin with but suddenly things start getting quicker on the fourth and fifth day.

"Therefore, we want to make them aware about the conditions and may be find a way to cope it."