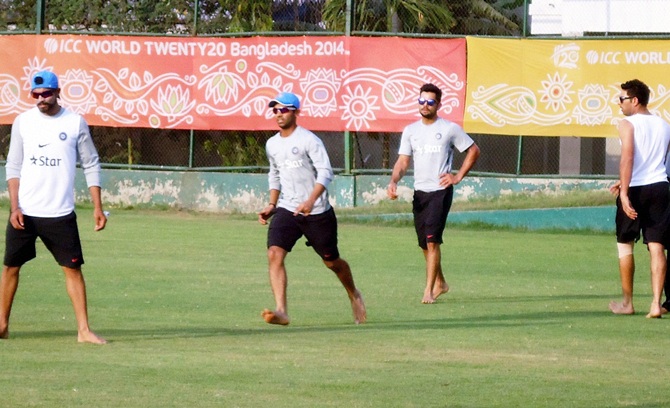 However, on Tuesday, there was something unusual as they took the field for a practice session at the BCB Cricket Academy ground in Mirpur, ahead of Friday’s World T20 semi-final against South Africa.

Mahendra Singh Dhoni and his men trained without wearing their sports shoes, by the end of the session Yuvraj Singh, the hero of India's victory over Australia on Sunday, was seen limping off, though the seriousness or extent of the injury was not known.

- Also see: LED stumps and bails in T20 cricket: 10 things you must know

From a viewer's point, the training was something different.

If you hail from West Bengal or Bangladesh, watching the megastars play barefoot certainly added a local flavour and made one take a trip down memory lane.

No wonder, the best footballer on the park was skipper Mahendra Singh Dhoni, who effortlessly did the inside-out dribble and chipped the ball while taking a free-kick.

When someone asked the reason for playing barefoot, Dhoni replied with a straight face: "Paise khatam ho gaye (We don't have any money left)!"