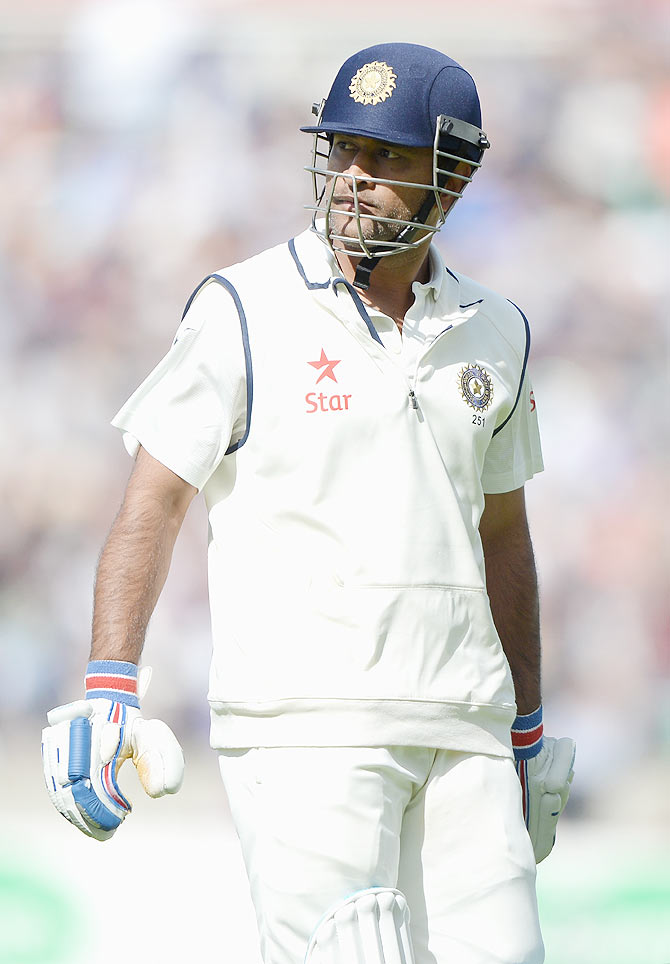 At the conclusion of the Test series against England, Harish Kotian assesses the Indian players’ showing.

India’s batting disappointed yet again as they were humiliated by an innings and 244 runs by England in the fifth and final Test at the Oval, in London, on Sunday.

The visitors, who won the second Test at Lord’s, were comprehensively outplayed in the next three and lost the series 1-3.

Things took a turn for the worse for India from the third Test, in Southampton, in which they were hammered by 266 runs. The next two matches saw four batting collapses in a row. In sum, the showing could easily rank as one of their worst performances in Test cricket in recent years.

This is India’s third successive Test series defeat to England, having suffered a 4-0 whitewash in 2011 and a 1-2 loss at home last year.

At the conclusion of the Test series, here’s a look at the Indian players’ performances.

Captain Mahendra Singh Dhoni led the way with the bat with four half-centuries in the five matches, but every time he came to the middle he was left with a lot to do.

The top and middle order failed big time and Dhoni saved his team the blushes with three fifties in the last three Tests, but was unable to prevent defeat.

Had the specialist batsmen had done well with the bat, his contributions would have made a telling difference.

Dhoni finished with 349 runs, at an average of 34, but his captaincy though came under a lot of criticism, especially when England were in control.

He went on the defensive too early at times and let England back into the contest. But there is no danger to Dhoni’s reign as far as captaincy is concerned with no other suitable candidate in line to replace him. 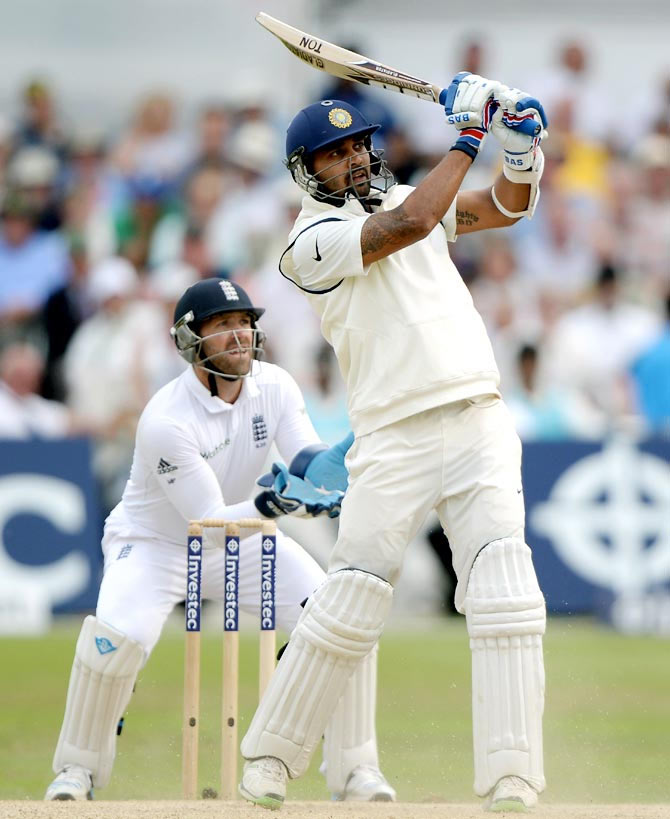 Murali Vijay was the only Indian batsmen to cross the 400-run mark, finishing with an aggregate of 402 runs in 10 innings, an average of 40.

After a superb start to the series -- a century in the first Test at Nottingham followed by two half-centuries -- his batting went on the slide in the next three games.

The discipline that the right-hander showed in the first two games, especially with leaving the deliveries outside the off-stump, was missing in the latter part of the series and he kept losing his wicket cheaply. 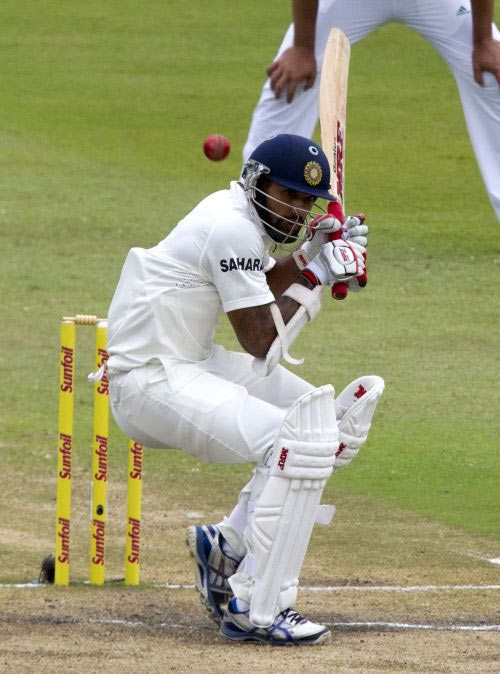 Shikhar Dhawan’s tendency of throwing his wicket away after getting off to starts cost him his place in the side after the first three Tests.

The left-hander scored just 122 runs in six innings before he made way for Delhi team mate Gautam Gambhir.

In three of his six innings, Dhawan had got off to decent starts, with scores of 29, 31 and 37, but failed to convert them, throwing his wicket away with loose shots. Veteran Gautam Gambhir fared no better than Dhawan and failed in four successive innings. A highest score of 18 in four innings, from which he aggregated 25 runs, was all he has to show.

Lack of footwork and his discomfort against the moving ball was quite evident. It remains to be seen if he retains his place in the Test squad after this poor showing. 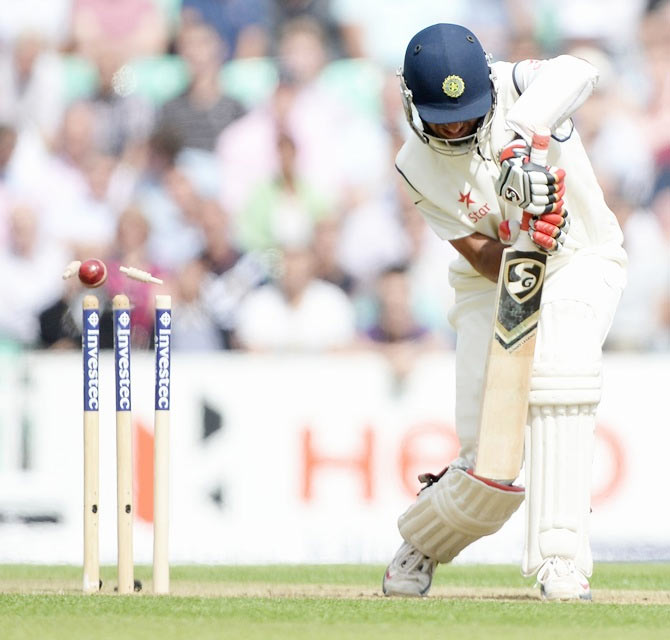 The crucial No. 3 position, where the legendary Rahul Dravid performed with great distinction for so many years, proved to be a task too demanding for the Saurashtra batsman.

What was disappointing is that he failed to learn from his mistakes and repeated them right through the series. The incoming delivery proved to be his biggest problem, and England’s bowlers made most of his weakness as they repeatedly broke through his defences.

Pujara hit a half-century in the first match but returned a disappointing tally of 222 runs in 10 innings. Wonder whether India will persist with him at No. 3. 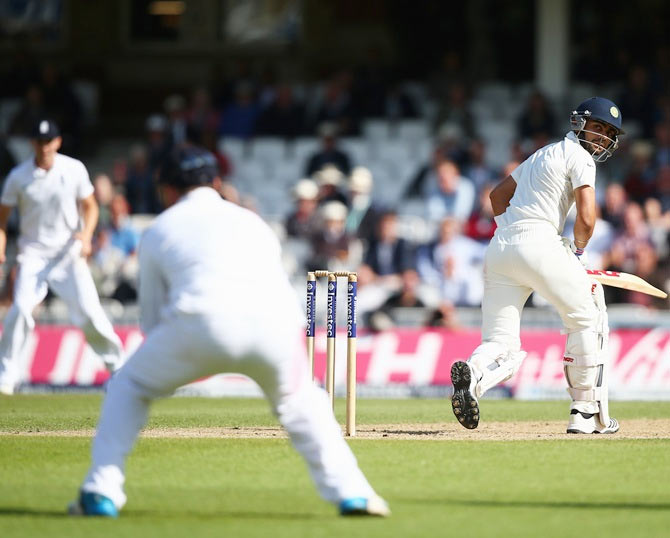 Image: Virat Kohli of India looks back as he is caught out by Alastair Cook of England
Photographs: Paul Gilham/Getty Images Harish Kotian

Kohli could not curb his temptation to flirt with deliveries outside the off-stump and, more often, than not ended up getting caught behind the wickets. In other words, he fell to the trap perfectly laid by the England seamers. He was another batsman who continued to repeat his mistakes.

This was one of the worst performances by an Indian top order batsmen. Kohli managed just 134 runs in 10 innings, with a highest of 39.

While he has shown over the last few years that he is one of the world’s top batsmen in limited-overs’ cricket, this series proved that he still has a lot to learn when it comes to batting in Tests in overseas condition. 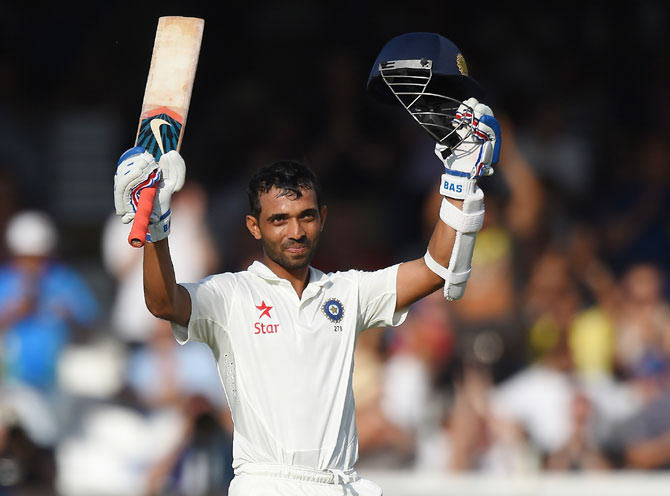 Ajinkya Rahane’s brilliant century at Lord’s set up India’s famous 95-run victory in the second Test before the visitors suffered reverses in the next three games.

Rahane scored 103 at Lord’s before hitting back to back half-centuries in the next match at Southampton, but fared poorly in the last two matches.

He also needs to work on his front-foot game, as he was caught and bowled thrice in the series, trying to play away from his body.

The Mumbai batsman finished with 299 runs, at an average of 33, and was one of the few positives of an otherwise disappointing India batting performance. 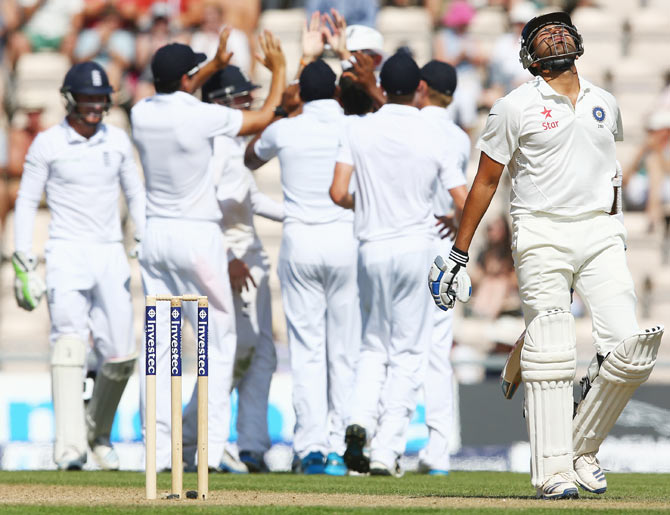 Rohit Sharma got a chance in the third Test at Southampton but was promptly dropped after failing in both the innings.

His wicket in the first innings proved costly as he threw it away after scoring 28, trying to lift off-spinner Moeen Ali over the top.

In the second innings, he poked away at a wide out-swinger from Anderson and was caught behind for six.

However, the lack of runs from the middle order might still see him retain his place in the squad for the next Test series. 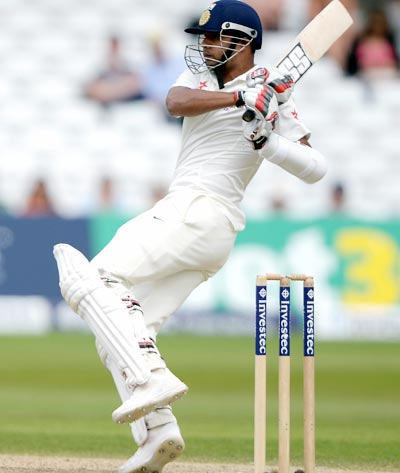 Stuart Binny played a crucial knock of 78 in the first Test at Nottingham after India were in a spot of bother in the second innings.

But there was nothing much to follow as he aggregated just 118 runs in six innings while failing to pick a wicket from 32 overs in the three matches.

Despite being one of the top all-rounders in domestic cricket for Karnataka, captain Dhoni didn’t seem to have faith in his bowling and used him sparingly in the three games that he played. 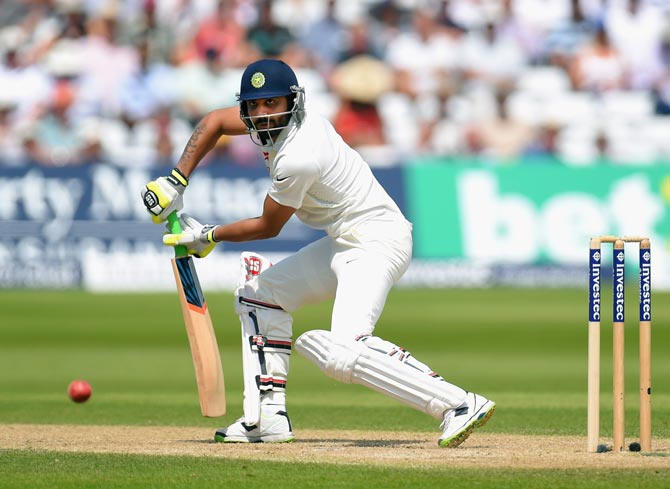 Ravindra Jadeja was integral in India’s victory at Lord’s with his counter-attacking innings of 68 from 57 balls in the second essay, while taking three wickets in the game.

But he was used as the lone frontline spinner in the first three matches, and hardly made an impression with the ball. He managed nine wickets in four games at a disappointing strike rate of 104, which meant a wicket every 17 overs.

Dhoni persisted with his favourite teammate for four games before dropping him for the fifth Test.

As India’s spin legend Erapalli Prasanna rightly observed: ‘He [Jadeja] is not a wicket-taker. Jadeja's capability as a spinner doesn't make him a strike bowler. Now if the team management forces a stock bowler to become a strike bowler, then disaster is waiting to happen.'

He also dropped the crucial catch of England captain Alastair Cook on 15, who made most of the lifeline to end his run of poor scores with a dogged 95 which gave his team a good start in the third Test. Many believe it was that drop catch which proved to be the turning point of the Test series. 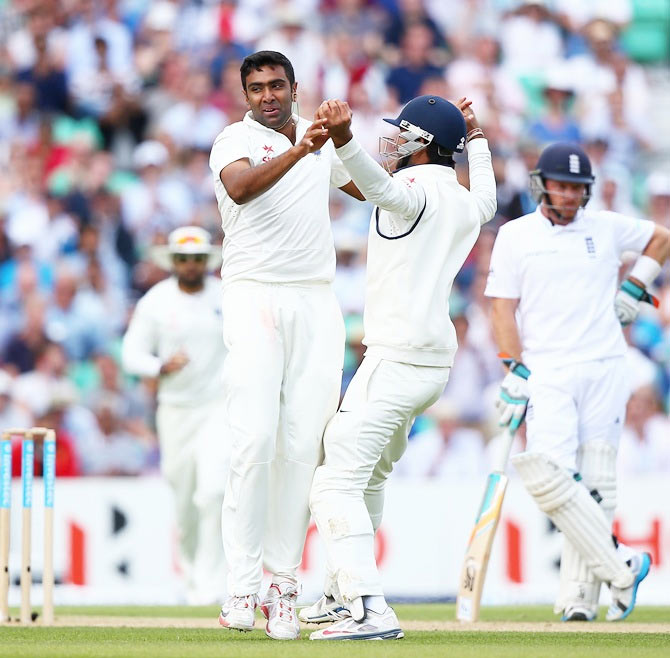 Captain Dhoni seems to have lost faith in Ravichandran Ashwin’s ability as a spinner, especially in overseas Tests, as Jadeja got the nod as the lone slow bowler for the first three Tests.

However, Ashwin forced his way into the side for the last two games after Jadeja’s mediocre showing with the ball.

Unfortunately for India, the off-spinner convinced more as a batsman than as a bowler.

He played two good knocks of 40 and 46 not out in the fourth Test but picked only three wickets in the last two Tests during which he sent down 35.3 overs. 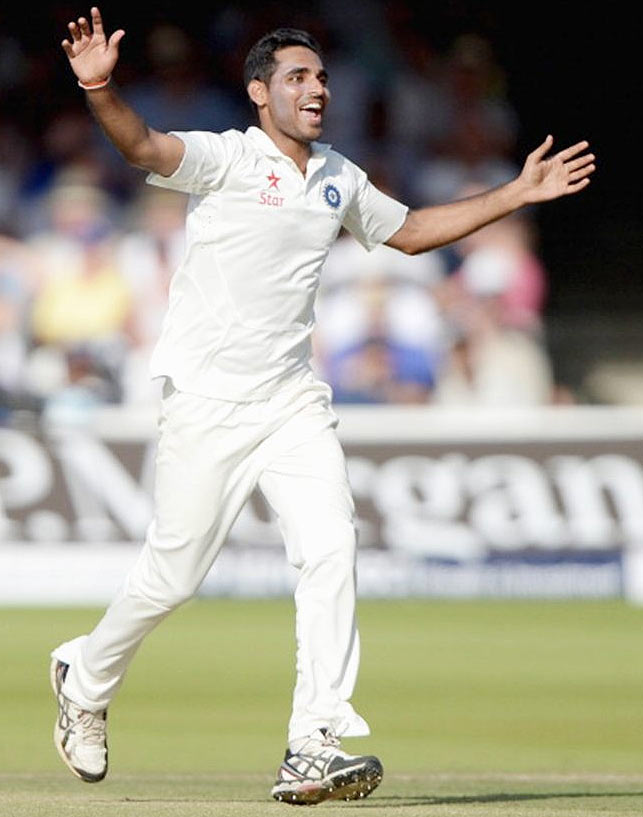 Bhuvneshwar Kumar was easily India’s best player in the five-match series with a haul of 19 wickets and 247 runs.

Just like his team, Kumar’s performance continued to dip in the last three games and the huge workload seemed to have taken a toll.

Going forward, he would do well to increase his pace a bit; it will make him that much more effective in overseas conditions. 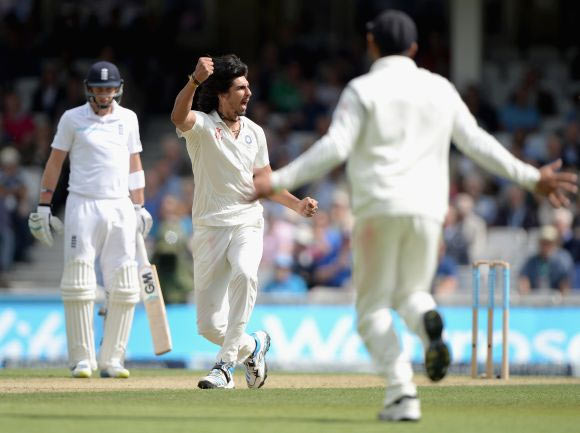 Ishant Sharma’s magical spell at Lord’s when he took 7-74 set up India’s victory in the second match before injury ruled him out of the next two games.

England were bounced and bullied by Ishant as their batsmen were left running for cover.

But his absence from the next two Tests because of injury dented India big time as the bowling attack went completely flat.

Ishant came back for the final Test at the Oval, where he took 4-96, but the batsmen’s flop show meant that India slipped to another crushing defeat. 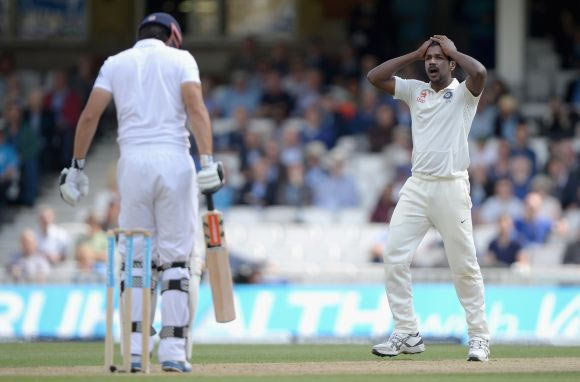 Varun Aaron took a lot of time to win his captain and Jharkhand teammate Dhoni’s backing.

After being overlooked for the first three games, he was drafted into the team for the fourth match in which his extra pace caught everyone’s attention as he claimed three wickets.

But, again, the lack of runs in the last two games left Aaron and the rest of bowlers with a lot to catch up. 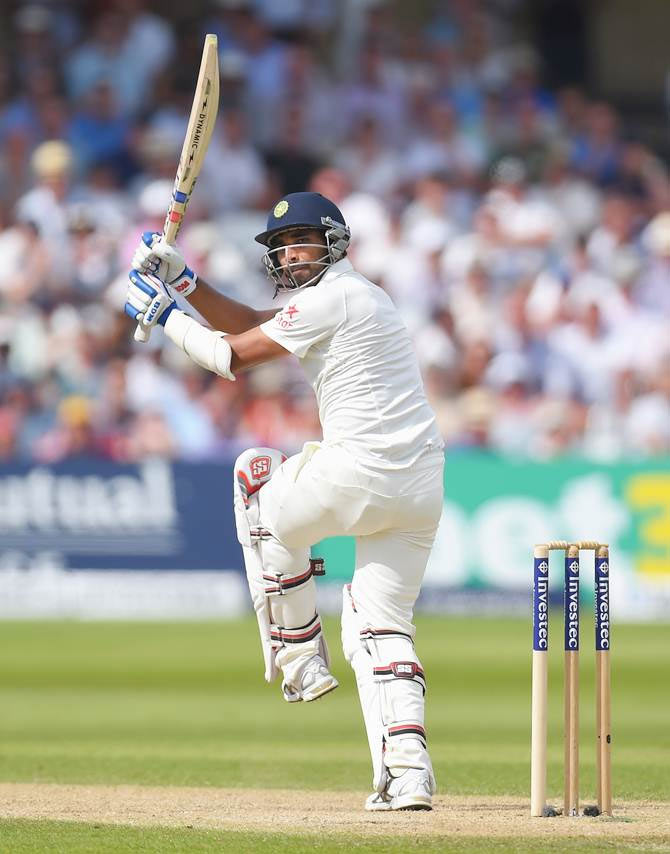 Mohammed Shami hit an unbeaten half-century in the first Test but was a big disappointment with the ball.

India’s top bowlers in recent months struggled to find his rhythm in England. He picked five wickets in the first three games, with a strike rate of 115, before being dropped from the team.

Pace and control deserted him in England and his performance with the ball was rather ordinary. Pankaj Singh had to wait long to get his international call up and his first Test wicket also took ages.

Test cricket proved a different cup of tea for the lanky Rajasthan pacer, who has been one of the most consistent bowlers in domestic cricket.

Pankaj had to bowl as many as 69 overs before he got his first wicket in Tests, in the fourth match at Manchester, after going wicketless in the previous one at Southampton.

He created a lot of opportunities and was lucky to have a catch dropped early in his spell in the third match. Alastair Cook was dropped by Jadeja at third slip off Pankaj with his score on 15 in Southampton which was one of the turning points of the series.

With a return of two wickets in 75 overs, at an unbelievable strike rate of 225, it is unlikely that the bowler will be picked in future.

Pacer Ishwar Pandey was unfortunate not to get a single game in the series, while reserve wicketkeeper Wriddhiman Saha had to pull out midway of the tour because of injury. His replacement, Naman Ojha, also didn’t get a game.