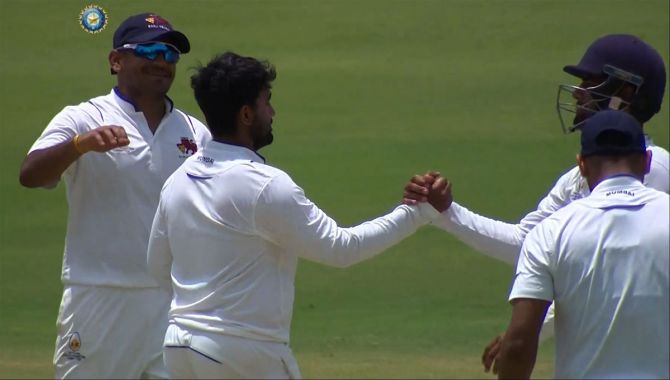 Domestic giants Mumbai on Thursday broke the world record for highest margin of victory in the history of first-class cricket as they crushed minnows Uttarakhand by a staggering 725 runs on the fourth day of their Ranji Trophy quarter-final at the KSCA Ground in Alur, on the outskirts of Bengaluru, on Thursday.

In the Ranji Trophy, the previous record for highest margin for victory was held by Bengal, who had defeated Odisha by 540 runs in 1953-54.

Mumbai's world record comes a day after Bengal broke a 129-year-old one with all their nine batters scoring half-century in a single innings against Jharkhand in another quarter-final.

Mumbai will take on Uttar Pradesh in the semi-finals.

The 41-time Ranji Trophy champions, who dominated right from the first-day, declared their second innings at 261/3 and thus set Uttarakhand an improbable 794-run target.

They had piled up 647/8 declared in their first essay, riding on maiden double hundred from debutant Suved Parkar (252).

Kulkarni wreaked havoc as he first castled opener Kamal Singh (0) and then trapped rival skipper Jay Bista (0) in front of the wickets, with the opposition tottering at 1/2. He then cleaned up Robin Bist (3) with a delivery that jagged backed in as Uttarakhand was starring at a huge defeat.

In-form Mulani, who had grabbed a fifer in the first innings, got into the act and ran through the middle-order. His victims included Kunal Chandela (21), Dikshanshu Negi (5) and Mayank Mishra (0).

Wickets kept tumbling for the hill state even as Kotian dismissed three lower-order batters in quick succession and also grabbed the final wicket of Agrim Tiwari to cap off a historic win for his side.

For Uttarakhand, such was the collapse that only wicket-keeper Shivam Khurana (25 not out) and Chandela could reach the double-figure mark.

Parkar was adjudged the player of the match.

Bengal in command against Jharkhand

Sayan Mondal and Shahbaz Ahmed snared four wickets each to put Bengal in the driver's seat against Jharkhand on day four of their Ranji Trophy quarter-final in Bengaluru on Thursday.

Courtesy of an impressive performance by the bowlers, Bengal obtained a massive 475-run first-innings lead. The overall lead after the day's play stood at a staggering 551 runs.

The Abhimanyu Easwaran-led side seemed to have put one foot in the semi-final.

Bengal, who declared their first innings at 773/7, had created a global first-class record, when all nine-batters, who took guard, scored half centuries.

Jharkhand, who started from their overnight score of 139/5, were bundled out for a meagre 298 in the first innings, as right-arm pacer Mondal (4/71) and left-arm spinner Ahmed, (4/51), who shined for the Royal Challengers Bangalore in the IPL, wreaked havoc.

For Jharkhand, Virat Singh, who remained unbeaten on 113, striking 15 boundaries and three sixes, was the lone warrior. All the other batters failed to make a mark and surrendered in front of the Bengal attack.

All-rounder Anukul Roy (4) was the first one to be dismissed on Thursday after he became Mondal's fourth victim and was caught by Sudip Gharami.

Wickets kept tumbling for Jharkhand even as Ahmed spun his web around the opposition and ran through the lower-middle order.

Shahbaz Nadeem (25), Rahul Shukla (5), Sushant Mishra (9) failed to provide necessary support to Singh and made a beeline to the pavilion.

But skipper Abhimanyu decided against enforcing the follow-on.

In the second instance, Bengal ended the fourth day at 76/3, losing both openers Abhishek Raman (22) and Abhimanyu (13) cheaply. Both were dismissed by Nadeem (3/18).

Nadeem then got his third when he castled first-innings centurion Sudip Gharami (5). Anustup Majumdar (22 not out) and experienced Manoj Tiwary (12 not out) were holding fort.

Spinner Kumar Kartikeya carried on with his brilliant bowling display and spun a web around the Punjab batters as Madhya Pradesh cruised into the Ranji Trophy semi-finals with a 10-wicket victory.

Kartikeya scalped 6/50, his second-best bowling figures in first class cricket, with another spinner Saransh Jain playing perfect second fiddle, claiming 4/100, as Punjab folded for a paltry 203 in their second innings.

Punjab resumed on day four at 120 for 5, still 58 adrift of their opponent to make them bat again.

After a failure from the top order once again, wicket-keeper batter Anmol Malhotra (34) and Siddharth Kaul (31) began the day cautiously and steadily, and it appeared the duo would help Punjab take a respectable lead.

However, Kaul's patient display with the bat ended soon after, after Saransh Jain got the crucial breakthrough - the former was stumped by MP keeper Himanshu Mantri.

The dismissal set off a quick fall of wickets and helped MP consolidate their strangehold over the match, with both Malhotra and Sanvir Singh (0) departing soon after, courtesy a brilliant bowling display by Kartikeya.

With nothing to lose, it was Mayank Markande (33), who batted with freedom, taking the MP bowlers to the cleaners with one four and three sixes.

But Markande's lone battle did not prove to be enough as Jain picked up the wickets of both tailenders Vinay Chaudhary (2) and Baltej Singh (6) to finish off the Punjab innings.

With only 26 to chase down, MP openers Himanshu Mantri (9 not out) and Yash Dubey (17) achieved the target without much fuss in just 5.1 overs, helping their side to comfortably book a place in the semis.