# By playing in his 40th game in the World Cup, Ricky Ponting has set a record for appearing in most games, overtaking Glenn McGrath's tally of 39.

# Ponting has been dismissed 'run-out' five times in the World Cup. Twice against West Indies and once each against Zimbabwe, Sri Lanka and England.

# Australia's superb 91-run win is the second biggest by runs margin at Motera, behind the 144-run triumph by Sri Lanka against Zimbabwe on October 10, 2006. 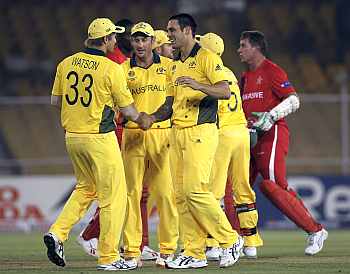 # Mitchell Johnson (4/19) has bowled brilliantly to set a record for the best bowling performance at Motera, Ahmedabad, obliterating Farveez Maharoof's 4 for 20 for Sri Lanka against India on November 6, 2005.

# Michael Clarke (58 not out off 55 balls) has played a superb innings -- his fifth fifty in the World Cup.

# For the first time in India, Clarke has recorded successive innings of fifty-plus. In his previous innings, he had made 111 not out against India at Visakhapatnam on October

# Clarke has amassed 494 runs at an average of 98.80 in the World Cup. His tally includes five fifties in 10 innings.

# Australia's total of 262 for six is the highest in the world cup at Motera, bettering the 239 for six by New Zealand against England on February 14, 1996.

# Chris Mpofu (2/58) has emulated his best performance in the World Cup. Against Ireland at Kingston on March 15, 2007, he had produced similar figures.

# Craig Ervine, on his World Cup debut, has posted a duck -- his first duck in ODIs.

# Australia have won 8 and lost one out of nine played against Zimbabwe at the World Cup.

# Graeme Cremer and Prosper Utseya have added 49 -- Zimbabwe's highest against Australia for the eighth wicket in ODIs, surpassing the 34 between Heath Streak and Taibu at Bulawayo on February 24, 2003.

# Cremer (37) has registered his career-best innings in ODIs, bettering the 31 not out against Kenya at Harare on October 13, 2009.

# Watson has got his 12th MOM award in ODIs  his first against Zimbabwe. 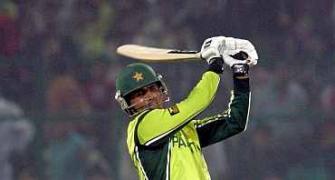 Razzaq is up there with Pathan, Watson: Akram 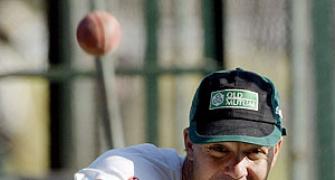 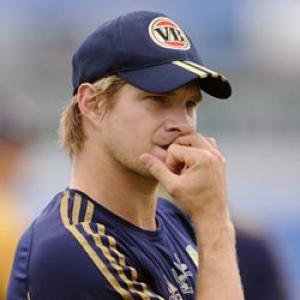