News
Business
Movies
Sports
Cricket
Get Ahead
Money Tips
Shopping
Sign in  |  Create a Rediffmail account
Rediff.com  » Cricket » Why Kohli believes India can hold on to No. 1 ranking

Why Kohli believes India can hold on to No. 1 ranking

- 'Our objective is to keep playing consistent cricket, having rankings and getting to number one and dropping it is not in our hands, but with this long season, it's in our control in my opinion.' 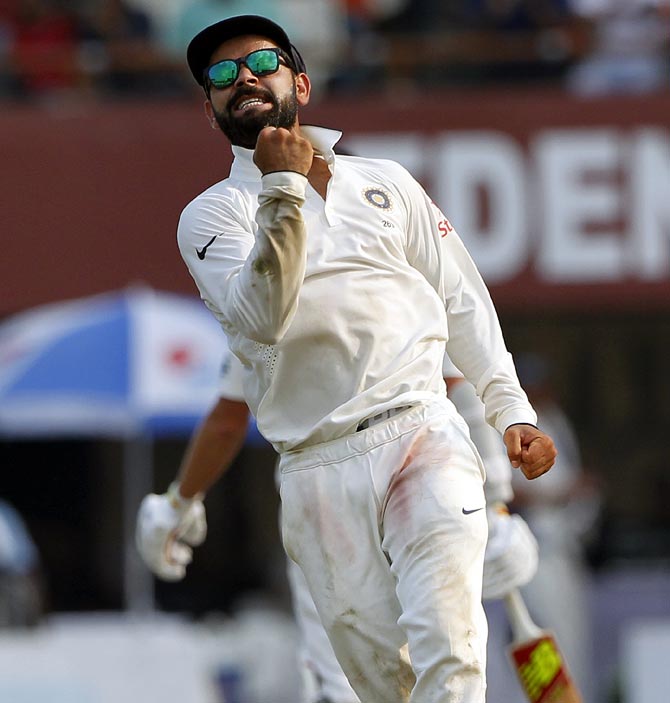 Having reclaimed the World No 1 spot in the International Cricket Council's Test rankings, a beaming Indian captain Virat Kohli on Monday said the team has a good chance of holding on to the No. 1 position given the long home season.

India dislodged Pakistan from the top following their 178-run win over New Zealand in the second Test in Kolkata, which gave them an unassailable 2-0 lead in the three-match series.

"Our objective is to keep playing consistent cricket, having rankings and getting to number one and dropping it is not in our hands, but with this long season, it's in our control in my opinion," Kohli said at the post-match presentation ceremony.

Lauding the all-round performance by his side, Kohli said runs scored by the lower-order batsmen, spearheaded by man of the match Wriddhiman Saha, proved to be crucial.

"Those extra runs in the end, Saha, and Bhuvi (Bhuvneshwar Kumar) and (Mohammed) Shami contributing in the end, was crucial. Saha was brilliant, he is the best keeper in the country, he is doing a great job in Test cricket. That hundred in West Indies really improved his confidence, he understands how to bat with the tail now."

The India skipper also had some words of appreciation for the Eden Gardens pitch.

"Lovely Test match, a brilliant Test wicket, apart from the variable bounce here and there, it will get better and better."

Batting colleague Rohit Sharma, who top-scored in the second innings with 82, also came in for praise from Kohli.

"First innings, we understood we threw it away with a few loose shots, second innings the New Zealand bowlers really put us under pressure. Really happy for Rohit as well, stuck it out, handled the pressure really well, and you know his love affair with Eden.

"More than anything, the crowd helped us pick up those wickets today. Especially someone like Shami, running in, it makes a big difference to a bowler's mindset."

New Zealand's stand-in skipper Ross Taylor also lauded the wicket, which he said the visitors were not expecting.

"Very impressive, the way the bowlers got stuck in hot, humid conditions, we put India under pressure, but credit to them for withstanding it with Saha contributing in both innings," Taylor said.

"To be honest, we thought the pitch would be different. A good cricket wicket, it's just been relaid, and is going to get better and better." India took a crucial first-innings lead of a little over hundred runs, which tilted the game in the home team's favour.

New Zealand tried to fight back by sending back three Indian batsmen quickly in their second innings, but Rohit and Saha stood firm.

"I guess anytime you have a 112-run deficit, you are always under pressure. We got some early wickets, but the partnership between Saha and Rohit took it away from us. I thought Tom Latham was outstanding today. Never been to Indore (venue for third Test) before, it will be interesting to see what the wicket will be like."

Taylor hoped regular captain Kane Williamson, who missed the game owing to illness, would be back for the third and final Test.

"Good to see Kane Williamson at the ground today, still a bit pale, but knowing him, he'll be back in the nets tomorrow."

Saha said he was under no pressure playing in front of the home crowd.

"I'm very happy for winning the series and getting my first man of the match," Saha said.

"My teammates and the crowd supported me a lot. Not much pressure. I'm just going in to bat, defending the good balls, rotating the strike, and putting the bad ball away to the boundary.

"The West Indies hundred boosted my confidence, but I didn't score much in Kanpur, that's why I took my time in the initial few balls. I just did my job behind the stumps, nothing much. I just keep watching the ball till the last, and soft hands, that's it."

Seamer Bhuvneshwar, who picked up a five-wicket haul to give his team the upper hand on day two, said, "In India we generally don't get these kinds of wickets. When you get one, you just try to make the most of it. When you contribute to a win, it's something special for you."

"Thanks to physio and trainer, they worked hard with me (on the ankle injury). Shami is the most lazy person in the team, but when he is on the field he always gives it 100 per cent. It's a sweet victory, because you don't generally get these sorts of wickets (in India) which help seamers." 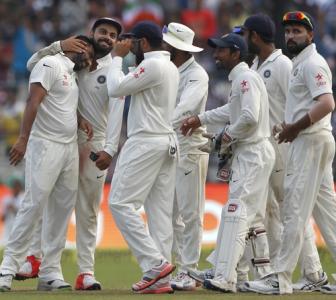 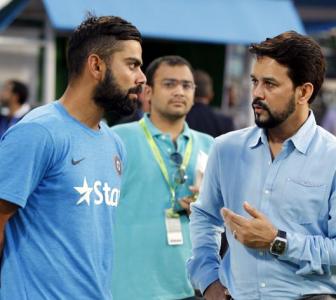 BCCI open to DRS only if it's close to perfection: Thakur