Statistical highlights at the end of the third and final cricket Test between India and the West Indies at Windsor Park here on Sunday.

# India have won two series in succession against West Indies in the Caribbean for the first time.

# West Indies have won twelve, lost five and drawn two out of the 19 Test series played against India.

# Since losing to Sri Lanka by 2-1 in 2008, India are without a series defeat, winning eight and drawing the remaining three.

# Since defeating England by 1-0 in 2008-09 in the Caribbean, West Indies are without a series win, losing five and drawing the remaining two.

# Dhoni became the only Indian skipper not to have lost a Test rubber in eleven captained by him.

# Shivnarine Chanderpaul (116 not out) posted his sixth hundred against India - his 23rd in Tests.

# Chanderpaul's tally of 16 hundreds in the Caribbean is bettered only by Brian Lara (17).

# Chanderpaul has got the Man of the Match award for the 10th time in Tests - his third against India.

# Murali Vijay (45 off 78 balls) recorded his best innings against the West Indies.

# Mukund has posted his first duck in Tests.

# Fidel Edwards (30) has registered his highest Test innings, eclipsing the 21 against South Africa at Cape Town in January 2008.

# Edwards, with 19 wickets at 20.00 runs apiece, produced his career-best in a Test series - the most for West Indies in the series.

# Suresh Raina (2-32) has registered his best bowling figures away from home.

# Sharma has adjudged the Player of the series for the second time in Tests.

# Sharma had first got the Player of the series award against Australia for taking 15 wickets at an average of 27.06 in four Tests in 2008-09. 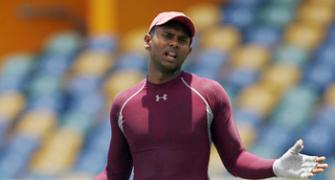