News
Business
Movies
Sports
Cricket
Get Ahead
Money Tips
Shopping
Sign in  |  Create a Rediffmail account
Rediff.com  » Cricket » VOTE: Should Kohli bat at No. 4 in ODIs?

VOTE: Should Kohli bat at No. 4 in ODIs?

Former India captain Sourav Ganguly believes KL Rahul should slot in at No. 3 and Virat Kohli should bat at number four.

Do you agree with Ganguly? Or do you think Kohli should bat at his usual No. 3 slot in ODIs where he has achieved a lot of success?

Make your pick in the Poll below at the end of the copy. Former skipper Sourav Ganguly advised Virat Kohli to bat at the crucial No. 4 position to provide solidity to the India's batting line-up in the three-match ODI series against England, starting in Nottingham, on Thursday.

Since the tour of Sri Lanka in July-August 2017, India have tried as many as six different batsmen -- KL Rahul, Kedar Jadhav, Manish Pandya, Hardik Pandya, Dinesh Karthik and Ajinkya Rahane -- at No. 4, but Ganguly feels Kohli is the best bet for the crucial slot.

"If you look at this T20I series, I think they have formed the proper batting line-up. With Rahul at number three, and Virat Kohli batting at number four, I think the problem has been sorted out. And I firmly believe it is also the right thing to do in the ODI format as well," Ganguly said at the UK launch of his book ‘A Century is Not Enough' on Monday.

"I think that's what Kohli is going to do (in the upcoming series) as well," the former skipper opined.

Ganguly is of the opinion that England lack firepower in their bowling line-up, which will give the visitors an edge in the three-match ODI series.

India started off the English summer with a bang, winning the three-match T20I series 2-1.

"England are a good side. They are a very good batting unit but bowling is the weaker part of their game. The way India won (easily) in Bristol when chasing 200 (in a T20 game), they will fancy their chances against this English bowling line-up in the ODI series," he said.

He, however, cautioned Kohli and Co. against taking England lightly in the long series.

"Off late, the Indian team has been doing well in T20Is. I have enjoyed their performance in this England series as well. But they have to be mindful that it is only the start of a long summer with ODIs and five Tests to follow," Ganguly said.

"They have set the tone for the latter contests with this win, but different formats will present different challenges for them. India should also know that they are a good unit and they can do well here."

Asked about India's strengths ahead of what should be another keenly contested series between both the sides, Ganguly said, "At the moment, India are a very good and well-rounded limited-overs' side.

"A lot of good Indian sides have been tested in England and some of the better ones have done well here and won before. I think this Indian team can be like that, they can definitely win here this summer, definitely the ODIs and possibly the Tests too."

Ganguly rates India as one of the most talented batting units in world cricket currently.

"It is one of the most talented batting units in limited-overs' in world cricket at the moment. The top-order is brilliant with Shikhar Dhawan and Rohit Sharma, and if they continue to score more runs at the top, they can challenge my partnership records with Sachin Tendulkar soon.

"Rohit, in particular, is a terrific player in the limited overs' arena and will probably end up as one of the greats in white-ball cricket," he said.

Ganguly's comments should come as a boost to India, who are starting their preparations for the 2019 ODI World Cup in England which is less than a year away.

While the team's readiness seems on schedule in most areas concerning batting and bowling, there is a gaping hole in the middle order despite the experience of MS Dhoni and Suresh Raina and the new-found exuberance of Hardik Pandya.

The former captain is also mighty impressed with wrist spinner Kuldeep Yadav's showing on this UK trip so far.

"Conditions in England can vary vastly from wicket to wicket and so every game is a different challenge. You need wicket-taking spinners on these English wickets even as they change from game to game. Kuldeep is already in the Test squad when playing at home, but he should be in the first-eleven for all formats for the Indian team," Ganguly signed off. 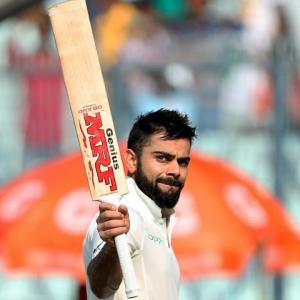