With the smell of Jamaican jerk chicken and Indian biryani wafting through stands, New Zealand beat Sri Lanka by 28 runs in the first official Twenty20 international between two Test playing nations in the United States.

The Twenty20 match on Saturday provided an unusual sporting atmosphere for the suburbs of Fort Lauderdale, the flags and shirts in the crowd revealing supporters from Indian, Pakistani, English, South African and Caribbean backgrounds.

"It was nice to see so many Sri Lankans here, I know they have flown down from many different places in the States, unfortunately we couldn't do them justice with our performance here," said Sri Lanka skipper Kumar Sangakkara.

The only element that would have jarred with supporters well used to watching cricket on television was scantily-clad cheerleaders entering the field of play, dancing at third man while the bowler was at his mark.

But there was no complaints from the fans, including a noisy contingent of Sri Lankans who had travelled down from the northern part of the United States.

"It's fantastic to see the team playing here in the States and to see people enjoying cricket," said Adusha Kotuwegoda from New York.

New Zealand captain Daniel Vettori felt the event had been a success.

"Obviously with a lot of Sri Lankans here it had a kind of sub-continent feel but it was a crowd that was entertained.

"I thought the entertainment off the field was good for the game and whilst it wasn't as high scoring as people wanted it was still a thrilling game," Vettori said.

A slow and low surface and large field at the only ICC certified cricket stadium in the United States meant the crowd got to see few boundaries, with just two sixes and 13 fours.

New Zealand made 120 with Ross Taylor striking 27 and skipper Daniel Vettori a crucial 21 not out at the back end of the innings.

Angelo Mathews top scored for Sri Lanka with 27 as they stumbled to 92 all out with two balls remaining, Scott Styris taking three wickets 10 ten runs in three overs.

The two teams meet again on Sunday at the same venue with a bigger crowd expected for a double-header featuring a clash between the United States and Jamaica.

© Copyright 2022 Reuters Limited. All rights reserved. Republication or redistribution of Reuters content, including by framing or similar means, is expressly prohibited without the prior written consent of Reuters. Reuters shall not be liable for any errors or delays in the content, or for any actions taken in reliance thereon.
Related News: United States, Daniel Vettori, New Zealand, Sri Lanka, ICC
COMMENT
Print this article
Flanagan to head ICC Anti-Corruption Unit
Hockey: Surinder Kaur to lead India in New Zealand
Schedule: ICC World Twenty20 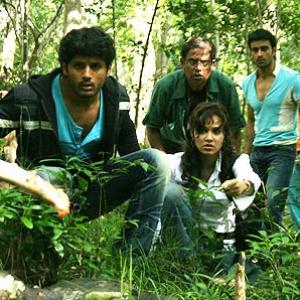 When it's cheaper to create Mumbai in Sri Lanka