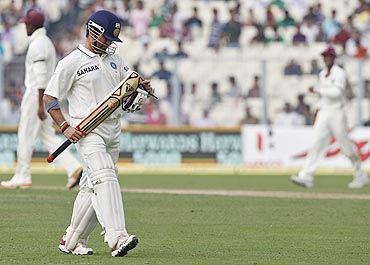 Image: Sachin Tendulkar walks back to the pavilion after his dismissal on the first day of the second Test
Photographs: Reuters

Davendra Bishoo once again dashed Sachin Tendulkar's hopes of scoring a record 100th international ton after the leg-spinner dismissed the Indian for 38 on day one of the second Test against the West Indies, in Kolkata, on Monday.

Tendulkar had faced 71 balls when he pulled a short Bishoo delivery, which turned away, to Marlon Samuels at midwicket, much to the disappointment of the crowd at the Eden Gardens.

The champion batsman, who came in at the fall of Gautam Gambhir's wicket seven overs into the post-lunch session, looked fluent during his stay at the wicket, and hit five boundaries. 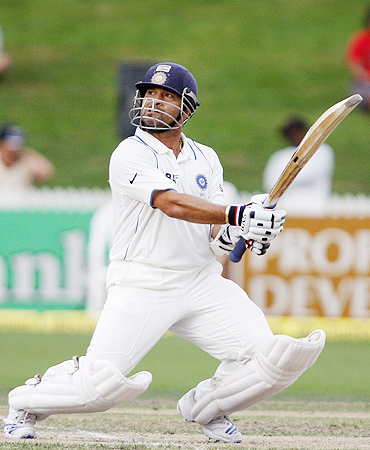 Tendulkar, however, had a bit of luck going his way as Australian umpire Rod Tucker turned down a very close appeal when the batsman was on 25.

Like in the first Test in Delhi, where he got the batsman out for 76 in the second innings, it was Bishoo again who troubled Tendulkar.

Tendulkar survived a chance when an inside-edge popped up only to fall in no man's land, though the wicketkeeper did his best to reach to the ball.

Earlier, the Mumbaikar started off with a glance off Fidel Edwards in the fourth ball he faced.The West Indies persisted with Bishoo even as Tendulkar looked in perfect frame of mind.On what looks like a good surface for batting, Tendulkar looked fluent, milking the inexperienced West Indian bowlers with ease.

But unfortunately, as the fans trooped into the venue, Tendulkar made his way back to the dressing room.

Tendulkar was looking good in the second innnings of the opening Test in Delhi, before being trapped in front by Bishoo.

Wait for Masters 100th ton only gets longer 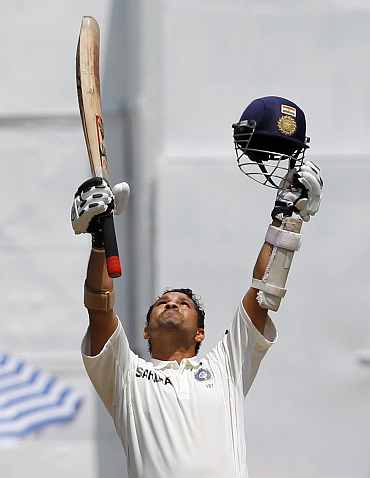 Ten Tests and four ODI innings had passed since Tendulkar got to his 99th international century, when he struck 111 against South Africa during the World Cup on March 12.

The milestone man, who has almost all the records under his belt, could have reached the landmark in the semifinal of the World Cup against Pakistan in Mohali, but fell for 85.

In the longest format, Tendulkar came agonisingly close in the Oval Test against England in July, but fell nine short of the landmark.In Delhi last week, Tendulkar was dismissed for 76.

Tendulkar's last Test hundred came in the first innings of the third and final Test against South Africa in Cape Town in January, when he scored 146 in India's 364 all out. That was his 51st Test ton.