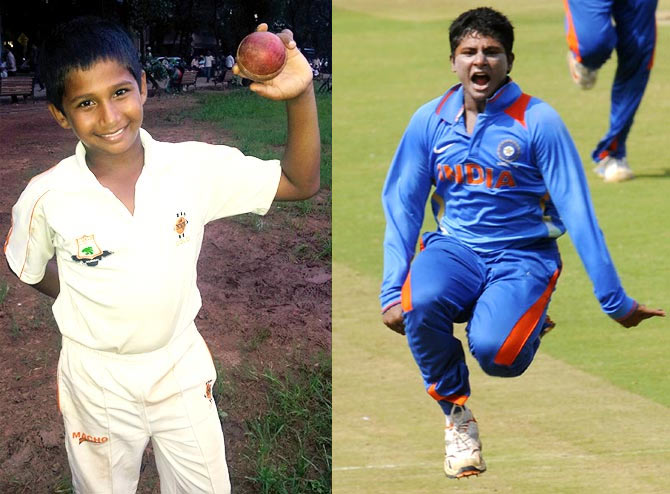 Harish Kotian meets with Naushad Khan, the father of schoolboys Sarfaraz and Musheer who, he believes, have the potential to make it to the big stage.

Mumbai cricket looks set to continue its long-standing tradition of throwing up exciting young talent. Brothers Sarfaraz and Musheer Khan are being touted as great potential for the future following their exploits in school and their respective age-group cricket tournaments.

Australia had the Waugh brothers, Steve and Mark, playing a huge role in their domination of world cricket in the 90s, Andy and Grant Flower brought a lot of joy to troubled Zimbabwe, Brendon and Nathan McCullum are well-known faces of New Zealand cricket, while Irfan and Yusuf Pathan have been part of India’s World Cup-winning squads.

Naushad Khan is determined to groom another set of cricketing brothers, who, he believes, have the talent to be among the best in the world.

Both his sons -- Sarfaraz (15) and Musheer (8) -- have become a huge hit in recent months with brilliant performances.

"It feels very good when your children start repaying the hard work you have put in them; but this is just the start. We want to achieve a lot of things. So we will keep working hard and never let fame or success impact us," Naushad told Rediff.com. 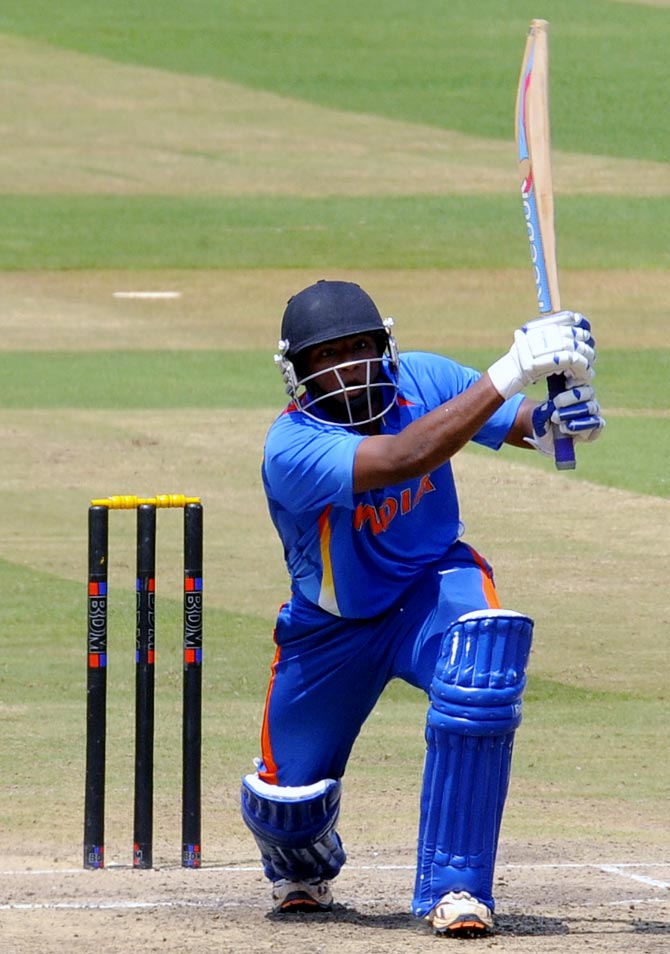 A few former cricketers believe that 15-year-old Sarfaraz has all the requisites to make it to the Mumbai Ranji Trophy squad.

Interestingly, Sachin Tendulkar also played his first Ranji Trophy game when he was 15, and that speaks the volumes for the talent that Sarfaraz has.

He recently made headlines when he played a key role in helping India win the Under-19 Quadrangular tournament, also involving Australia, South Africa and Zimbabwe, in Vishakapatnam.

He slammed 67 from 58 balls and took two wickets for nine runs as India beat South Africa by 201 runs in the final.

The Mumbai youngster was seventh in the list of highest run-getters in the tournament, with a tally of 243 runs, at an average of 81, and a best score of 101 (66 balls) which came against South Africa in the round-robin stage. 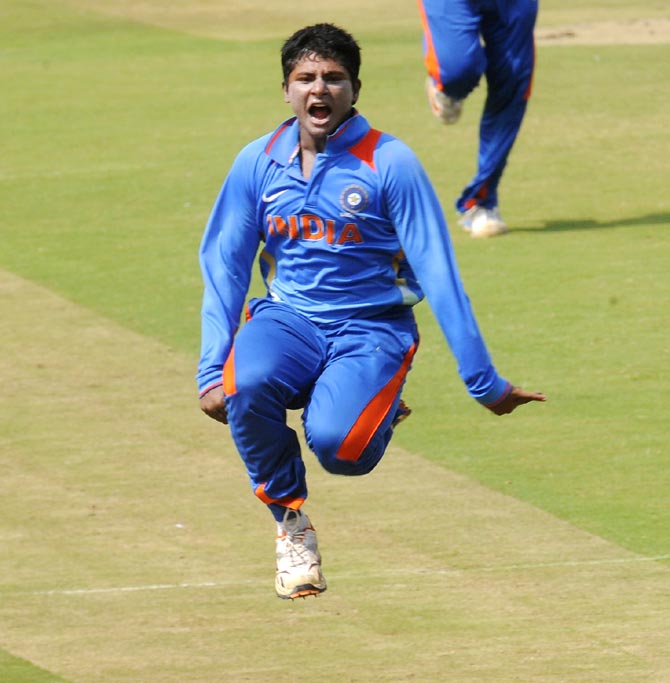 Sarfaraz rose to fame after scoring a mammoth 439 in a Harris Shield match in 2009, at the age of 12. The knock eclipsed Tendulkar's record of 326 for the highest score in Mumbai's inter-school tournament.

"In fact, Tendulkar even gifted a pair of gloves and a bat to Sarfaraz through his coach for his achievement, and that was a big motivation for him," informed his father.

But things did not go according to script for Sarfaraz.

In 2011, he was embroiled in controversy after a school accused him of being overage in the under-15 tournament. Naushad had to run from pillar to post to convince the Mumbai Cricket Association that his son was not. It was only after a bone test that the issue was resolved.

But, a year later, he found himself in a spot again. He was expelled from the BCCI camp, at the MCA indoor academy at the Bandra Kurla complex in suburban Mumbai, for disciplinary reasons.

However, Naushad says his elder son was able to weather the storm well.

"It has not been easy for Sarfaraz, but it was good he went through all this at such an early age, which helped him learn from the mistake. It is better that you make mistakes when you are learning and growing up and not when your career is in full flow.

"But I took him to a psychologist [Mughda Bavre], who is associated with the Mumbai team, and it helped him immensely; the results are showing now," he added. 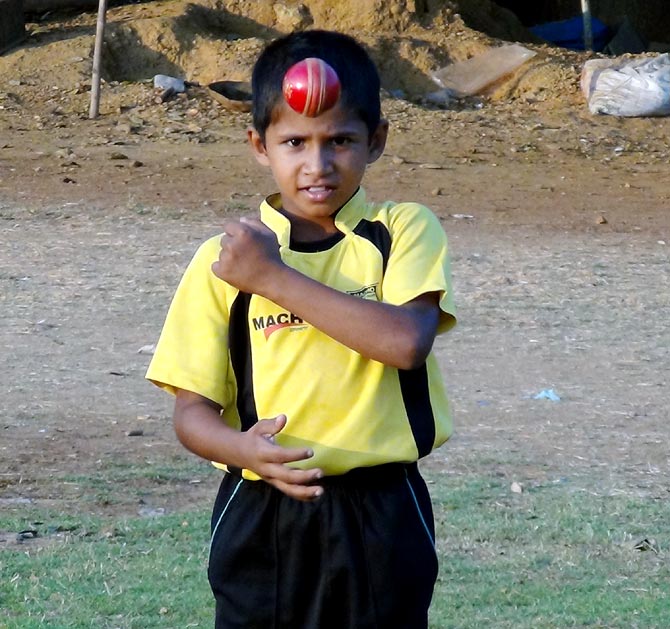 Sarfaraz’s younger brother Musheer has also caught the fancy of cricket aficionados and is defying all odds to carve a niche for himself at a very young age. The eight-year-old left-arm spinner, this year, became the youngest cricketer ever to play in the Kanga League, a club tournament which features cricketers of all ages.

Musheer, who plays for Sportsfield SC, also set another record when he picked five wickets for 78 runs against Catholic Gymkhana, bowling as many 18 overs despite five catches being dropped off his bowling.

He is the youngest to take five wickets in the tournament’s 65-year-old history.

In 2011, Musheer, aged six, played for his school, Anjuman-I-Islam Allana English school, in the Giles Shield Under-14 tournament. He was the youngest to feature in the tournament, and claimed a six-wicket haul to lift his team to a big victory, against Shailendra Education Society, which was bowled out for a mere 28 in their second innings .

But one wicket which is very special to him is that of India’s star batsman Yuvraj Singh, whom he dismissed 'stumped' during an exhibition match in Delhi earlier this year.

In fact, Yuvraj came up to him after the match and told him it was "a good delivery" and gave him an autographed ball, with the words "That was an awesome ball, Musheer"!

Even the great Bishen Singh Bedi, who worked with the boy in Mumbai, was left in awe by the young spinner’s ability to flight the ball.

"Bedi Sir told me ‘this boy has god’s gift of giving the ball flight. Don’t tamper with his bowling action or anything else. Just let him develop naturally and don’t try to change too many things by taking him to a lot of coaches. He is definitely special’," recalled Naushad, about Musheer’s training session with the great Bedi at the Khar Gymkhana recently.

While Sarfaraz has been busy travelling of late and is allowed to skip school, the young Musheer enjoys no such luxury.

"Musheer wakes up at 5 am and we go to Azad Maidan for practice -- from our residence [in Kurla] -- which starts by 6.30. After a few hours of practice he comes back for tuitions, from 10am to 1230, before he goes to school. After his school, he again practices for a couple of hours before he rests in the evening and does some more studies; he sleeps around 9 or 10," says Naushad. 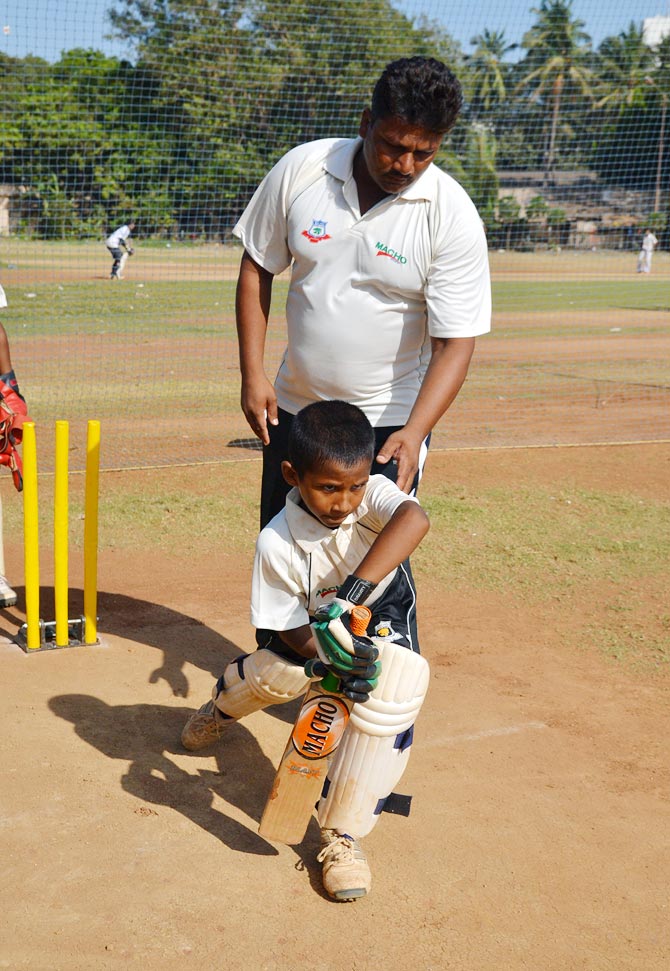 Image: Naushad Khan works with Musheer in the nets

All credit for the rise of the two youngsters’ should go to the father's dedication and commitment.

Naushad, who also plays in the same team as his sons in the Kanga League, works tirelessly for hours and hours with them in the nets.

One can say that Naushad, who failed to make it to the Mumbai Ranji team despite being among the probables, is trying to live his dream through his two sons.

But there have also been accusations that he is trying to use his sons for his personal gain and forcing them to take up cricket. His training methods are quite tough, the children being made to spend long hours in the nets. But Naushad believes the hard work will stand them in good stead.

"If people think I am forcing my children to take up cricket then they are wrong. My second son, Moin, was a good batsman but he didn’t have that much interest in cricket and he was prone to injuries so I didn’t force him to take up cricket; now he focuses on studies.

"But Musheer and Sarfaraz seemed to like cricket from a very young age. I used to coach Anjuman Islam school from 2001 to 2004 and that time I used to play with my kids with a plastic ball to see if they really liked the game. And they showed so much interest that I decided if they had the talent and were ready to work hard I would back them and that is how we started," he says, realizing it is time for him to pick the young Musheer up from his evening practice session.

"Please pray for my children; your good wishes and support are much needed," he signs off.