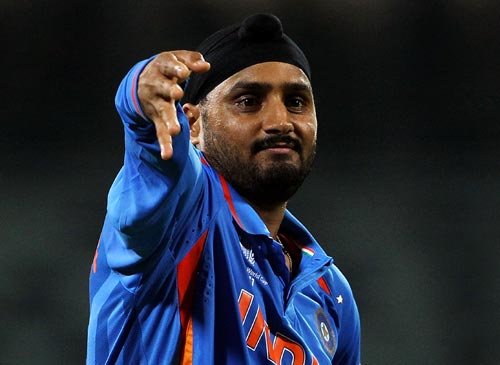 Despite Mumbai Indians registering a five-wicket victory over Deccan Chargers in an IPL match, in Mumbai, captain Harbhajan Singh was critical of the Wankhede Stadium pitch, saying "it is not a proper Twenty20 wicket".

"It is a different wicket from what we have played at the Wankhede. It is not good for T20 cricket. We never know what to expect from this track ever," Harbhajan said.

"From next time, I think we have to ensure that we know what kind of wicket we are going to play on," he added.

Asked about his side's performance, Harbhajan said, "We did not play any better than Deccan; both teams batted poorly. Of course, our bowlers did a superb job. Rohit (Sharma) batted well and Ambatu Rayudu was there to take us home."

Chargers captain Cameron White said the toss is crucial on such a wicket.

"It was an important toss, but we did not play too well. Our bowlers tried their best but the total was too small," he added.

Asked about Steyn's fiery fast bowling spell of 2/10, White said, "He (Steyn) bowled fantastic and we made a match out of it. One thing you don't want to do is to have Steyn's overs remaining with the game finished." Earlier, Harbhajan led the bowling attack from the front, picking two wickets for 13 runs, before Malinga (4/16) took charge as the Chargers lost the plot early in their innings after being asked to take first strike.

Jean Paul Duminy, who remained unbeaten on 25, was the only batsman other than the openers to get into double figures in a batting order that did not have regular captain Kumar Sangakkara, who opted out of the eleven, leaving his duties to Cameron White.

Mumbai Indians, without the injured Kieron Pollard, also fielded much better and took some excellent catches, Rohit Sharma's attempt at backward point to catch a spiralling down sphere and send back Ashish Reddy off Munaf Patel being the pick.

While Rohit was having a difficult time, Sachin Tendulkar started in sedate fashion, and hit Daniel Christian, who replaced Steyn after the latter's brilliant two-over spell for three runs, for his first boundary in the fifth over.

But the senior batsman was out in the next over off Pratap, giving a high catch to slip fielder Christian while trying to slash the ball over the fielder to leave Mumbai at 31 for 2. 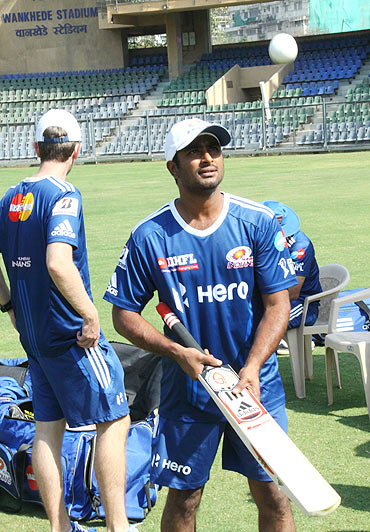 Dinesh Karthik, who came after Tendulkar's fall, did not last long once Steyn came back for his second stint and edged the Proteas pacer to wicketkeeper Parthiv Patel, the movement of the ball taking the edge of his tentative bat.

Mumbai were 45 for three, needing 56 more for victory from 69 balls.

With the asking rate not posing much of a challenge, Rohit and the left-handed Franklin put on crucial runs for the fourth wicket to ease the way for Mumbai Indians. Franklin even survived a dropped dolly by Amit Mishra just inside the third man rope off Steyn's penultimate ball.

Rohit then needlessly attempted a big hit off Duminy's wide ball while Franklin was caught behind off Ashish Reddy before Rayudu and Peterson took Mumbai past the finish line.