Images from Day 3 of the third Test between India and South Africa, in Ranchi, on Monday. India's pace prowess came to the fore yet again as Mohammad Shami and Umesh Yadav bossed over a fragile South African batting line-up to put the hosts on the cusp of a 3-0 whitewash, in Ranchi, on Monday.

As many as 16 South African wickets fell on day three of the third and final Test with Shami and Umesh doing the bulk of the damage. The duo bowled with fiery pace and were also rewarded for consistently attacking the stumps.

Staring at another massive defeat, South Africa were 132 for eight in their second innings at stumps with India needing to turn up on day four to complete formalities.

It has proved to be another dismal tour of India for the South African batsmen and notwithstanding the high quality of fast bowling, they looked like sitting ducks on Monday. Resuming the day at nine for two in their first innings, South Africa were bowled out for 162 before India enforced the follow-on.

Umesh set the tone of the day by clean bowling South African skipper Faf du Plessis with an unplayable late outswinger. If Umesh was lethal in the first innings, Shami upped his game in the second. The left-arm spinners, debutant Shahbaz Nadeem and Ravindra Jadeja, too did their bit as India steamrolled the opposition. 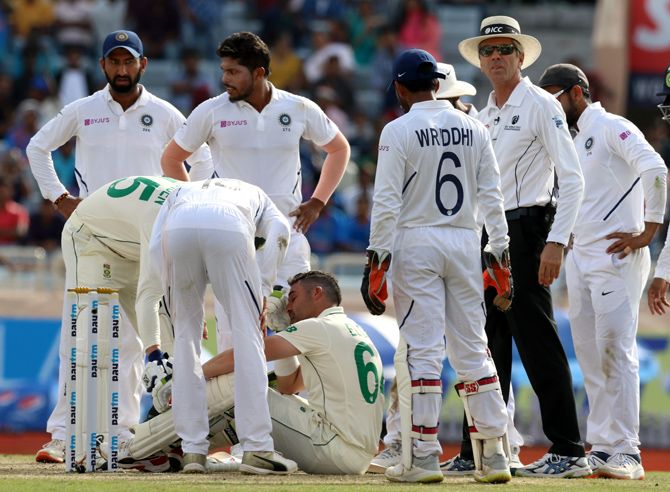 IMAGE: The Indian players check on Dean Elgar who was hit on the helmet by a bouncer from Umesh Yadav. Photograph: BCCI

Like he had done in the first innings, Umesh gave the first breakthrough in South Africa's second essay when he cleaned up Quinton de Kock (5) with a perfect length delivery that angled across the left-hander.

Then Shami ripped through the middle-order, first castling Zubayr Hamza for a duck with a full length delivery before getting rid of Faf Du Plessis (4) and Temba Bavuma (0) in successive overs to leave them gasping at 22 four in their second innings.

Tea was called after Dean Elgar was smacked flush on the helmet by an Umesh Yadav delivery with the opener, batting on 16, needing medical attention. Heinrich Klaasen was yet to open his account with South Africa still needing 309 runs to make India bat again. 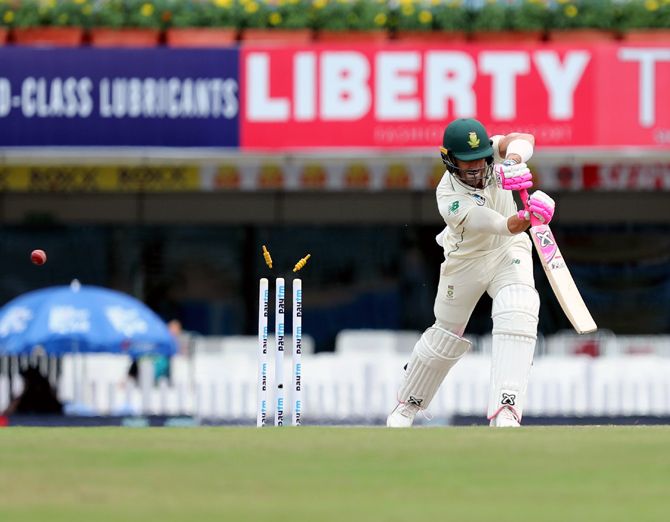 It got only worse as they lost skipper Faf du Plessis in the very first over to a beautiful delivery by Yadav.

Hamza raised 91 runs with Temba Bavuma (32) but apart from them only George Linde (37) managed double digit score for South Africa. IMAGE: Wriddhiman Saha stumps Temba Bavuma to give debutant Shahbaz Nadeem his first wicket in international cricket, on Day 3 of the third Test, in Ranchi, on Monday. Photograph: BCCI

In their second innings, South Africa were jolted early by Yadav who bowled Quinton de Kock for five.

Shami then ran through their top order, dismissing Hamza, du Plessis and Bavuma in quick successions to tighten the noose around the tourists. 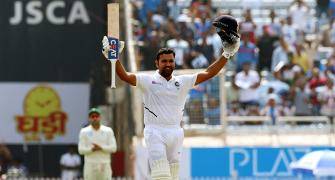