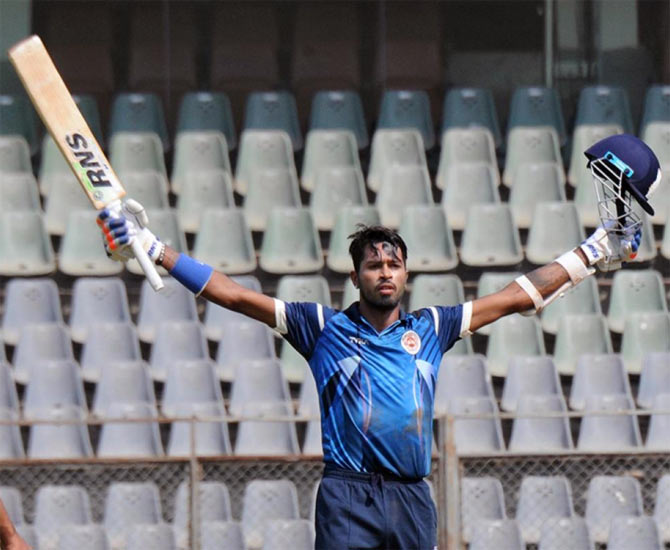 Australia-bound Hardik Pandya enhanced his reputation as a big-hitter by firing eight sixes in an unbeaten 86 which powered Baroda to a six-wicket victory over Vidarbha in the Group A Super League opener of the Syed Mushtaq Ali T20 tournament, at the Wankhede stadium in Mumbai, on Friday.

The 46-ball knock by the 22-year-old batsman, who is in the Indian team for the T20 leg of the ongoing series in Australia that follows the ODIs, helped Baroda chase down their 163-run target in 19 overs.

Coming in at one-down after Baroda lost opener Kedar Devdhar for 29 in the sixth over, the right-hand batsman, who had smacked 34 runs in an over in the side's last preliminary league phase game in a losing cause against Delhi in his home town, went hammer and tongs, especially after the 15th over when his team needed 63 off 30 balls.

He smashed three sixes off the first four deliveries of the 16th over, bowled by left-arm spinner Ravi Jangid, and in the company of skipper Irfan Pathan (26 not out in 16 balls) two sixes and a four in the 19th over, off seamer Ravi Thakur.

The winning hit by Pandya, who signalled his six-hitting prowess at the venue in the last IPL for Mumbai Indians, was a six over mid-wicket, a region he preferred to whack the bowlers to other than long-on.

Pandya, who hit three fours and was also lucky to be let off on 25 at deep extra cover off Jangid, and the left-handed Irfan stitched together a partnership of 83 off just 37 balls to flatten Vidarbha's hopes after the latter had prised out Mrudal Devdhar and two other big-hitters - Deepak Hooda and Yusuf - in quick succession.

Earlier, Vidarbha rode on a half century from Ganesh Satish (54 off 31 balls with 2 sixes and 6 fours) and useful contributions from opener Jitesh Sharma (35) and Apoorva Wankhede (40 in 24 balls) to post 162 for five in 20 overs.

In the day’s second match in Group A, Aditya Tare guided Mumbai to a comfortable six-wicket victory over Kerala.

He hit nine fours and a six in his 46-ball knock, while Siddesh Lad (36) and Abhishek Nayar (38) also chipped in with useful contributions as Mumbai knocked off Kerala's score of 160-7, amassing 164-4 with five balls to spare.

Earlier, put in to bat, Kerala rode on Rohan Prem's 45-ball 69-run knock, which was studded with seven fours and two sixes, to post 160-7 in their stipulated 20 overs.

Sachin Baby (32) and Sanju Samson (22) were the other notable contributors.

Chasing 161 for victory, Mumbai were reduced to 21 for two in three overs, with openers AA Herwadkar (6) and SS Iyer (5) back in the hut, but Tare then took upon the onus of scoring runs and shared a crucial 70-run partnership with Lad to keep them in the hunt.

Once Lad was dismissed by Basil Thampi in the 13th over, Tare and Nayar added another 48 before the former was sent back by Manukrishnan in the 17th over. Nayar then took the team home.

Unmukt's ton in vain as Gujarat win by 8 wkts

Put in to bat, Delhi lost a couple of quick wickets, including skipper Gautam Gambhir for a duck, only to see Unmukt and Aditya Kaushik (23) stitch a 54-run third wicket stand which helped the side post a competitive 170 for five.

Gujarat chased down the target in 17.3 overs.

Dhruv Shorey also went back without scoring, as he was caught and bowled by Hardik Patel.

Kaushik's wicket was the result of a splendid catch by Panchal as Nitesh Rana (9) also disappointed.

Unmukt, who became only the third Indian batsman to score three T20 centuries, took center stage, blasting eight fours and five sixes in his dominating display of the willow.

Milind Kumar (19 not out) and Pawan Negi (13 not out) also provided late entertainment in the Delhi innings.

Gujarat skipper Parthiv Patel (42) then led from the front to provide a solid 78-run opening stand with Panchal (68 not out).

Parthiv, who struck five fours and two sixes in his 28-ball knock, lost his cool in the ninth over as Panchal carried on the good work with new man Manpreet Juneja (38).

Panchal remained unconquered with his 44-ball innings that was laced with eight fours and a six.

Parvinder Awana and Suboth Bhati claimed a wicket each.

He hit four boundaries and as many sixes in his 49-ball knock and shared 112 runs for the opening wicket with Prashant Gupta (42 not out) as Uttar Pradesh comfortably chased down a target of 134 with 3.1 overs to spare.

Captain Suresh Raina, who will be doing national duty in the three T20 Internationals in Australia later this month, struck a 11-ball 20 not out, inclusive of three boundaries, to take UP to 134 for 1 in 16.5 overs and wrap the match.

Kaushal Singh was the lone wicket-taker as Jharkhand’s bowlers were hit all over the park by the marauding UP batsmen.

Earlier, put in to bat, Jharkhand scored 133 for 7 in their allotted 20 overs, Shasheem Rathour top-scoring with a 43-ball 40, while Saurabh Tiwary was the other notable contributor with a 28-ball 38.

Jharkhand found themselves on the backfoot early on as they were reduced to 28 for 2 in the fifth over before Tiwary and Rathour made a brief revival in a 53-run stand for the third wicket to take their side to 81 for 3.

But Jharkhand could not build on the momentum once Tiwary was out in the 13th over.

Number five batsman Ishank Jaggi stuck around for a 22-ball unbeaten 26 but ultimately Jharkhand ended their innings at 133 for 7. 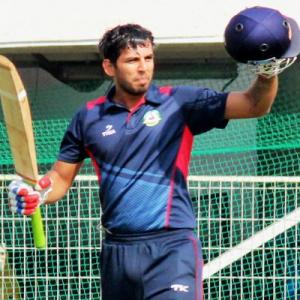 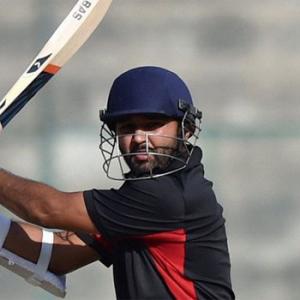