Former Pakistan captain Javed Miandad on Wednesday made it clear that he is ready to take up a coaching job with the senior or junior national side but only on short-term basis.

"Definitely I am prepared to work with senior and junior teams in a coaching capacity or as a consultant/advisor on short term basis. But I can't accept a long term coaching stint with the national team," he said.

"It is true that this offer (coaching job) was made to me by Ejaz Butt (PCB chief). But I don't want to sacrifice my role in the board just for a coaching stint. I think I can contribute more in a multidimensional role," added Miandad who is also PCB director general.

Miandad said if the board asked him to work with the team before the Twenty20 World Cup or even travel with the team as consultant he would be willing to do this.

"I can accept assignments which last around two months and I have no issues either working with the senior or junior players. I know I can play a role in putting the team back on the right track after its recent poor performances," he said.

Miandad has told parliamentary and senate committees on sports that Butt was not giving him assignments as per his expertise or services to Pakistan cricket.

The Senate standing committee at its hearing this week also appointed a sub-committee to broker a truce between Miandad and Butt. At the Senate hearing, Butt had reiterated his offer to Miandad to take up coaching assignments, insisting that the former captain's expertise lay there.

Miandad said while this was true, at the same time he felt he had a big role to play in the board as well.

"When the board asked me to go and work with the senior team before the Champions Trophy as a batting consultant, I had no hesitation in doing this. I have no ambitions to replace Intikhab Alam as coach, but yes I feel in my position I should be given the task of advising and guiding the senior and junior team and their management as well," Miandad said. 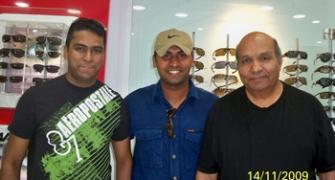