'As a captain, I feel it's a complete series for us. Everyone contributed at different times, especially the lower-order's contribution is something that stands out for me in this series' 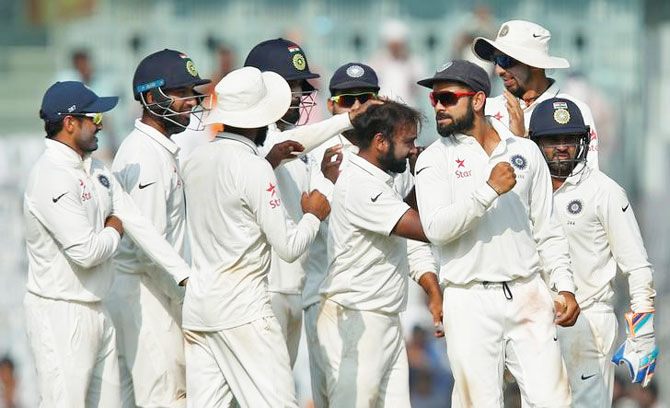 India may be on an 18-Test unbeaten streak but skipper Virat Kohli feels it is not even a "tiny bit" of what his team aims to achieve.

- How India dented England psychologically to win in Chennai\

India won their ninth Test of the year, to stretch an unbeaten run to 18 and have scripted a plethora of records, including notching up their biggest-ever series victory over England.

"As a team we have had a very good 2016 apart from two setbacks. One was the ODI series in Australia and second was World T20. We won the Asia Cup, ODI series against New Zealand in India and won all the Test series. It's been a memorable 2016 for the team and that's something I am really proud of.

"To be part of such a good year and such a good season, especially with the team in transition is something we can be really proud of," said Kohli after India won the final Test against England by an innings and 75 runs to bag the five-match series 4-0.

"But this is just the foundation that's been laid for us to carry on for lot many years. It's just the beginning. It's nothing that we want to achieve, it's not even a tiny bit of that. We understand where we want to go and hopefully the guys can keep putting this kind of effort and take the team where it belongs," he added.

Summing up the team's performance in the five-match series, Kohli said his side ticked most of the boxes.

"I would say it's a complete performance. From the time we were put under pressure in the first game to coming back and winning the next four Tests. We lost four tosses, including Rajkot but won three games out of that is very satisfying. As a captain, I feel it's a complete series for us. Everyone contributed at different times, especially the lower-order's contribution is something that stands out for me in this series." 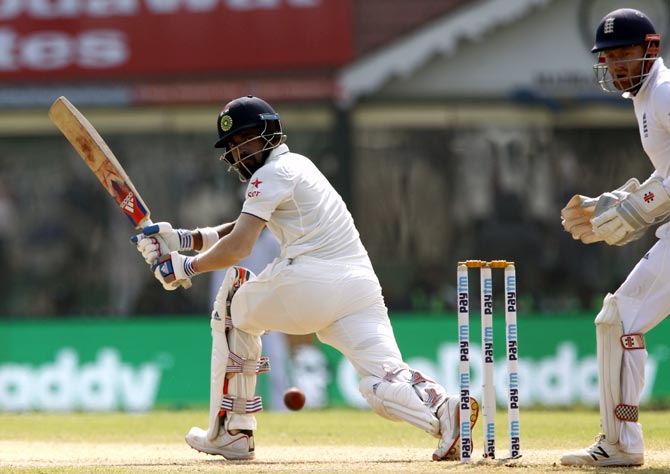 Kohli said that the quality of cricket, facilities and infrastructure must improve.

"The facilities should improve. Cricketers become professional. Their mindset becomes good. If you see, whoever comes into the team he knows there is a certain benchmark for fitness in the team, of performance, of mindset. We want players to be match-ready when they join the Indian team. You shouldn't be spending a year in international cricket just learning what to do now. You lose a lot of time in that.

Citing examples of KL Rahul and Karun Nair, Kohli said, "You can see their performance for yourself, especially Karun. Replacing a batsman like Ajinkya Rahane, who has been performing consistently in the last two years in Test cricket. To walk in and score a triple hundred. There couldn't have been a bigger statement.

"It shows that the next generation will keep getting smarter looking at others, learning how it is done. What we need to do when we reach the Indian team. It is just evolution. It is sometimes surprising looking at these youngsters, how quickly they pick things up. They are very smart and it shows on the field in how they play."

Kohli said Karun has always shown a lot of character.

"He could pull the ball well. He used his feet, drive the ball well. At No.3, when the ball is swinging, he is lethal. I've not seen anyone currently in India sweep so well against spinners. He's just the complete package. It's difficult to find guys like that, who have such character when they are batting and understand their game so well at such a young age.

"It's important to back guys like Karun. He was always our No.1 choice as a middle-order back-up. Credit to him. The chance came, just the third innings and he's done wonders. I congratulate him. He's delivered what we expected him to. He exceeded everyone's expectations." Kohli shot down opinions that the other bowlers are playing in Ravichandran Ashwin's shadow.

"We as a team don't think of these things at all. Everyone running in with the ball thinks he wants to take a wicket for India. These comparisons and scenarios are created in the outside world. That's something we don't focus on. Ravindra Jadeja takes a lot of pride in his performance. Obviously, as a bowler he wants to pick up as many wickets as he can.

"But if you see, every time Ashwin has picked up wickets, the economy rate from the other end is not more than two. Ashwin will himself tell you that Jadeja has played a massive role in him making those breakthroughs because there are literally no runs from both ends. They bowled brilliantly in partnership for us this whole season," he insisted.

"I am really happy for Jadeja, especially with the bat. We have always believed he has the ability but he himself is realising it now. He goes out and scores crucial runs for the team. He has been able to do that, so that for me has been a bigger positive. We all know how accurate he is with the ball, but the biggest plus with Jadeja for the last few months, if you ask me, has been his batting," Kohli explained.

"You have to see the kind of balance he gives the side. We don't rely on Jadeja as a bad-wicket bowler. He's a perfect bowler in any conditions in Test cricket. He is accurate and that's what you need in Test cricket. You don't necessarily need to have too many variations at your disposal, his strength is bowling at nice pace, not giving too much air to the ball and making the batsman think about how long they can defend. That's his strength. 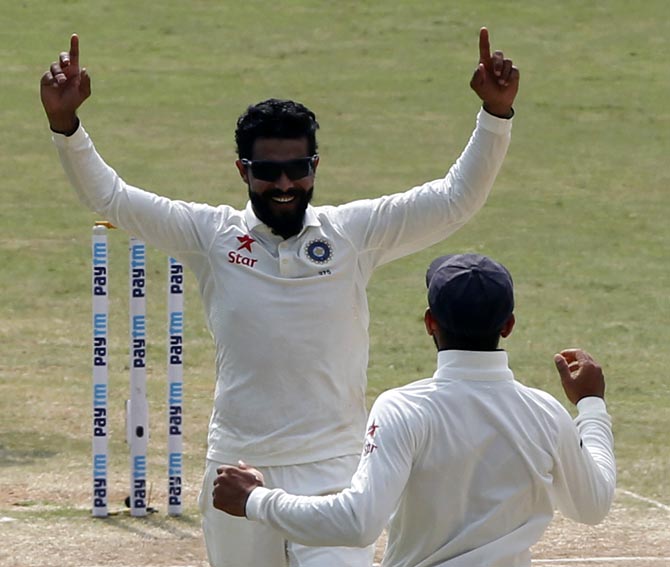 "On any wicket in the world, if you are bowling that accurately for a long time, invariably the batsman will make a mistake. That's what we have always banked upon as far as Jadeja is concerned. It's only when he delivers in a massive way that these questions start coming up that we thought this (bad-wicket bowler) about him. We as a team always believe in him. Especially in home matches, he becomes much more lethal but away as well he is someone who can give that accuracy.

On why did he bring Jadeja so late, Kohli said: "We tried initially, we created a lot of chances. Obviously when you have decent rough in front of you and when two left-handers are batting, you invariably get the off-spinner going because he can spin the ball from the stumps and Ashwin created those opportunities for us. After that it was a case of understanding that wicket was slowing down, so we might not be able get so much help from the wicket.

"So, that's the time when we brought in Jadeja because he has got that extra pace on the ball and we just wanted to keep hitting that area and he did it pretty well. We tried Amit Mishra as well from that end but we needed that extra pace on the ball. It's all about figuring out if the wicket is playing out nicely, what are the areas the bowlers can hit and it takes a bit of a time.

"You don't rush into decisions. You see what's happening on the wicket and which bowler is bowling how and then you make that call. Today he was luckily good enough and we had enough overs to bowl them out," Kohli said. 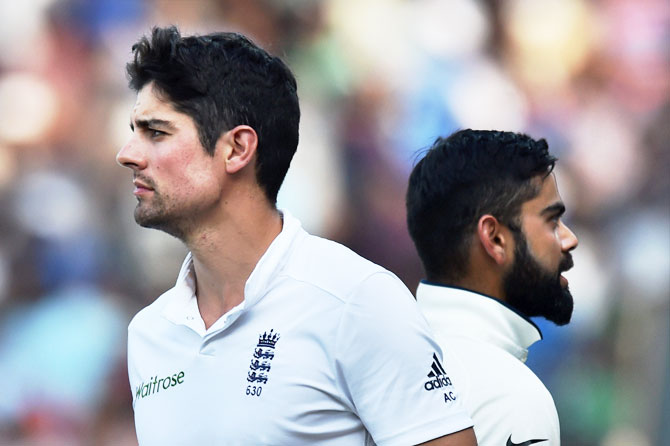 Asked about the timing of the declaration, the Indian captain explained: "It's a very tricky situation to give yourself 20 more overs, if they haven't bowled you out for in almost 200 overs. You know you don't feel like saying...this guy is close to 300 and it doesn't happen every day. It's not like he is taking 10 overs to do it. He was hitting sixes, fours. He was getting us a bigger lead. So it was a perfect scenario where he got us to a stage where we couldn't have batted again and at the same time, we had enough overs.

"If the wicket was doing enough, then those overs were good enough. If we have five bowlers, we should be able to knock teams off in 90-plus overs. That's exactly what we did. When we've played abroad, most of the teams have gives us batting on the last day. With 90 overs and a target that is achievable. It's all how you go about that particular situation. Good thing was Karun really stepped it up close to his milestone and he didn't take too long to get there.

"So it gave us five overs yesterday. This game is very unpredictable. After the first session I'm sure you guys weren't talking about all this. You would have said that 'oh it's going to be a boring draw, nothing is happening' and suddenly things happen. In Test cricket, a team can lose in one session and that's exactly what happened today," he said.

On whether he felt any sympathy for England captain Alastair Cook, Kohli said: "It's not my place to answer. I don't think he was asked this question when we played them last time in England. I don't think it's an appropriate question. Obviously the emotions they are going through they can describe it better. But I am in no position to comment on what he should do with his captaincy.

"He has played enough Tests and captained for long enough to understand what his mindset is like. I can't literally go into his head." 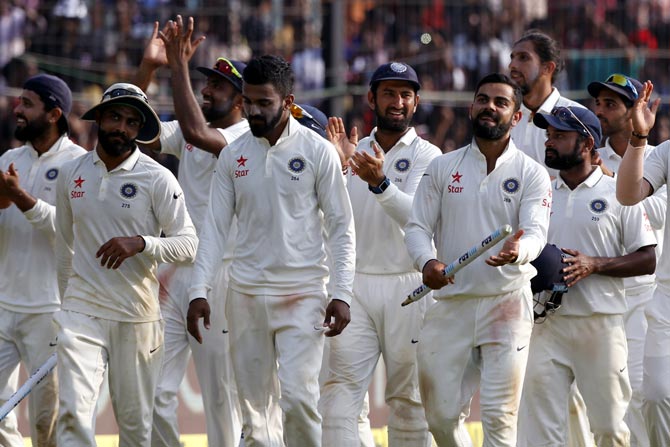 Kohli, however, admitted it is never easy when a team gets outplayed.

"We have gone through that ourselves as a team and it's never too easy. Especially when you win two tosses and you get 400-plus totals and then you have innings defeat. Obviously it's deflating for them as an opposition. I know what they would be feeling like, we have gone through the same in past as well. It's never easy for the team, that's what I can say."

Kohli feels that the crowd want to see a result oriented Test match and that is what Indian team is offering them. 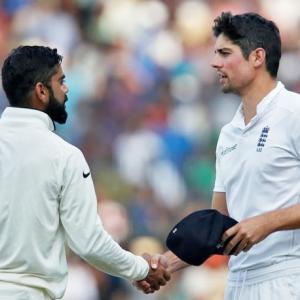