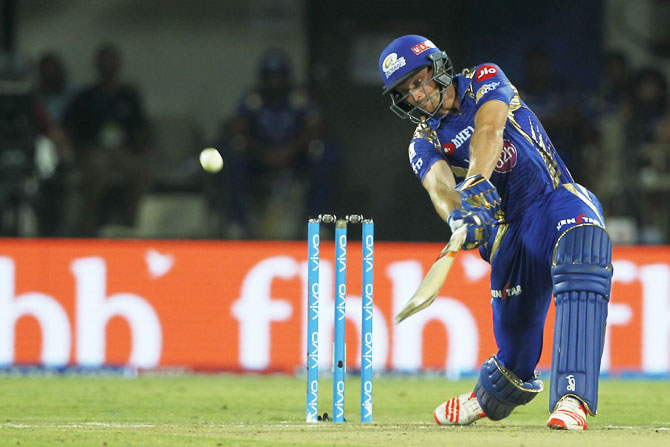 IMAGE: Mumbai Indians' Jos Buttler hammered the King's XI Punjab bowlers all over the park, scoring a brilliant 37-ball 77 to help his team sail past the daunting target. Photograph: BCCI

Jos Buttler went on a rampage with a breathtaking 37-ball-77 as Mumbai Indians cantered home by eight wickets against Kings XI Punjab maintaining their pole position in the Indian Premier League, in Indore on Thursday.

Hashim Amla's superb 103 enabled Punjab put up a competitive 198 for 4 in 20 overs but Buttler made a mockery of the target with Mumbai Indians knocking off the runs in only 15.3 overs.

If Amla was sublime, Buttler's power-packed shots were scary as he hit seven fours and five sixes, completely overshadowing the effort from the illustrious South African.

The talented Nitish Rana (62 no off 34 balls) was equally exhilarating as he also sent the Kings XI bowlers on a leather-hunt hitting as many as seven sixes. The Buttler-Rana stand got MI 85 runs in less than 8 overs. 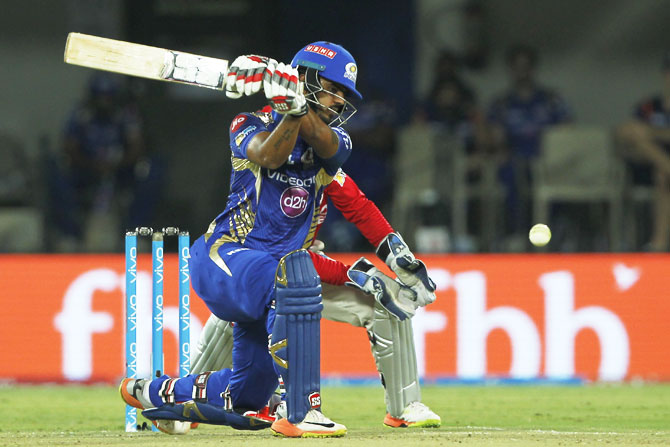 IMAGE: Nitish Rana scored a blistering 62 off 34 deliveries and has regained the 'Purple Cap'. Photograph: BCCI

Rana got the 'Purple Cap' back and finished the match with a six off Mohit Sharma.

Mumbai now have 10 points from six games having won five matches in a row while KXIP slumped to their fourth defeat.

Chasing a near 200-target needed a mandatory good start and Jos Buttler was finally up for it as he punished Ishant Sharma and Sandeep Sharma with equal disdain.

The pint-sized Parthiv Patel also matched him stroke for stroke as they finished the contest in the Powerplay overs itself, adding 81 runs. 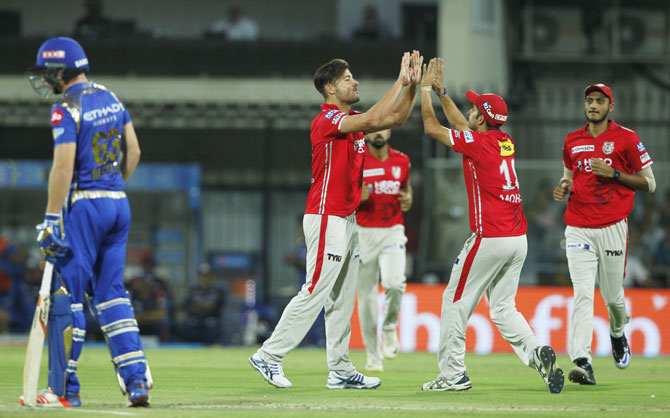 Both, Parthiv andButtler matched each other stroke for stroke as the 50 came up in the fourth over itself.

If Sandeep with his military medium pace was getting tonked by Buttler for bowling fuller deliveries, Parthiv was seen using Ishant's bounce whipping him for a six behind square.

Buttler muscled Sandeep over extra cover as Glenn Maxwell had no answer to this onslaught.      Finally, Marcus Stoinis bowled a slower one as Parthiv mistimed it to Maxwell standing at the circle at mid-off pouched an easy catch. 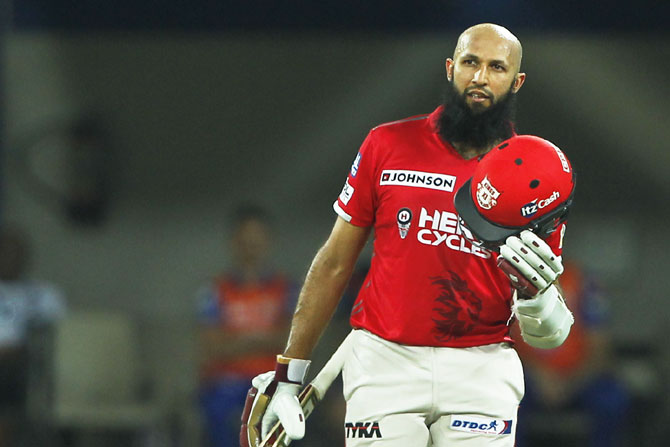 Kings XI Punjab were off to a good start with Amla adding 46 runs for the first wicket with Shaun Marsh (26).

But the partnership that really boosted KXIP's run rate was the one between Amla and Maxwell, the duo scoring 83 for the third wicket in 5.3 overs at a staggering rate of 15.09. 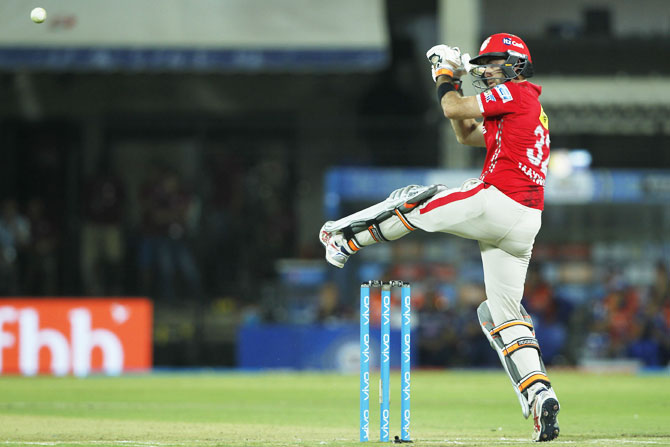 The last six overs produced an astounding 87 runs after KXIP were 111 for 2 at the end of the 14th over.

It was the 15th over of the innings were Maxwell decided to tee off taking 28 runs off the Mitchell McLenaghan over.

The KXIP skipper hit the hapless New Zealand international for three sixes and two fours as he got the required momentum.

The very next over from Malinga saw Amla punce on him taking 22 off that over and suddenly 50 runs came off two overs.

While Jasprit Bumrah cleaned up Maxwell, Amla was well set by then as he showed one and all that a century in shortest format could be scored playing all the proper cricketing shots. 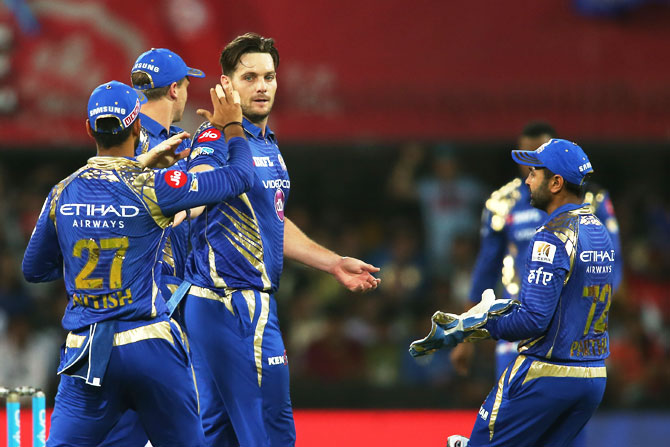 It was baffling as senior pro Harbhajan Singh, who gave away only 12 runs in 2 overs, didn't get to finish his quota of overs.

Mitchell McClenaghan was the standout bowler for Mumbai, picking up two wickets.

He made the crucial breakthrough my dismissing opener Shaun Marsh to put the breaks on Punjab’s scoring. Later in the innings, he dismissed Stonis for 1.

But Amla and Patel pushed the scoring and ended with 198-4. 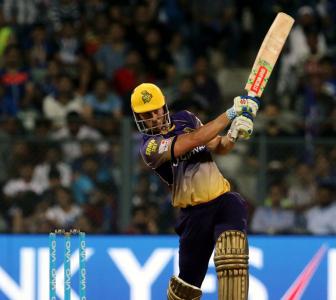 Dhoni should be respected, his removal as Pune captain disappointing: Raina