Chennai crush Mumbai to set up Punjab clash in Qualifier 2

Suresh Raina scored an unbeaten half-century as Chennai Super Kings beat Mumbai Indians by seven wickets in the IPL eliminator to seal a berth in the second qualifier at the Brabourne stadium in Mumbai on Wednesday night.

Two-time champions Chennai easily overhauled Mumbai's 173 with eight balls to spare and set up a meeting with Kings XI Punjab, who lost to Kolkata Knight Riders in the first qualifier in Kolkata earlier in the day.

Raina, the only player to score 400 runs in all IPL seasons, hit a 33-ball 54, which was laced with four fours and two sixes. He was ably supported by David

Hussey, who was also unconquered on 40 off 29 balls.

Earlier, Lendl Simmons smashed a 44-ball 67 to help Mumbai post a challenging 173 for eight in their stipulated 20 overs.

But Mumbai wrested the momentum when veteran off-spinner Harbhajan Singh dismissed the two in the seventh over. 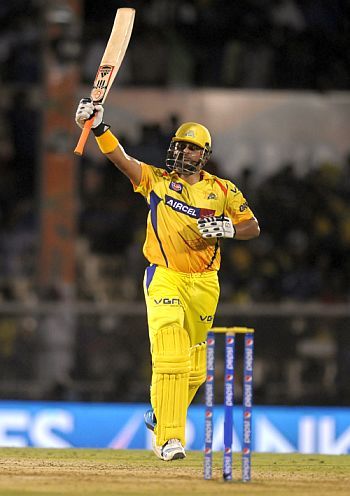 Smith struck four fours for his 20-ball 24, including three consecutive ones off Jasprit Bumrah before being caught at long-on by fellow-West Indian Kieron Pollard.

South Africa’s du Plessis, who was given a reprieve when on 16 following a misunderstanding between Habhajan Singh and Ambati Rayudu, scored 35 off 20 balls. His breezy knock was laced with five fours and a six.

Chennai suffered another setback when they lost New Zealand skipper Brendon McCullum at a score of 87, three overs later. McCullum struck two sixes in his 11-ball 14 before being stumped off left-arm spinner Pragyan Ojha.

However, one-down batsman Raina and Hussey did the repair job. The duo carted the bowlers all over the park to comfortably guide the team to victory.

Ojha was hit for 20 runs in the 16th over, with Hussey scoring two sixes over long-on and Raina following it with another in the same region.

Harbhajan Singh was the pick of the Mumbai bowlers, grabbing two wickets for 27 runs.

Earlier, the 29-year-old Simmons provided the ideal start to the defending champions along with Michael Hussey when they were put in to bat by Mahendra Singh Dhoni he won the toss.

The pair attacked Mohit Sharma in the sixth over, milking him for 19 runs, with Simmons scoring the bulk -- a four over extra-cover, a six at mid-wicket and a four over point off consecutive balls.

Hussey also looked in good touch and struck four fours and a six in his 33-ball 39.

New Zealand all-rounder Corey Anderson, who came one-down, couldn't do much damage but his 20 runs off just eight deliveries consisted of a four and two sixes.

Simmons, who has been in good form throughout the tournament, hit the bowlers all around the park and his 71 minutes' stay at the crease yielded five fours and four sixes.

The Trinidadian, the only player to have scored a century this season, looked set for another big score but perished in the 17th over while trying to hit a big shot and was caught at long on by Suresh Raina off Jadeja.

Simmons added 44 runs with skipper Rohit Sharma for the third wicket but the latter too returned to the pavilion after five deliveries. Sharma's 20 comprised three fours.

Burly West Indian Kieron Pollard chanced his arm to hit a four and a six in his 14 but his departure triggered a batting order collapse as Mumbai started losing wickets in a clutch while trying to pace their innings.

Mumbai lost Pollard, Aditya Tare (0), Ambati Rayudu (2), Praveen Kumar (1) in quick succession to find themselves reduced to 166 for eight after the Simmons' departure at 163.

Mohit Sharma was expensive as he gave away 42 runs in his four overs but the Haryana pacer picked up three wickets, after conceding 25 runs in his first two overs. Ashish Nehra and Jadeja picked up two wickets a piece.

Image: Suresh Raina celebrates after getting to 50. 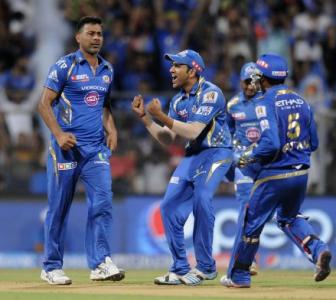 Salaam Mumbai! You revived the IPL! 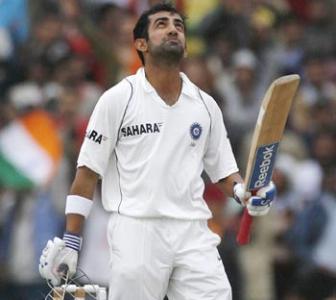 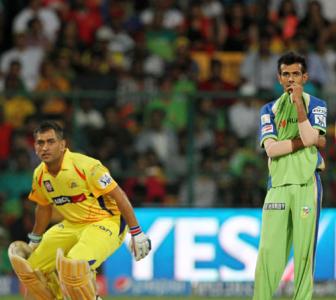 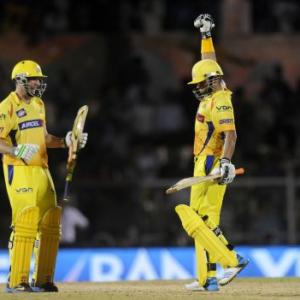 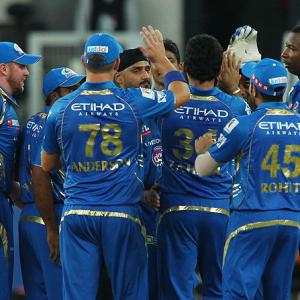