Brendon McCullum smashed an unbeaten 71 after Mohit Sharma's heroics with the ball to guide Chennai Super Kings to a comfortable seven-wicket victory over defending champions Mumbai Indians in an Indian Premier League match in Dubai on Friday.

The victory was Chennai's third on the trot while Mumbai, yet to open their account in the tournament, slumped to their third straight defeat.

Asked to bowl, Mohit (4-14) produced superb bowling at the death to help Chennai restrict the title holders to a modest 141 for seven.

Coming on to bowl the 19th over, he picked three wickets - those of Ambati Raydu, dangerman Kieron Pollard (12) and Harbhajan Singh - to prevent a late burst from Mumbai's batsmen.

Mumbai's innings mainly revolved around captain Rohit Sharma and Correy Anderson. While Rohit scored 50 off 41 balls, with the help of three fours and two sixes, the big-hitting Anderson scored 39 off 31.

In fact, the 84-run third wicket partnership between the duo was the highlight of Mumbai's innings after they lost their openers for just 25 runs inside five overs.

But once the duo departed the innings fell apart and Mumbai could manage just 33 runs off the last five overs for the loss of five wickets.

In reply, Dwayne Smith (29) and McCullum got Chennai off to a flier with a 57-run opening stand off just 38 balls.

After two quiet overs, Smith took Pragyan Ojha to the cleaners, clobbering the left-arm spinner for two sixes straight over his head to get Chennai going. Smith then slammed Zaheer Khan for another six before Brendon McCullum joined the party and struck consecutive fours to score 16 runs from the fourth over.

McCullum matched his partner stroke for stroke and welcomed Anderson with three cracking boundaries as Chennai raced to 51 in just the sixth over.

Smith, however, departed in the next over in search of one too many. He was caught by Anderson off Ojha just after smacking the bowler for a six off the previous delivery.

Chennai's most-prolific scorer Suresh Raina too was out cheaply, stumped by C M Gautam off off-spinner Harbhajan's Singh (2-27) as Mumbai clawed back into the match with two quick wickets.

But McCullum and new-man Faf du Plessis went about their business in style and stitched 50 runs for the third wicket to take Chennai closer.

While du Plesiss played the anchor's role, McCullum continued in aggressive fashion and dispatched the bad deliveries for fours and sixes.

Du Plessis scored 20 off 25 balls before he was stumped by Gautam off Harbhajan, but the wicket hardly had any impact on Chennai'S chase as they romped home with an over to spare.

Skipper Mahendra Singh Dhoni (14) was Chennai's other not out batsman.

Earlier, electing to bat, Mumbai did not have the best of starts as they lost Mike Hussey (1) and Aditya Tare (23) early.

Hussey's poor form in the tournament continued as he was bowled by fellow-Australian Hilfenhaus in the second over.

An over later, Tare perished in search of a big hit, caught by Raina off Mohit.

Anderson, who is yet to fire in the tournament, justified the team's decision to send him ahead of Rohit as he scored a fine 39 off 31 balls, with the help of three fours and one six.

Together with Rohit, Anderson shared 84 runs off 64 deliveries for the third wicket before a direct hit from Ravichandran Ashwin cut short his stay.

After failing in the first two matches, Rohit finally came to his fore and together with Anderson played sensibly.

Rohit started cautiously before opening up but departed just after reaching his fifty, caught by Smith off Hilfenhaus in the 18th over.

Thereafter, Mumbai's batsmen failed to open their arms as Chennai got their grip over the proceedings. 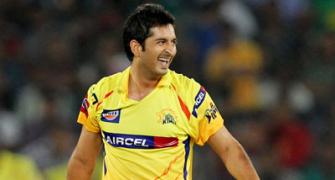 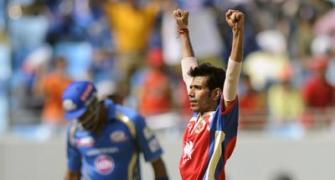 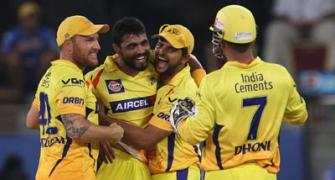 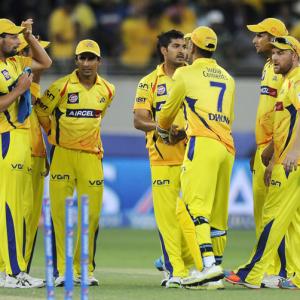 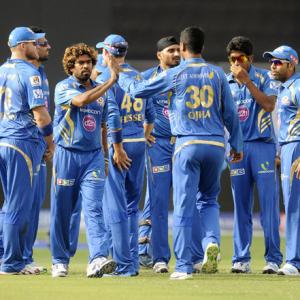