Ajinkya Rahane hit a resolute fifty and spinner Pravin Tambe scalped three crucial wickets as Rajasthan Royals notched up a 14-run victory over Chennai Super Kings to advance to the finals of the Champions League Twenty20.

Rajasthan posted a competitive 159 for eight, courtesy a 56-ball 70-run innings by opener Rahane, after they were sent into bat by Chennai skipper Mahendra Singh Dhoni.

The hosts then rode on a sensational spell of spin bowling by Tambe (3-10) to restrict the Super Kings to 145 for eight and register their 13 victory on a row at the Sawai Mansingh stadium in Jaipur. 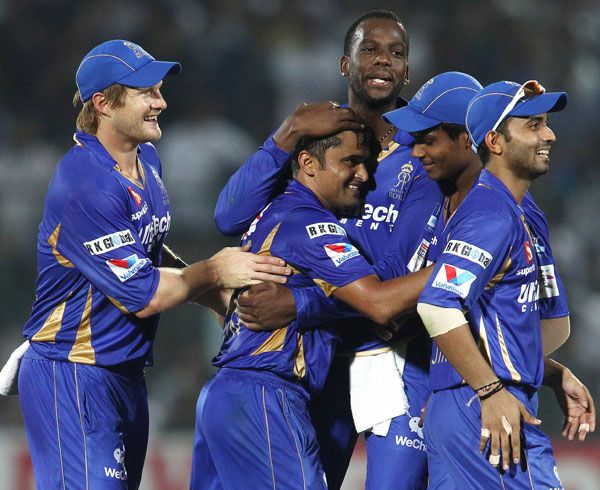 Lower-order batsman Ravichandran Ashwin blasted a quickfire 28-ball 46, studded with three fours and as many sixes, to give some hope to the Chennai side in the last stages of the match but it was not enough in the end.

Defending 159, Rajasthan were athletic on the field while Chennai looked sloppy in their running between the wickets and it cost them their first two wickets.

A terrible mix-up between Michael Hussey (9) and Murali Vijay (14) ended with the opener losing his wicket in the 3rd over, while two overs later, Vijay too run himself out with Kevon Cooper hitting the stumps directly.

However, Suresh Raina, who came as first down, clobbered the last two deliveries off Cooper for boundaries to ease the pressure as Chennai reached 41 for two in 6 overs.

Spinner Pravin Tambe and pacer Rahul Shukla then wrecked havoc on the Chennai batsmen with the former scalping the wickets of S Badrinath (8) and Dwayne Bravo (3) and the latter removing the dangerous Mahendra Singh Dhoni (3) cheaply.

Wickets kept falling like nine pins as Watson then induced an edged off Ravindra Jadeja which landed on the safe hands of wicketkeeper Dishant Yagnik.

Tambe then got rid off Raina, who was holed out by substitute Ashok Menaria at mid-off as Chennai was looking down the barrel at 72 for seven in 12.3 overs.

However, a 43-ball 73-run partnership between Ashwin and Chris Morris (26) for the eight wicket kept Chennai in the hunt till the last over.

Needing 23 runs in the last over, Ashwin blasted the first ball for a six but bowler James Faulkner made a quick recovery to restrict them comfortably in the end.

Earlier, Rahane blasted six fours and two sixes in his half-century and shared a 59-run partnership in 39 balls with Shane Watson (32) for the fourth wicket to lay the foundation for Rajasthan's innings. The Mumbaikar anchored the Royals innings but the hosts could not get their partnership going and lost three wickets in the last over to settle within 160-mark.

Put into bat, Rajasthan lost their captain Rahul Dravid early once again when he was dismissed by Chris Morris in the third over. In the next over, Kevon Cooper too was sent back to the hut when Mohit Sharma had the batsman caught by S Badrinath at extra cover to reduce the Royals to 29 for 2.

Opener Ajinkya Rahane took the onus on himself and along with Sanju Samson (11) kept the scoreboard ticking. The duo took the hosts across the 50-mark. However, Rahane lost this third partner in the ninth over when Jason Holder induced a top edge from Samson, which went high into the air before handing safely in the hands of R Ashwin at midwicket.

Australian allrounder Shane Watson (32) then joined Rahane and the duo recovered the Rajasthan innings with the former taking the hosts across the 100-mark with a four across the midwicket fence off Bravo.

In the 14th over, Rahane brought up his third fifty in the tournament with a boundary across the short-fine leg area. After two boundaries in the 15th over, Watson was back into the pavillion when Holder held on to a high catch which flew off a thick edge from the Australian.

Brad Hodge (11) gave company to Rahane for sometime before being dismissed by Holder, who cleaned him up with a yorker in the 19th over.
Rahane too was dismissed in the next over when he tried to a play a Bravo delivery across the leg side. Dishant Yagnik (0) and Stuart Binny (5) too were dismissed in the same over.

Image: Pravin Tambe of Rajasthan Royals is congratulated by teammates Shane Watson, Kevon Cooper, Sanju Samson and Ajinkya Rahane after getting the wicket of Suresh Raina of Chennai Super Kings 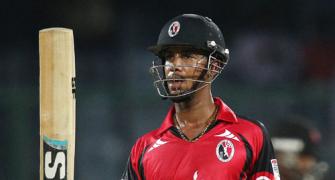 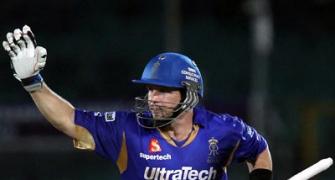 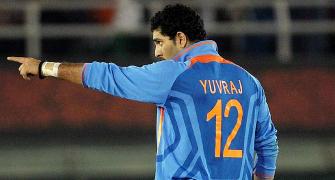 Yuvraj forces way back, but no place for other seniors in ODI team 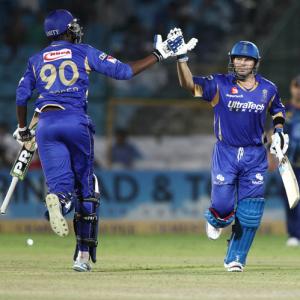 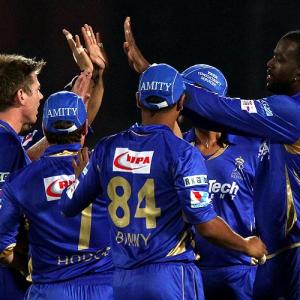