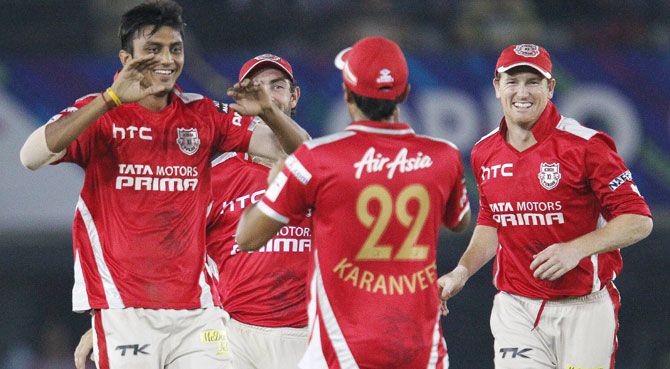 Akshar Patel of Kings XI Punjab celebrates with his teammates after taking a wicket. Photograph: BCCI

Kings XI Punjab put up yet another dominating performance as they outclassed Northern Knights from New Zealand by a whopping 120 runs in Mohali to enter the semi-finals in their maiden appearance in the Oppo Champions League T20.

Put into bat, Kings XI Punjab puty up a massive 215 for five, courtesy blazing half-centuries from openers Manan Vohra (65 off 32 balls) and veteran Virender Sehwag (52 off 37 balls) and century opening stand between them.

In reply, Northern Knights started off well in Powerplay overs before their chase ran out of steam to be skittled out for paltry 95 in 15.2 overs.

KXIP with three wins from as many matches now have 12 points to their credit and have clinched a place in the semi-finals with four other teams fighting for the other three spots. 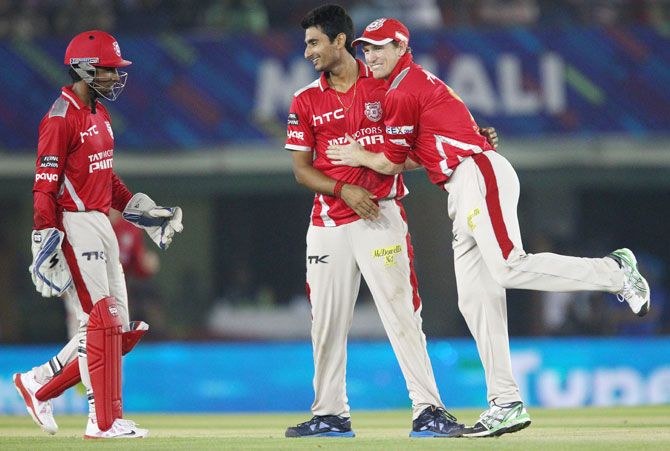 Karanveer Singh of Kings XI Punjab celebrates with his teammates after taing a wicket. Photograph: BCCI

The 'Pink Panthers' from New Zealand, who had done well at the start of the tournament, found it difficult to handle the young spin duo of leg-spinner Karanveer Singh (4-15 in 3.2 overs) and left-arm spinner Akshar Patel (2-16 in 4 overs) during the middle overs.

In the eight overs bowled between them, they snared six wickets with only 31 runs being conceded in 7.2 overs. Once batting mainstay Kane Williamson (20) was caught Wriddhiman Saha off Thisara Perera and Akshar got Anton Devcich (28) caught by Karanveer, there was no way that
Knights would have chased the target.

KXIP were brilliant in the field with Glenn Maxwell and Saha effecting couple of brilliant run-outs. Earlier, Sehwag turned the clock back in company of immensely talented Vohra as their half-centuries propelled Kings XI Punjab to a commanding 215 for five after being put into bat.

While Vohra showed the exuberance of youth in his 32-ball 65, Sehwag displayed glimpses of his old self in a 37-ball-52 as their opening stand of 102 laid they foundation for a formidable total.

Vohra took full advantage of the Powerplay overs as he repeatedly beat the infield with his audacious hitting. It started with a straight drive followed by a flick of Trent Boult. All Vohra did was to plonk his front-foot and hit through the line and occasionally clearing the front leg to clear the in-field over short third-man. 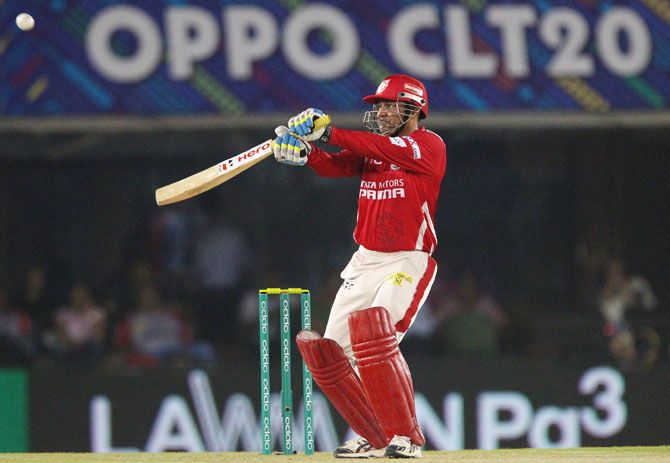 With Sehwag also setting the tone with a signature upper cut for six off Scoot Kuggleijn, there was simply no looking back for the Kings XI.

The 50 came in 4.5 overs and Vohra completed his own half-century off 28 balls with a lovely cut shot off part-time left-arm spin from Anton Devcich.
The six Powerplay overs yielded 71 runs but there was no stopping Vohra.

When leg-spinner Ish Sodhi came into the attack, Vohra rocked back to smash him over long-on for a six and followed with a slog sweep that went over to the cow corner.

In his bid to get the third six off Sodhi, Vohra mistimed a pull-shot when the leggie bowled a half-tracker only to be caught at square leg fence. Vohra-Sehwag opening stand yield 102 runs. The former India U-19 opener's 32-ball-65 had eight fours and three sixes.

Sehwag, who batted in his inimitable style lofted Sodhi over extra-cover boundary to reach his 50 off 35 balls. He was out for 52 when Kugggeleijn trapped him plumb-in-front for 52 which had five fours and a six.