Rain puts Mumbai Indians on the brink of exit

Mumbai Indians found themselves on the brink of exit from the Champions League Twenty20 after rain washed out their Group B match against Yorkshire in Cape Town, on Thursday.

Having been put in to bat, defending champions Mumbai Indians made 156 for six from 17.5 overs when heavy rain caused the match to be called off at the Newlands stadium.

For Mumbai, who had lost their opening match against Highveld Lions, it was a stop-start performance after they were sent into bat with wickets falling at regular intervals before Kieron Pollard cut loose with a quickfire 37 not out from 20 balls.

None of the Mumbai batsmen could carry on after getting good starts and the highest partnership was the 36-run stand between opener Dwayne Smith (37) and Rohit Sharma (25) for the second wicket. 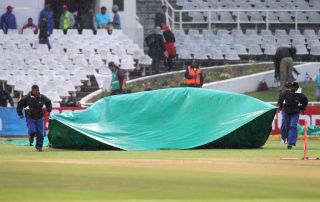 The players came back into the field twice only to leave it immediately due to rain. When the first rain break came after the completion of the 17th over, Mumbai were 145 for six and Pollard hit a six from one of the five balls that were bowled before another rain break to take his side to 156 for six.

Earlier, Smith gave a dramatic start to the Mumbai innings as he smashed off-spinner Root, who opened bowling for Yorkshire, for two consecutive sixes from the second and third balls of the match.

The other opener Sachin Tendulkar (7) looked in good touch as he played a lofted drive for a boundary in the second over bowled by Ryan Sidebottom. But in the next over, he had to depart run-out after a mix-up with Smith.

Tendulkar darted down for a single after playing a mistimed shot towards mid-on but with Smith not responding, he had to run back to his end. Before Tendulkar could regain his crease, Yorkshire wicketkeeper Dan Hodgson had dislodged the bails after collecting a quick throw from Gary Ballance.

Mumbai batted quietly for some time, reaching 34 for one after five overs with Smith repeating the smashing he gave to Root in the first over by hitting two consecutive sixes in the eighth over bowled by the same bowler.

But Root had the last laugh as he dismissed Smith in the same over with the batsman failing to take advantage of a full toss and holed out to Steven Patterson near the boundary. Smith faced 26 balls for his 37 which he made with the help of four sixes.

Dinesh Karthik (12) hit two fours as soon as he came out as Mumbai Indians cruised along, reaching 75 for two at the halfway stage.

But two quick wickets in the space of two balls put Mumbai at the backfoot with Rohit and Karthik departing after promising a lot.

Rohit launched himself for a six against Azeem Rafiq but was dismissed the next ball, the last of the 11th over, as he  failed to negotiate a yorker-length delivery for his stumps to be disturbed. Rashid then dismissed Karthik with the first ball of the 12th over with the batsman hitting straight to Azeem Rafiq.

Mumbai stuttered and they were dealt another blow with Ambati Rayudu (15) dismissed by Azeem Rafiq after his captain Andrew Gale won a review for the catch at covers from the third umpire.

Mumbai were 109 for five in the 15th over but captain Harbhajan Singh would not give up without a fight. He lifted Rafiq for two sixes from the three remaining balls after Rayudu's dismissal and then Pollard struck a six and two fours  off Rashid to give Mumbai the chance of a challenging total.

Harbhajan departed soon after while trying for a big hit off Rashid just before rain played spoilsport. 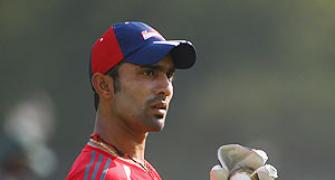 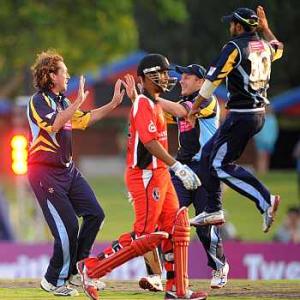 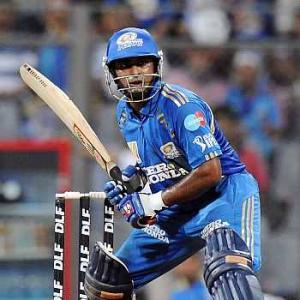