It was the first time in the history of Indian cricket that three players -- Ashwin, Jadeja and Jayant -- batting at No 7 or below have scored a half-century each in the same innings. 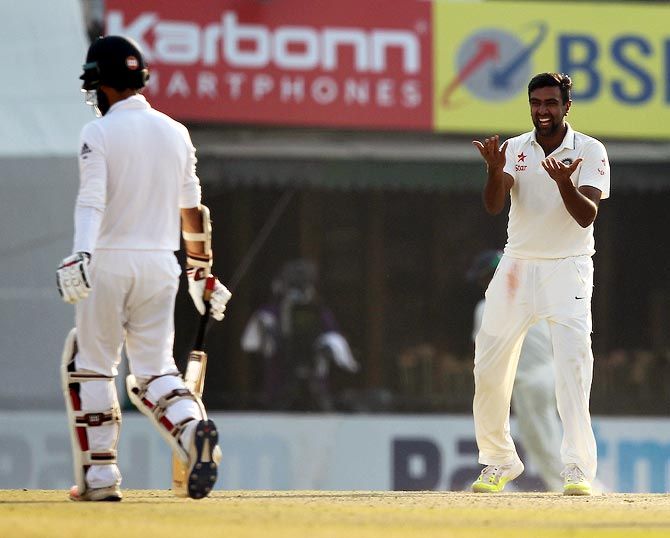 Ravichandran Ashwin kept his team firmly on course for yet another comprehensive victory, outclassing England on all counts at the end of the third day's play in the third Test in Mohali, on Monday, November 28.

Earlier in the day, Ravindra Jadeja smashed his way to a career best 90 while Ashwin hit 72 as the Indian lower middle order once again put up a power-packed performance to lift India to a commendable 417 in the first innings, a 134 run lead.

Having set up the match with a well compiled half-century, Ashwin then troubled England with the ball as he claimed 3/19 in 12 overs -- Captain Alastair Cook (12), Moeen Ali (5) and Ben Stokes (5).

Young off-spinner Jayant Yadav bagged the key wicket of the in-form Jonny Bairstow (15), who had hit 89 in the first innings.

England's batting mainstay Joe Root, who opened the innings in place of the injured Haseeb Hameed, was unbeaten on a cautious 36 from 101 balls at stumps with nightwatchman Gareth Batty at the other end. 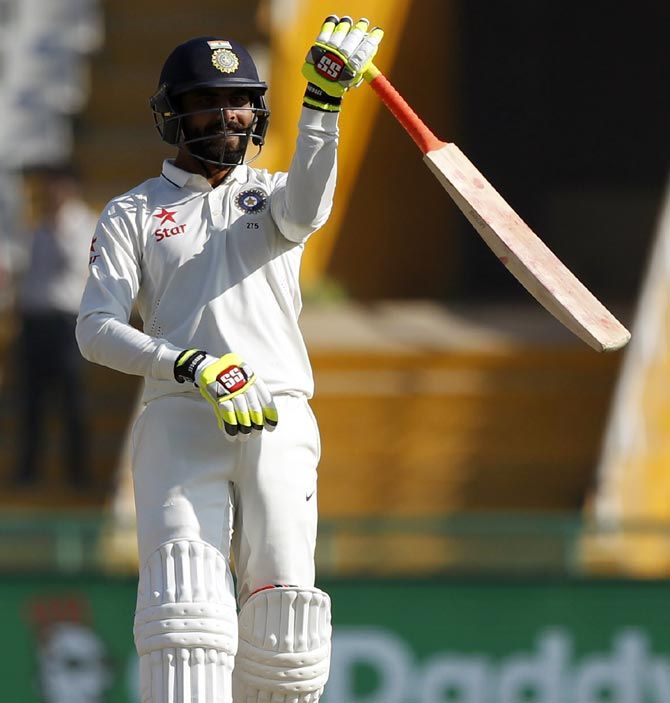 On a pitch where English off-spinners Moeen Ali and Gareth Batty looked ordinary, Ashwin, with his length and deception, looked potent, capable of taking a wicket with every ball.

Cook survived a couple of close calls against Ashwin before the off-spinner bowled one that angled in. The English skipper played down the wrong line and ended up dismissed by the same bowler for the second time in the match.

Moeen, batting at No 3, looked to attack Ashwin, didn't reach to the pitch of the delivery and was caught by Jayant at mid-on.

The highlight of the first two sessions was Ravindra Jadeja's sparkling 90 off 170 balls, laced with 10 fours and a six.

His partnership of 97 with Ashwin was crucial in India's revival after they were reduced to 204/6 on Sunday afternoon.

Not to forget the 80 run stand he shared with rookie Jayant Yadav, who hit a maiden half-century (55) in just his second Test.

Jayant, India's find of the series, once again impressed with his fighting qualities as his gutsy innings ensured that India scored 400-plus for the third consecutive time in the series.

For the record, no visiting team has won against India after having conceded a 65 run lead in the first innings.

The last time it happened was 52 years ago, in 1964, when Bob Simpson's Australia won after conceding a 65 run first innings lead. 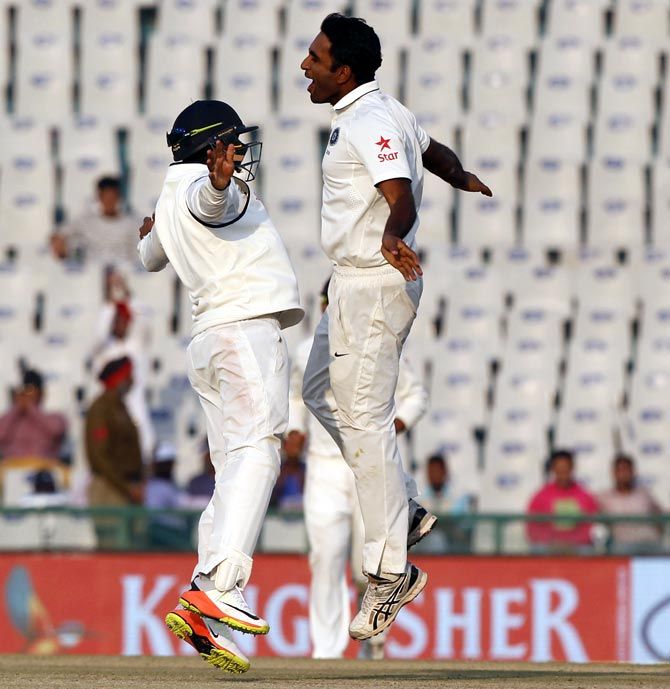 It was the first time in the history of Indian cricket that three players -- Ashwin, Jadeja and Jayant -- batting at No 7 or below have scored a half-century each in the same innings.

Jadeja started the post lunch session in style as he hammered Chris Woakes for four boundaries in an over to take his score to 90.

He missed out on a well deserved century when he was caught at long on off Adil Rashid in the next over. 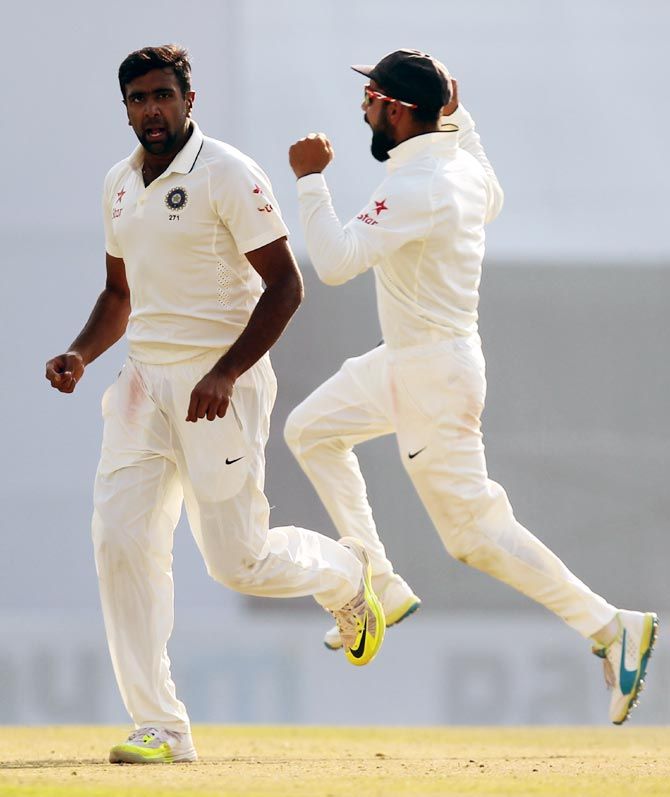 Jadeja continued to keep the runs coming. The Saurashtra all-rounder pushed Rashid for a single and celebrated his 50 with his swirling the bat like a sword, Rajput style.

As if to drive home a point, he flat batted Stokes over mid-on for a boundary soon after.

Jayant Yadav showed his batting prowess for the third consecutive inning as he on drove and square drove the mighty Jimmy Anderson. His half-century came from 132 balls. 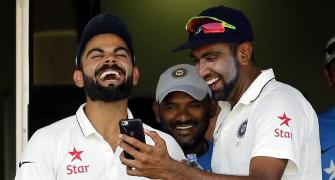 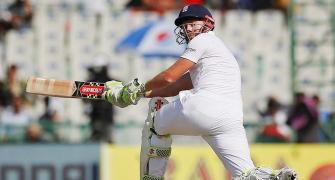 Stats: Bairstow is highest run-scorer in Tests this calendar year 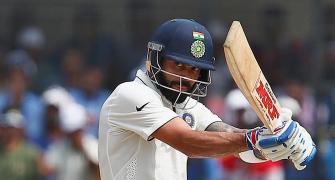 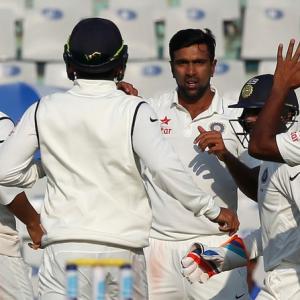 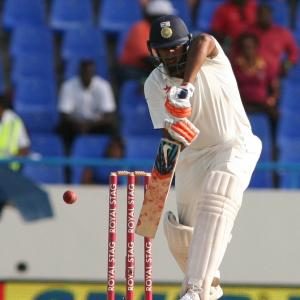