The Centre assured foolproof security to the Pakistan team during its upcoming India tour to play limited over cricket series beginning December 25.

-Why Gavaskar is unhappy with Pakistan's tour of India

His comments came in the wake of Shiv Sena supremo Bal Thackeray opposition to the Indo-Pak cricket series, saying his party won't allow Pakistan cricket team to play in India.

"The matches will happen as per schedule. Those opposing it should take the game as game only," Singh said.

Home Ministry sources said the Central government will ensure three-tier security to the Pakistan cricket team during the matches and their practice in stadiums.

The series would comprise three ODIs and two Twenty20 Internationals between December 2012 and January 2013. The ODI matches will be played in Chennai, Kolkata and New Delhi and the Twenty20 games in Bangalore and Ahmedabad.

The two countries have not played a bilateral series since Pakistan's tour of India in 2007. Cricket ties between the two countries were snapped following the 2008 Mumbai terror attacks. 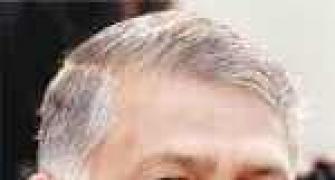