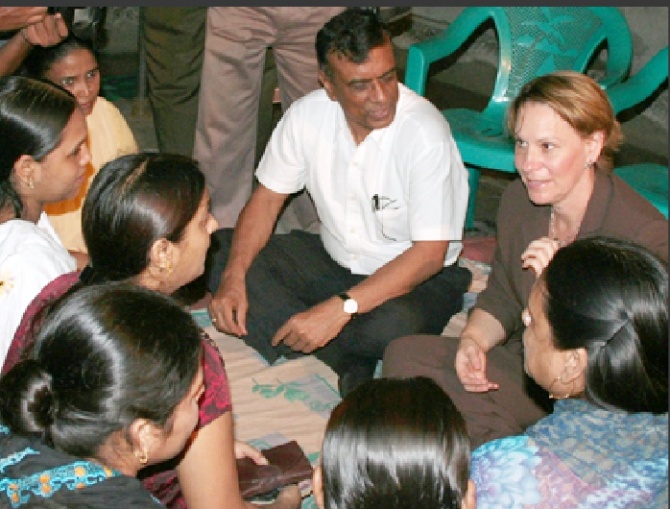 Bankers and industry analysts are almost certain that Bandhan’s presence at rural centres of eastern and northeastern states influenced RBI’s decision of giving it a banking licence, say Somasroy Chakraborty and Manojit Saha.

That Bandhan has become the country’s first micro lender to win a banking licence might have surprised some, who could be wondering what gave the Kolkata-based entity an edge over others in contention.

A look at the regions where the microfinance institution is present gives a hint.

Bandhan Financial Services has a strong presence in the under-banked eastern and northeastern regions of India.

Besides, its balance sheet strength to serve the rural population could have been a clincher and given the Reserve Bank of India a valid reason to prefer the micro lender to large industrial houses.

Bandhan, one of the two companies to get RBI’s ‘in-principle’ approval for banking licences, was not only picked ahead of Anil Ambani’s Reliance Group, Kumar Mangalam Birla-controlled Aditya Birla Group and the Bajaj group, but chosen over Bengaluru-based microfinance rival Janalakshmi Financial Services. 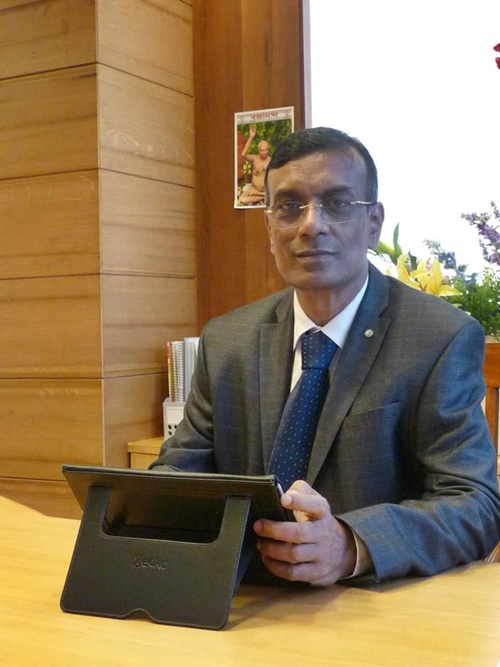 Bankers and industry analysts are almost certain that Bandhan’s presence at rural centres of eastern and northeastern states influenced RBI’s decision of giving it a banking licence.

“I would think geographical location was a key factor.

“Bandhan is located in East India, most of which is financially excluded.

“While economic growth in certain eastern states like Bihar has picked up in recent years, there still are a lot of unbanked villages in this part of India. To my mind that could be one of the main reasons,” said Shinjini Kumar, leader (banking and capital markets), PwC India. 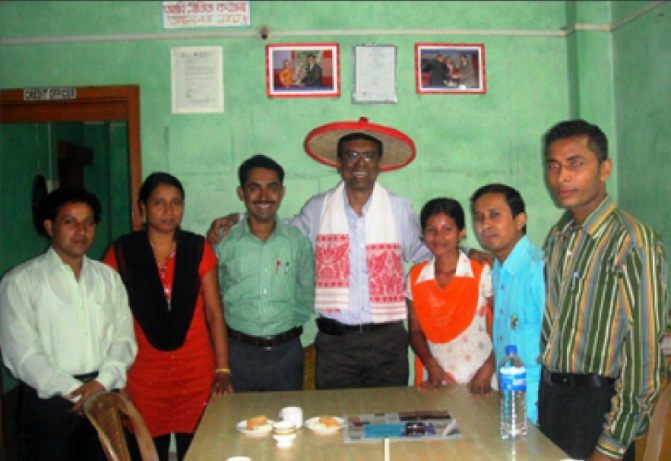 Image: The CMD with team members at a branch office in Assam.
Photographs: Courtesy, bandhanmf.com

Bandhan has 2,016 branches across 22 states and Union Territories -- a majority of these in eastern India.

West Bengal, with as many as 802 branches, accounts for nearly half its network. Bandhan also has around 400 branches in the eastern states of Bihar, Chhattisgarh, Jharkhand and Odisha.

The micro lender also has a sizeable presence in the Northeast, with 286 branches in Assam and another 100 branches in Tripura, Meghalaya, Sikkim, Manipur and Mizoram.

In December 2013, RBI Executive Director P Vijaya Bhaskar had said in a speech on financial inclusion that the penetration of financial services in central, eastern and northeastern regions was lower than that in other parts of the country. 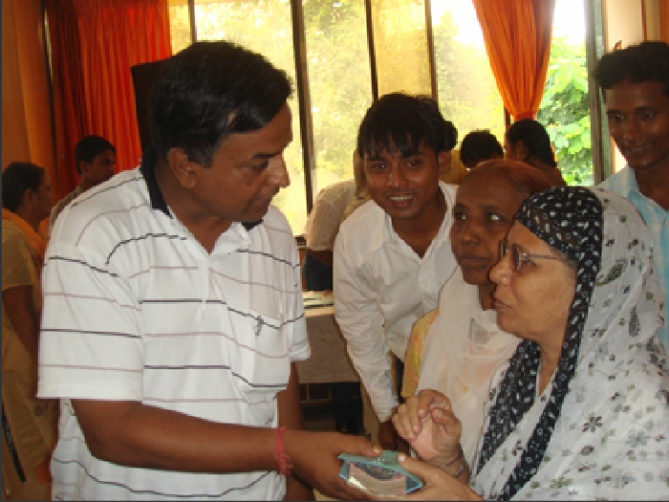 “All three regions together account for 64 per cent of all financially-excluded farmer households in the country.

“But the overall indebtedness of these three regions to formal sources of finance account for only 19.66 per cent,” he had said.

According to a banker, Bandhan was probably picked ahead of Janalakshmi because the latter focused more on serving the urban poor.

“Also, as many as seven banks are headquartered in Karnataka, compared with three in West Bengal,” the banker said.

Janalakshmi, the other micro lender to apply for a licence, did not hide its disappointment.

“We are obviously disappointed -- we gave it our best shot but fell short.

“However, we continue to push ahead, we have terrific plans for our current business as an NBFC, and will continue to execute that with gusto.

“We will be keen to reapply as and when the RBI bank licence window opens again,” said Ramesh Ramanathan, chairman of the Janalakshmi group. 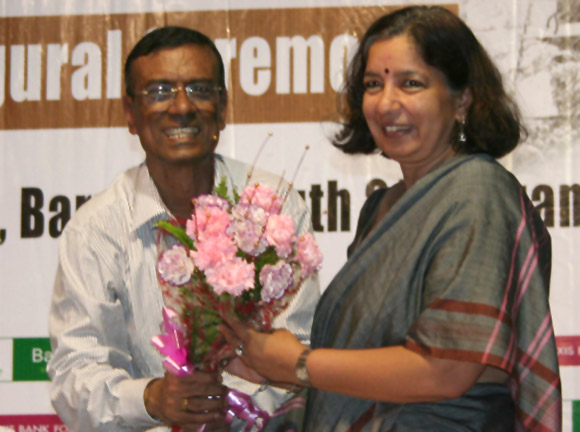 In addition, the fact that International Finance Corporation and Small Industries Development Bank of India are its investors gives the regulator the confidence on the corporate governance front.

Bandhan emerged the country’s largest micro lender after Hyderabad-based SKS Microfinance’s business suffered due to a crisis started in October 2010 in the sector in Andhra Pradesh.

As at the end of February this year, Bandhan had Rs 5,704-crore (Rs 57.04-billion) worth of loans outstanding.

It disbursed Rs 963 crore (Rs 9.63 billion) in loans during the month and counted 5.2 million borrowers as its clients.

The microfinancier has reserves of Rs 1,100 crore (Rs 11 billion), against RBI’s mandate of a minimum of Rs 500 crore (Rs 5 billion) as capital for new banks. 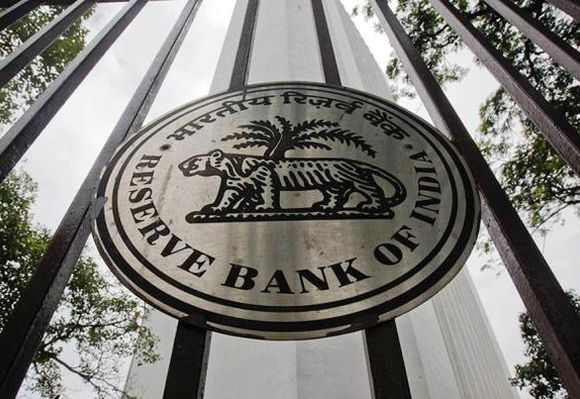 “Bandhan’s presence in the eastern markets has certainly helped.

“But it also has a strong balance sheet and has been doing community banking efficiently for more than a decade.

“The company is well managed and there has been no instance of governance-related issues.

While Deloitte advised Bandhan in its preparation to apply for a banking licence, the presence of senior bankers on its board also helped. Bandhan has V K Chopra (former chairman & managing director of Corporation Bank), S K Chakrabarti (former deputy managing director of Axis Bank) and Ranodeb Roy (former managing director & head of fixed income for Asia Pacific at Morgan Stanley) among its board members.