The Microsoft founder has offered $110 million for introducing five-in-one vaccine in Kerala and Tamil Nadu, according to a Times of India report. Bill Gates favours introducing the pentavalent vaccine across five states.

The foundation has invested more than $1.2 billion in projects aimed at improving public health and development outcomes in India, since 2003. 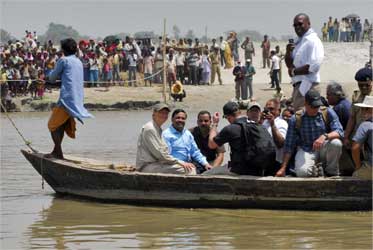 Image: Gates (front 2nd L) sits in a boat as he crosses river Kosi in Bihar.
Photographs: Reuters.
"We will explore ways to build on achievements in health and development and tackle the significant burden of disease that still exists," Bill Gates said.

Lamenting on the tardy progress in the healthcare sector, Gates said, "We are proud to partner with India because its innovative approaches are saving and improving lives every day. Yet, despite remarkable achievements, India endures some of the greatest health and development burdens in the world. 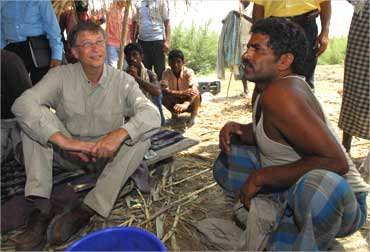 Image: Bill Gates interacts with a villager in Aulali village, Bihar.
Photographs: Reuters.
Gates will meet community health workers and state officials in Bihar to assess the progress of its initiatives in the state. Gates will check the progress of the five-year, $80-million grant made in partnership with the state government. Bihar's maternal mortality rate and other related indicators are among the highest in India.

Gates also will visit The Cereal Systems Initiative for South Asia (CSISA), which aims to help millions of Indian farmers substantially boost crop yields and their incomes within 10 years. 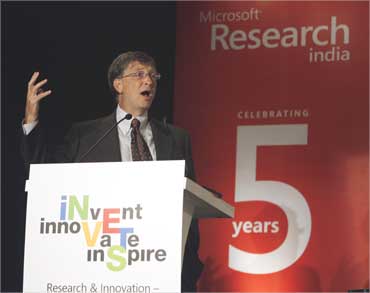 Image: File picture of Bill Gates speaking at a symposium on Research and Innovation.
Photographs: Fayaz Kabli/Reuters.
India's success in reducing polio cases by 95 per cent, from 741 in 2009 to only 42 last year, is just one example of its commitment to improve the lives of the poorest.

"I believe there is an excellent chance India will be polio free very soon," said Bill Gates.

Concern remains about the outbreak in West Bengal that has persisted for more than 12 months.

"If there is polio anywhere, we are at risk of polio everywhere," Gates said. "We encourage India to continue fully funding its own polio program to stop transmission once and for all." 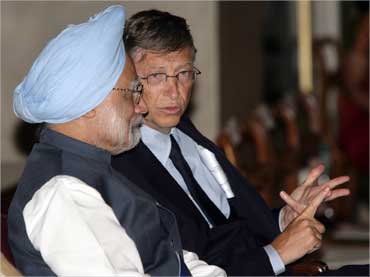 Image: File picture of Bill Gates (R) speaking with Prime Minister Manmohan Singh.
Photographs: B Mathur/Reuters.
"India has done a great job prioritising maternal and child health through the National Rural Health Mission, and we hope our partnership with the government of Bihar will help to accelerate progress," said Gates.

Another priority will be to urge the government of India to intensify progress on vaccinating its children. Last year, Gates had called on the global community to help make this the Decade of Vaccines.