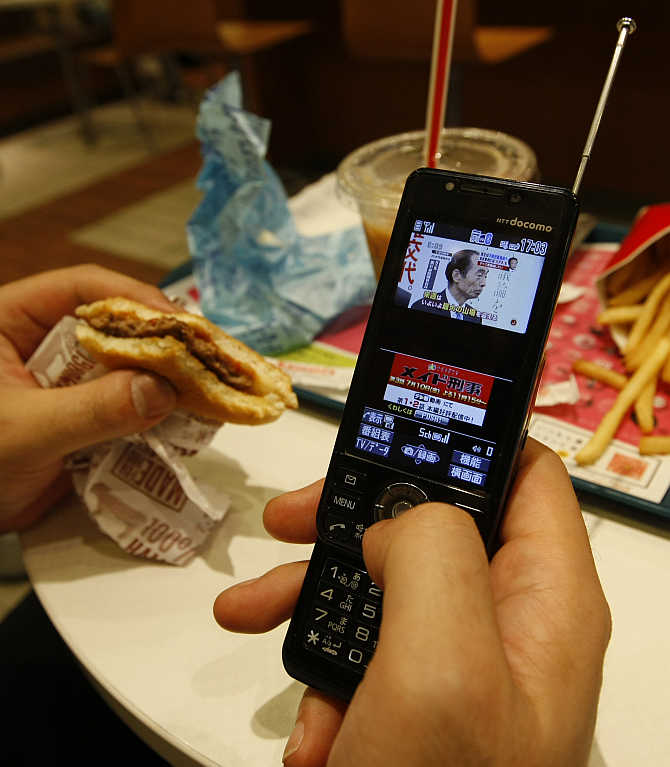 Image: A man watches television through his mobile phone at a fast food restaurant in Tokyo, Japan.
Photographs: Kim Kyung-Hoon/Reuters

Vendors in India shipped 9.3 million smartphones in the second quarter of 2013 against 3.5 million in the same period of 2012. With the number of smartphone users in India rising fast, viewing videos on these handsets is beginning to gain traction.

According to the International Data Corp’s AP Quarterly Mobile Phone Tracker, vendors in India shipped a total of 9.3 million smartphones in the second quarter of 2013, compared with 3.5 million units in the corresponding period of 2012.

Mobile TV is becoming an app-driven industry, with Mobile TV apps having seven times more exposure than mobile TC+V Websites. This trend is evident with all major channels launching apps for some of their popular programmes. 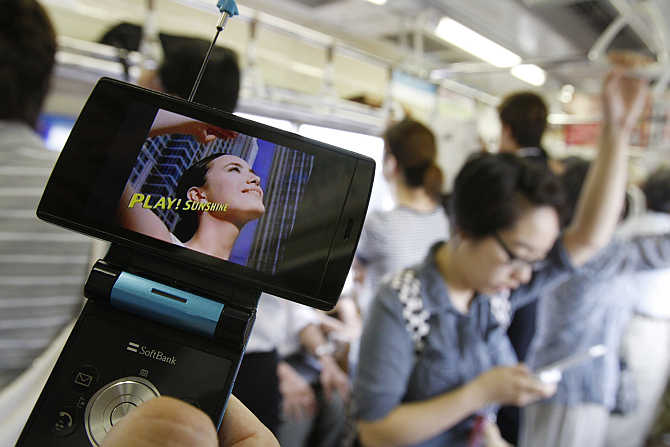 Image: A man watches television on his mobile phone while commuting on a train in Tokyo, Japan.
Photographs: Yuriko Nakao/Reuters

Take, for instance, the Big Boss app created by Colors for the last season. The last show, Big Boss Season 6 app was downloaded at least half-a-million-times. The channel is expecting that Big Boss Season 7 app to be downloaded by at least one million times in 30-45 days of the launch. This is when Colors’ entire digital space entry is just 18-24 months old.

“The two trends that we have seen is that viewers on the mobile handsets prefer short-form content and they are watching videos to catch up on a lost episode. Our experience with ‘Comedy Nights with Kapil’ has been amazing. The app was downloaded 100,000 times in just the first week of the launch of the show,” said Vivek Srivastava, commercial and digital head, Colors.

Colors that had created apps just for the Apple and Android-based phones is also now getting on to other platforms to cater to maximum market base. 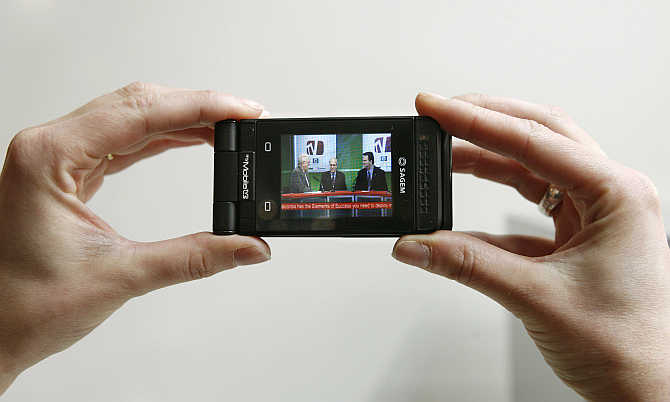 Image: A mobile 'myMobileTV' by Sagem is displayed during the Mobile World Congress in Barcelona, Spain.
Photographs: Albert Gea/Reuters

At Sony India, the channel has gone a step ahead and created a paid app for Kaun Banega Carorepati. Nitesh Kripalani, executive vice-president - new media, business development and digital/syndication at Sony Entertainment Network, said the uptake of mobile TV app was happening because the eco-system is coming into play.

“Our foray into digital TV was almost three years back. Since then, three things have happened - handset costs have come down, internet costs are falling and finally telecom players are pushing for data consumption as revenue from VAS (value-added services) starts to trickle,” he added.

Sensing this rise in user base for content, Sony created a different branch for video-on-demand called Sony Liv. Since the launch, end of January 2013, the company has seen five million app downloads of Sony Liv. According to Kripalani, they have registered 18 million page views a month, have two million unique visitors for the current month and seen 5-6 million video views. 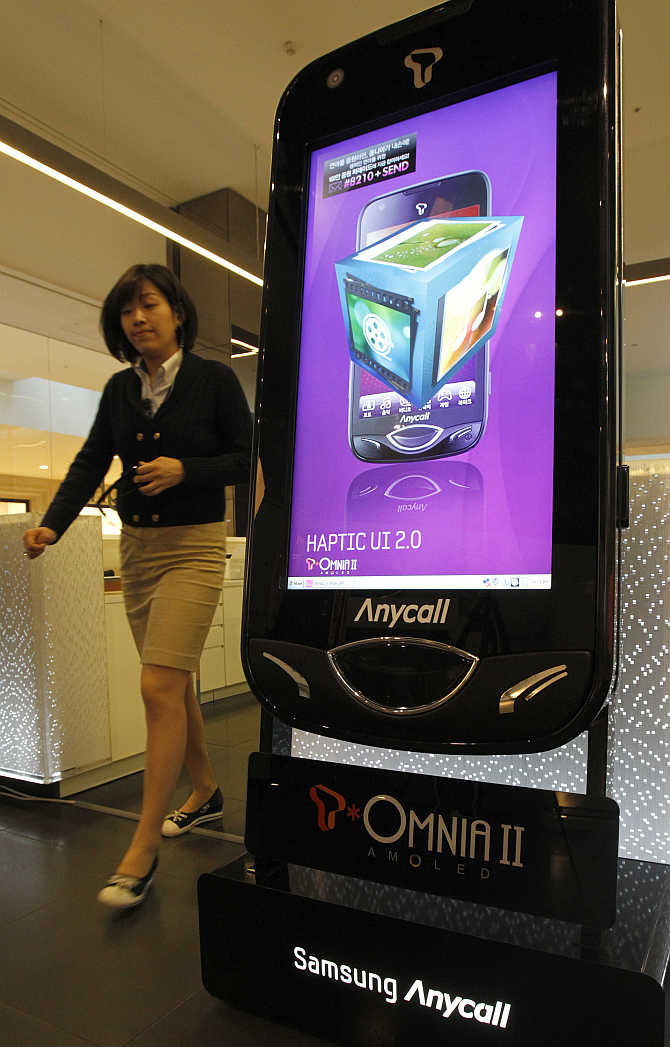 Image: An employee of Samsung Electronics walks past a large-scale replica of one of its mobile phones displayed for visitors at the company's headquarters in Seoul, South Korea.
Photographs: Jo Yong-Hak/Reuters

“What makes this story real is the time spent on an average. According to our data viewers using tablet spent 15-17 minutes, and a mobile handset user spends anywhere between five to seven minutes on a video. And more importantly, 50 per cent of the traffic is going up to the end of the video,” said Kripalani.

This in turn has meant that for advertisers, too, this is a real opportunity. Compared to the internet consumption pattern on the desktop, the advantages for advertisers remain the same. This includes, tracking what a user is watching, what is the duration and providing target advertisements. The Nielson study also says smartphone owners in Asia-Pacific markets are relatively receptive to mobile advertising. Almost 87 per cent of smartphone users in India clicked on advertisement in the monthly data for August 2013.

According to Shivam Srivastava, director, business development, APAC, Vdopia for advertisers mobile TV platform is gaining traction. “We did live streaming of IPL (Indian Premier League) match on mobile TV. We had brands approaching us who wanted to be part of the IPL fever but could not afford to due to entry being expensive. Though you cannot ignore TV, which is really huge, what advertisers like about mobile user is that they can reach out with a targeted advertisement and frequency too,” he added.

Players such as NexGTv have found a dedicated audience to cater to. NexGtv, a product from DigiVive and was launched in 2010, claims to cater to about 14 million subscribers across India. According to Nielsen Informate report of December 2012, seven out of 10 mobile TV users use NexGTv.