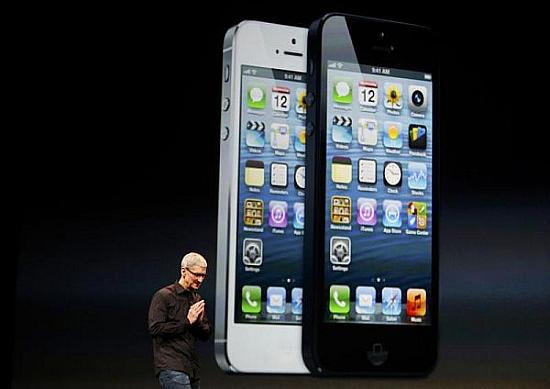 As BlackBerry launches the first smartphone from its make-or-break BB10 line in India, one of its most loyal markets, the company faces new competition from a formidable rival that has long had a minimal presence in the country.

"Now your dream phone" at Rs 5,056, read a recent full front-page ad for an iPhone 5 in the Times of India, referring to the initial payment on a phone priced at $840, or almost two months' wages for an entry-level software engineer.

The new-found interest in India suggests a subtle strategy shift for Apple, which has moved tentatively in emerging markets and has allowed rivals such as Samsung and BlackBerry to dominate with more affordable smartphones. With the exception of China, all of its Apple stores are in advanced economies.

Apple expanded its India sales effort in the latter half of 2012 by adding two distributors. Previously it sold iPhones only through a few carriers and stores it calls premium resellers. 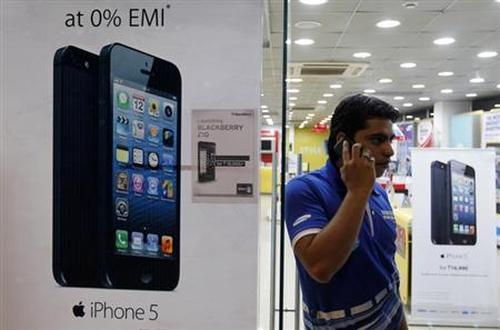 Image: A man speaks on his mobile phone while standing next to posters advertising an Apple iPhone 5 and Blackberry Z10 in Ahmedabad.
Photographs: Amit Dave/Reuters

The result: iPhone shipments to India between October and December nearly tripled to 250,000 units from 90,000 in the previous quarter, according to an estimate by Jessica Kwee, a Singapore-based analyst at consultancy Canalys.

At The MobileStore, an Indian chain owned by the Essar conglomerate, which says it sells 15 percent of the iPhones in the country, iPhone sales tripled between December and January, thanks to a monthly payment scheme launched last month.

"Most people in India can't afford a dollar-priced phone when the salaries in India are rupee salaries. But the desire is the same," said Himanshu Chakrawarti, its chief executive.

Apple, the distributors, retailers and banks share the advertising and interest cost of the marketing push, according to Chakrawarti. Carriers like Bharti Airtel Ltd, which also sell the iPhone 5, run separate ads.

India is the world's No. 2 cellphone market by users, but most Indians cannot afford fancy handsets. Smartphones account for just a tenth of total phone sales.

In India, 95 percent of cellphone users have prepaid accounts without a fixed contract. Unlike in the United States, carriers do not subsidise handsets. 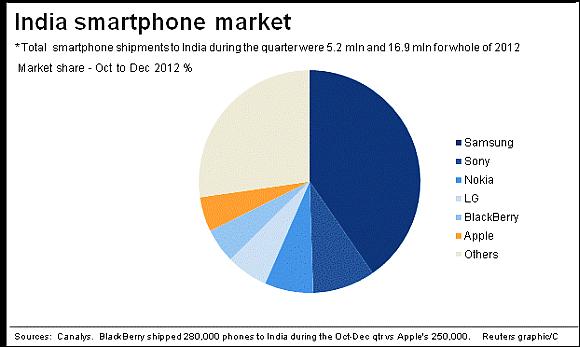 Within the smartphone segment, Apple's Indian market share last quarter was just 5 percent, according to Canalys, meaning its overall penetration is tiny.

Still, industry research firm IDC expects the Indian smartphone market to grow more than five times from about 19 million units last year to 108 million in 2016, which presents a big opportunity.

Samsung Electronics Co Ltd dominates Indian smartphone sales with a 40 percent share, thanks to its wide portfolio of Android devices priced as low as $110.

The market has also been flooded by cheaper Android phones from local brands such as Micromax and Lava.

Most smartphones sold in India are much cheaper than the iPhone, said Gartner analyst Anshul Gupta.

"Where the masses are - there, Apple still has a gap."

Apple helped create the smartphone industry with the iPhone in 2007. But last year Apple lost its lead globally to Samsung whose smartphones, which run on Google Inc's free Android software, are especially attractive in Asia.

Many in Silicon Valley and Wall Street believe the surest way to penetrate lower-income Asian markets would be with a cheaper iPhone, as has been widely reported but never confirmed. 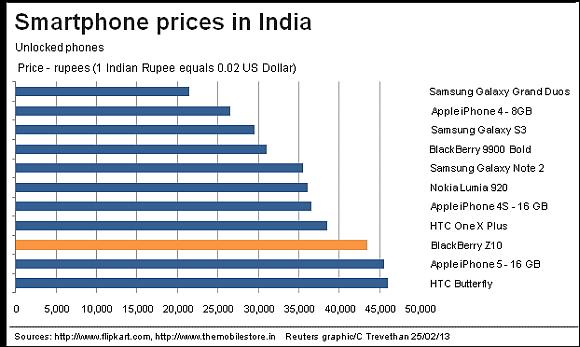 The risk is that a cheap iPhone would cannibalise demand for the premium version and eat into Apple's peerless margins.

Apple's main focus for expansion in Asia has been Greater China, including Taiwan and Hong Kong, where revenue grew 60 percent last quarter to $7.3 billion.

Asked last year why Apple had not been as successful in India, Chief Executive Tim Cook said its business in India was growing but the group remained more focused on other markets.

"I love India, but I believe that Apple has some higher potential in the intermediate term in some other countries," Cook said. "The multi-layer distribution there really adds to the cost of getting products to market," he said at the time.

Apple, which has partly addressed that by adding distributors, did not respond to an email seeking comment. 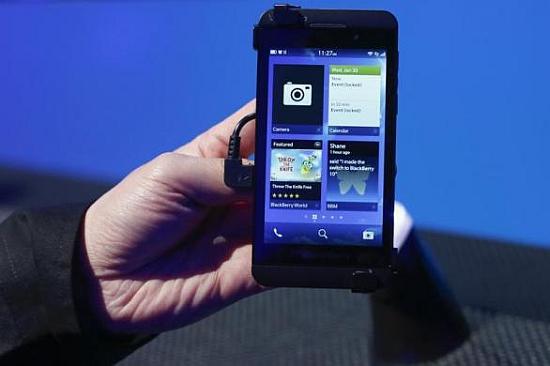 Executives at Redington (India) Ltd, the other distributor, could not immediately be reached.

BlackBerry, which has seen its global market share shrivel to 3.4 percent from 20 percent over the past three years, is making what is seen as a last-ditch effort to save itself with the BB10 series.

BlackBerry will target corporate users and consumers in India for the Z10, said Sunil Dutt, India managing director, adding that it will tie-up with banks for instalment plans.

Until last year, BlackBerry was the No. 3 smartphone brand in India with market share of more than 10 percent, thanks to a push into the consumer segment with lower-priced phones. Last quarter its share fell to about 5 percent, putting it in fifth place, according to Canalys. Apple was sixth.