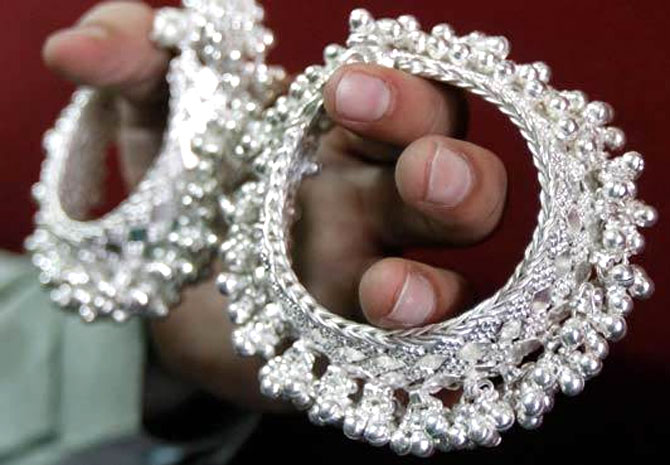 Indian silver imports are on pace to hit a record high this year as the wedding and festival season drives up buying of the precious metal instead of the traditional gold, made scarcer and dearer by official measures aimed at cutting the trade gap.

Higher silver demand in the world's biggest buyer may help support prices, which have fallen almost 30 per cent this year on the international market and are on track for their biggest annual drop in almost three decades.

The increase in buying is unlikely to spark a fresh policy response from authorities, as in the case of gold, since the value of silver that is imported is far lower than that of gold and therefore not critical to the trade balance.

"There has been a massive improvement in silver imports and we will continue to see more. Investors are taking advantage of lower prices and the lack of restrictions on silver imports as of now," said Harmesh Arora, director with the Bombay Bullion Association.

According to the GFMS metals consultancy, India imported 4,073 tonnes of silver from January to August, more than double the 1,921 tonnes in the whole of 2012, when a jump in prices in the peak season hurt demand. The record high was 5,048 tonnes in 2008.

India, also the world's biggest buyer of gold, has raised the import duty on bullion three times this year, taking it to 10 percent, and in July the government told importers that a fifth of their purchases would have to be turned around for export, leaving only 80 percent for domestic use. 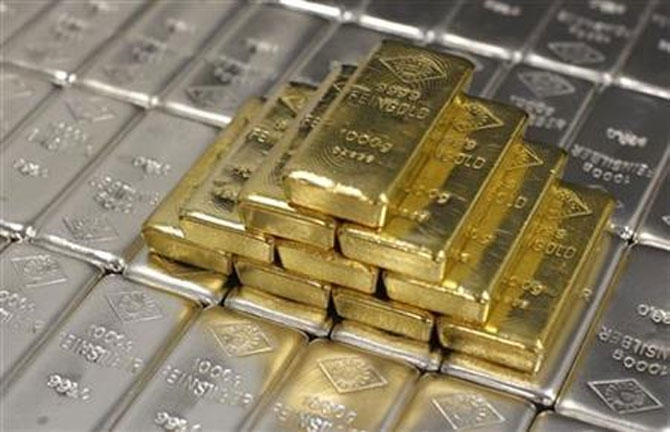 The import duty on silver was also raised to 10 percent in August from 6 percent, but prices remain far apart: gold is about 60 times more expensive than silver in dollar terms.

Gold has a special place in Indian culture, bought as a hedge against inflation and traditionally used for gifts at weddings and festivals. Silver does not enjoy the same status.

Even record shipments of silver are therefore unlikely to put any strain on the trade deficit, in contrast to the impact of gold, which is India's second-biggest import item after oil.

India imported 393.68 tonnes of gold from April to Sept. 25, slightly higher than the average 60 tonnes per month. But government restrictions have led to a sharp slowdown, with imports in August and September at just 10.5 tonnes. 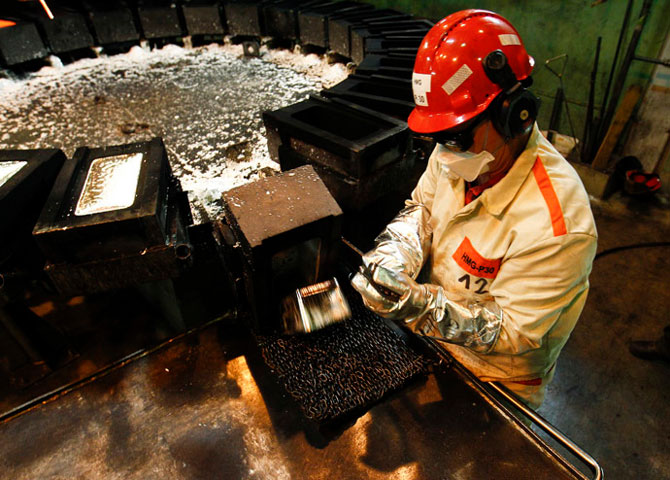 Image: A worker removes a freshly made bar of silver from a mould.
Photographs: Peter Andrews/Reuters

Silver prices have halved from their peak above $49 per ounce struck on April 28, 2011, while gold has shed 29 percent over the same period.

"Going forward, the recovery will be sharper in silver compared to gold," said Gnanasekar Thiagrajan, director with Commtrendz Research, noting that silver would be in demand as an industrial metal, too.

For now, much of the silver flooding in is finding its way to rural areas, where industry officials expect a surge in disposable incomes after a bountiful monsoon boosted agricultural harvests.

"There is less gold available, so rural people will gradually move to silver. It will be a more of a default option than a conscious choice," said Rajesh Khosla, managing director with refiner MMTC PAMP.

"I don't think we will see any policy changes in silver as the impact is so small that they don't bother to look at anything like that," Khosla added, ruling out the kind of restrictions placed on gold imports.

And the competition from platinum will be muted, since local prices are quite similar to gold, and far higher than silver. Gold and platinum fetch about 29,000 rupees per 10 grammes while silver costs 500 rupees.

Imports of platinum in the first half of 2013 rose only 10 percent from a year before to 2.1 tonnes, according to the Platinum Guild International, a trade body, and the industry is not anticipating any jump because of the gold restrictions.

"Our sales are stable so far ... There could be a small rise in sales from here," said Gautam Choksi, vice-president for finance with Hindustan Platinum, a supplier of alloy to jewellers.