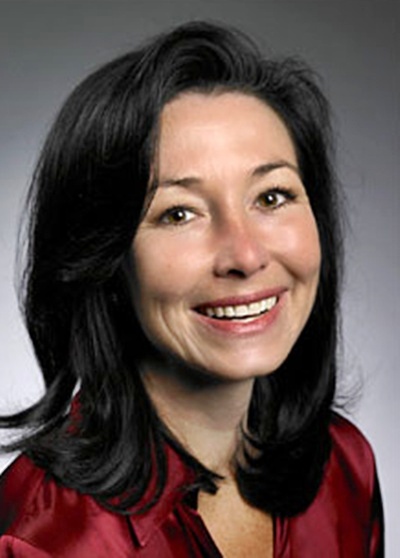 In the male-dominated corporate world, these brilliant women have proved their mettle and made a big difference.

Today, women are credited and recognised for the success and profitability of many companies.

According to Bloomberg, these women executive officers of S&P 500 companies have bagged the highest compensation for the latest fiscal year.

Take a look at the women CEOs with highest salaries…

One of the world's most influential women in the technology space, Safra A Catz has been President of Oracle Corporation since January 2004, and Chief Financial Officer as of April 2011.

In May 2008, Catz was also appointed to a three-year term as member of the Board of Directors for HSBC Holdings plc.

In 2009, she was ranked as the 12th most powerful woman in business by Fortune.

She was also ranked by Forbes as the 16th most powerful business woman in the same year. 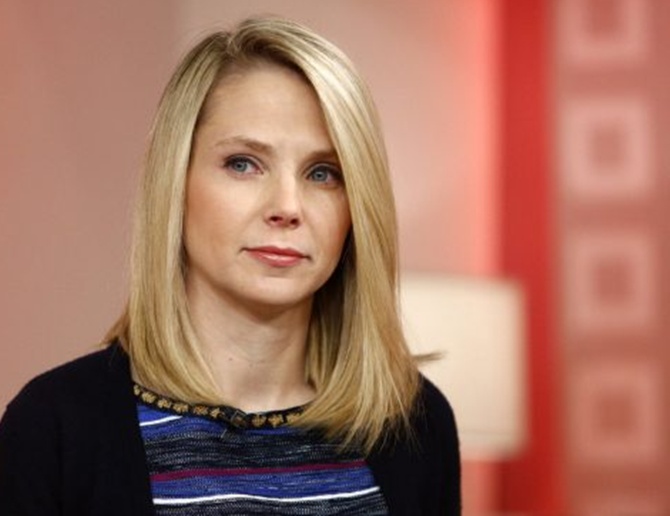 Under her leadership, Yahoo acquired Tumblr in a $1.1 billion acquisition.

Prior to joining Yahoo, Mayer took various roles of an engineer, designer, product manager, and an executive during her 13-year stint at Google. Mayer who joined Google in 1999, was the company's first woman engineer.

Mayer was ranked number 14 on the list of America's most powerful businesswomen of 2012 by Fortune magazine.

She bagged the 32nd rank in Forbes Magazine's List of The World's 100 Most Powerful Women in 2013. 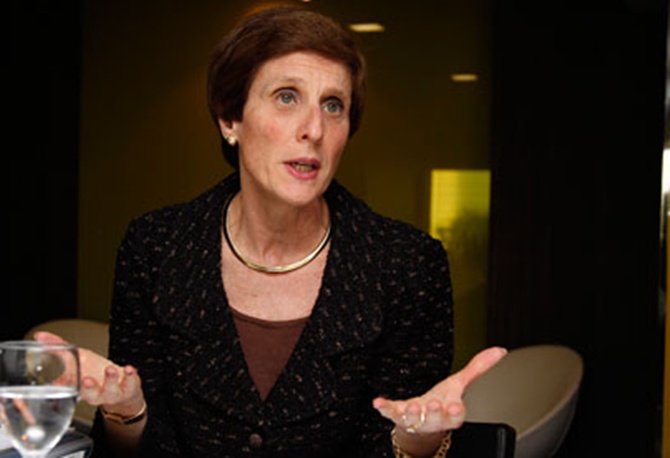 Irene Rosenfeld has changed the “face, footprint and prospects of Kraft Foods,” says the company.

Irene returned to Kraft Foods, the predecessor to Mondelez International, Inc., in June 2006 as CEO. She became Chairman in March 2007, following Kraft’s spin off from Altria Group.

She is credited for transforming the portfolio and strengthening the company's presence in fast-growing developing markets. 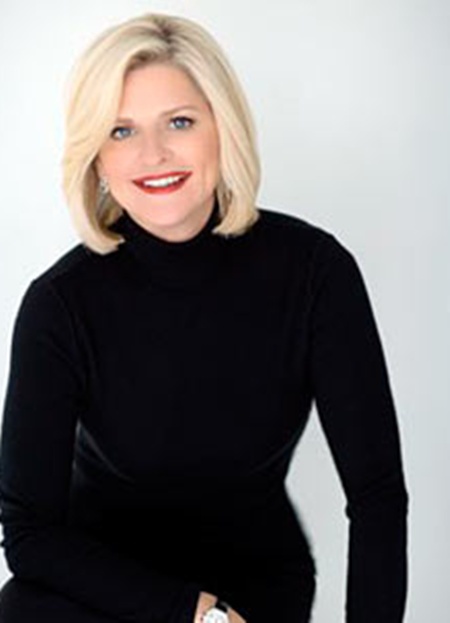 She received the Fashion Medal of Honor for Fashion Retailing in 1997. 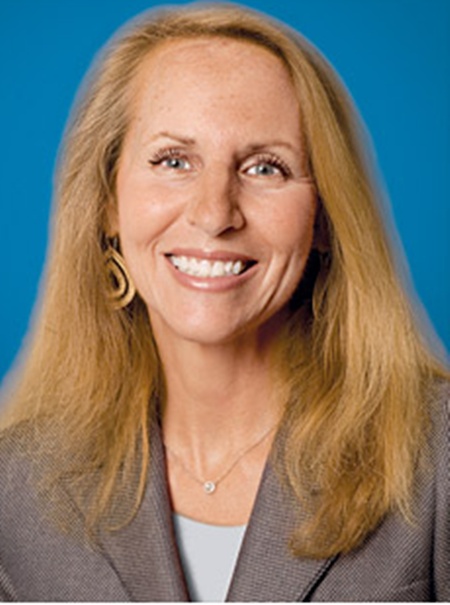 Carol Meyrowitz has been Chief Executive Officer of TJX since January 2007.

Meyrowitz is also a director of Staples, Inc. 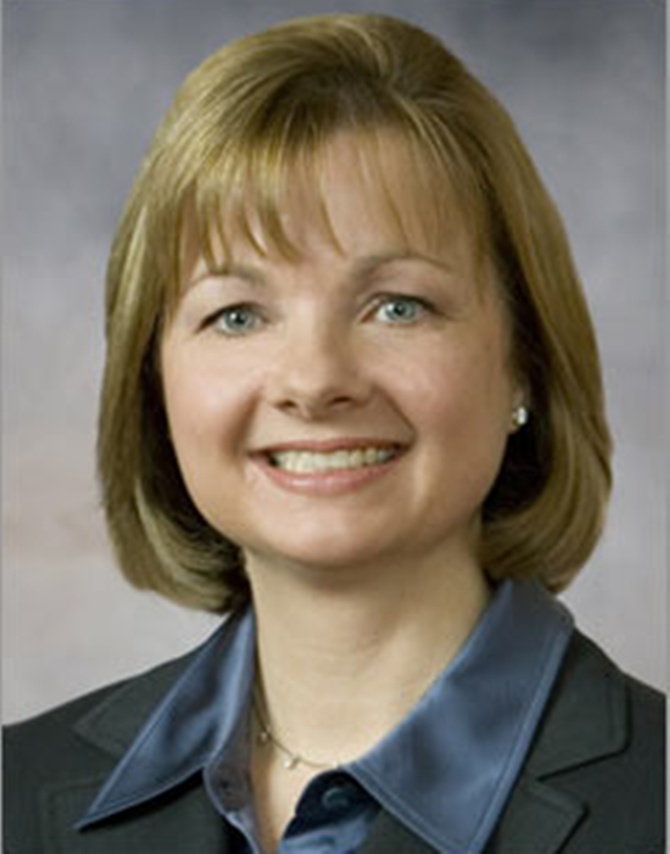 Angela Braly was president and chief executive officer for WellPoint, Inc., a US-based health care company. Five years after she assumed the role of the company’s CEO, she resigned on August 28, 2012 due to shareholder criticism on the company's bad performance. 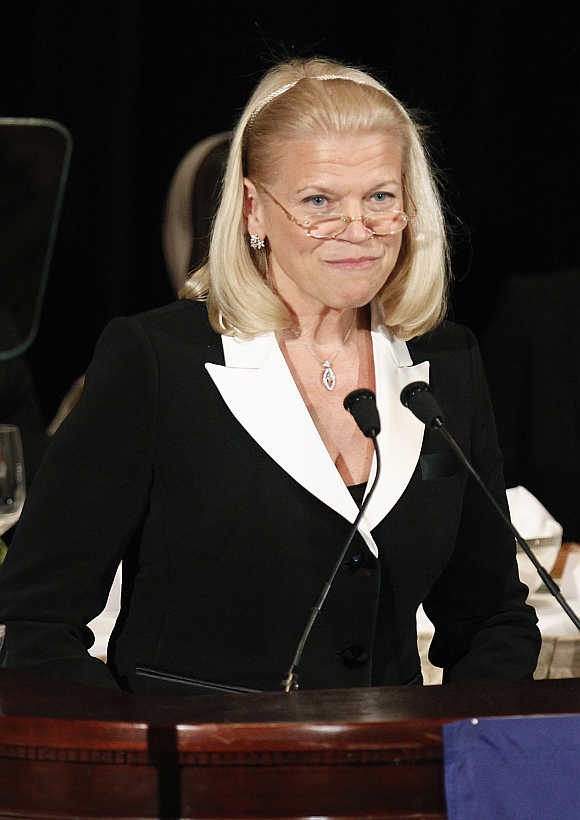 Image: IBM CEO and Chairperson of the Board Virginia Rometty in New York.
Photographs: Reuters

Virginia Rometty is the first woman to head IBM. She began her career with IBM in 1981 in Detroit, Michigan.

Prior to becoming president and CEO in January 2012, she was senior vice president and group executive for sales, marketing, and strategy at IBM. 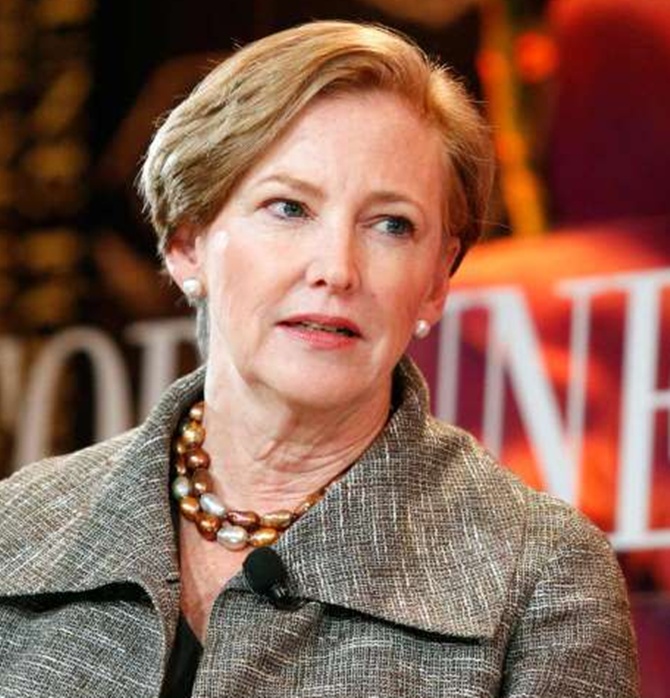 Ellen Kullman is the 19th executive to lead the company in more than 208 years of DuPont history.

Ellen became CEO on January 1, 2009. Prior to that, she served as executive vice president. As CEO, Ellen has championed market-driven science to drive innovation across the company’s businesses.

Under her leadership, decision making has moved closer to customers around the world, resulting in greater partnering, collaboration, and solutions attuned to local needs.

Ellen began her career at DuPont in 1988 as a marketing manager. Forbes ranked her 4th of the 100 Most Powerful Women in 2011. 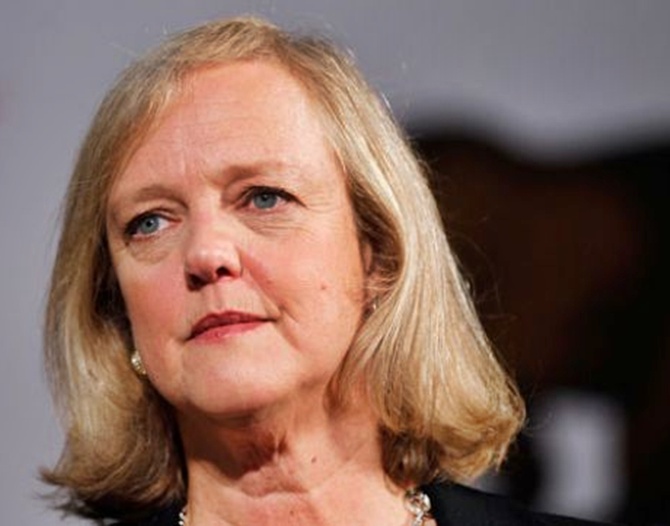 Meg Whitman has served as HP's president and chief executive officer since September 2011. She has also served as a member of the Board of Directors of HP since January 2011.

Prior to this, Whitman served as President and Chief Executive Officer of eBay Inc., from 1998 to March 2008.

She was named among the top five most powerful women by Fortune magazine. Harvard Business Review named her the eighth-best-performing CEO of the past decade. 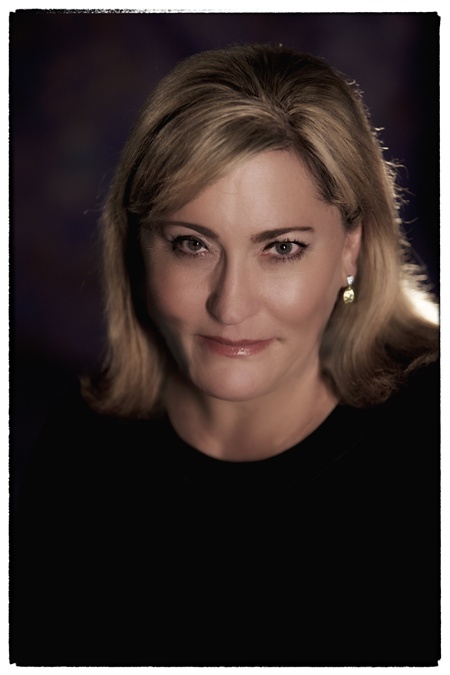 Under Renee James’s leadership, company saw its expansion into providing proprietary and open source software and services for applications in security, cloud-based computing, and importantly, smartphones.

James who joined Intel in 1987 is responsible for Intel's global software and services strategy, revenue, profit, and product R&D.

James also serves as a non-executive director on the Vodafone Group Plc Board of Directors and is a member of the Remuneration Committee.

She is an independent director on the VMware Inc. Board of Directors and is a member of the Audit Committee. 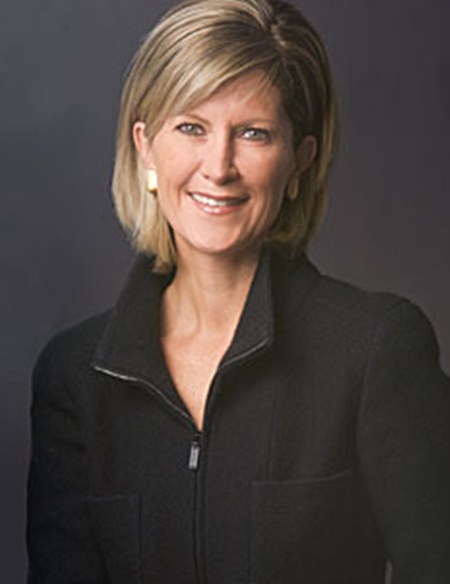 In March 2005, she was appointed CEO of J.P. Morgan Private Bank.

In 2012,  she was included in the ‘50 Most Influential list’ of Bloomberg Markets Magazine.

She is currently ranked the 24th most powerful woman according to Forbes. 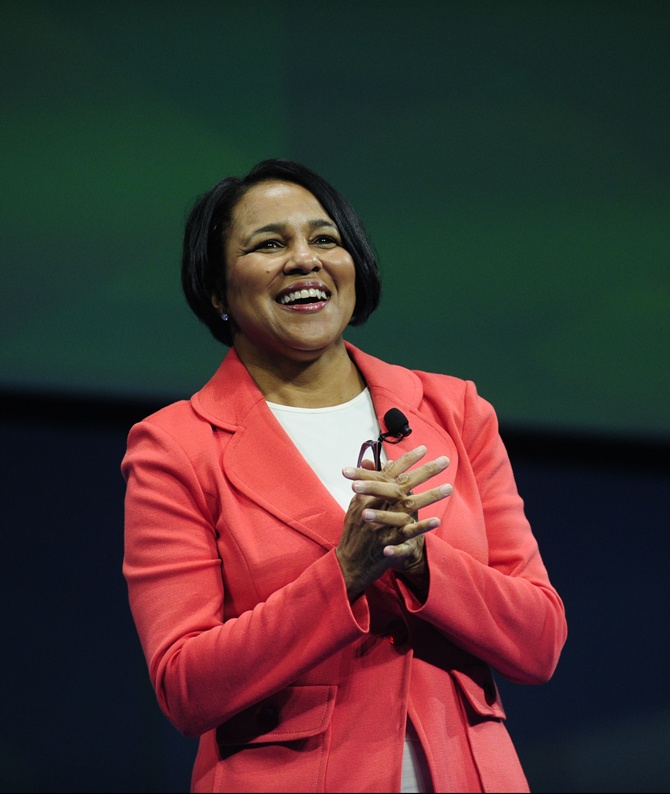 Rosalind Brewer started her career with Walmart in 2006 as vice president of operations in Georgia.

In January 2012, Rosalind Brewer was appointed president and chief of Sam's Club, making history as the first woman and first African American ever to become CEO of a Wal-Mart business unit, according to Forbes. 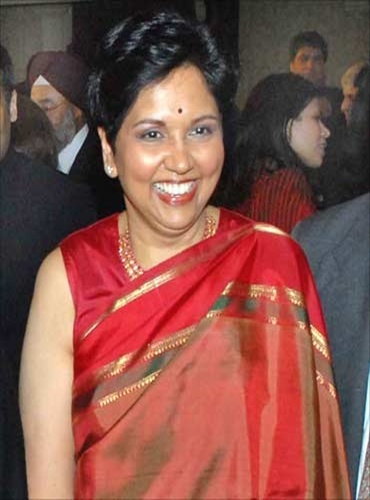 Chairman and CEO of PepsiCo

PepsiCo's Indian-origin CEO Indra Nooyi joined the company in 1994 and was named president and CFO in 2001. In 2007 she became the fifth CEO in PepsiCo's 44-year history.

Nooyi has directed the company's global strategy for more than a decade.

She took the lead in the acquisition of Tropicana in 1998, and merger with Quaker Oats Company, which also brought Gatorade to PepsiCo.

Nooyi is consistently ranked among World's 100 Most Powerful Women by Forbes magazine. 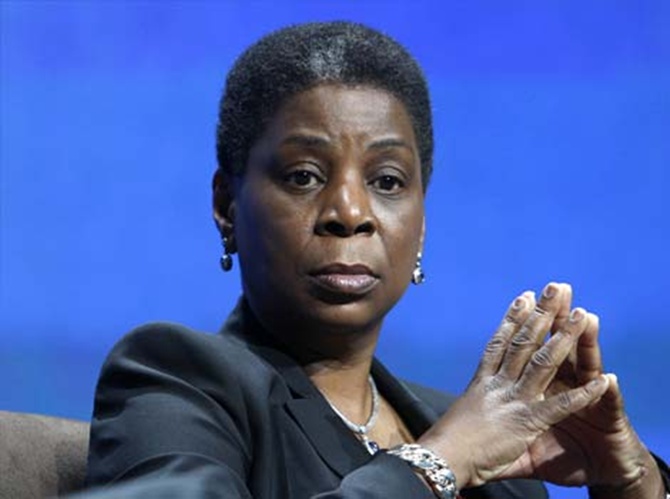 Ursula Burns is the first African-American woman CEO to head a Fortune 500 company.

Burns joined Xerox in 1980 as a mechanical engineering summer intern.

After 29 years, she rose through the ranks to become the chief executive officer in July 2009.

In 2009, Forbes rated her as 14th most powerful woman in the world. 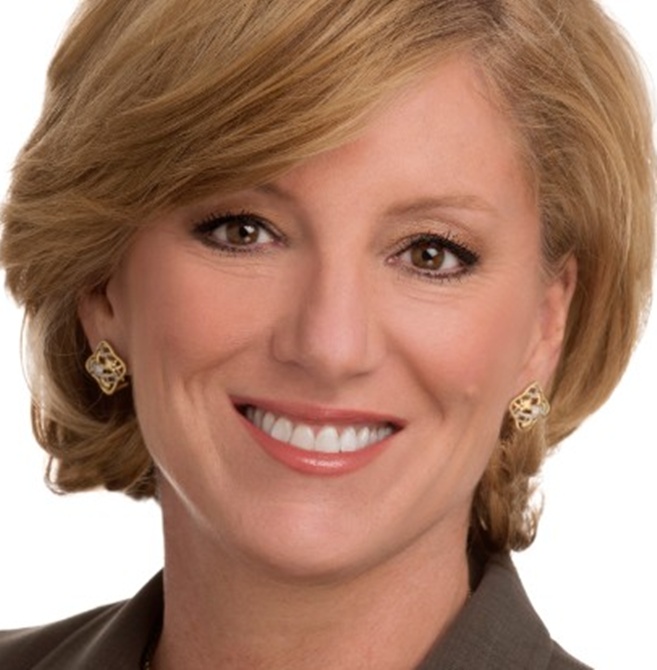 Sheri McCoy, CEO of Avon Products and former Vice Chairman and member of the Office of the Chairman of Johnson & Johnson, holds five patents registered in the United States and Europe.

She was named by Fortune Magazine among the ‘50 Most Powerful Women in Business’.

In August 2012, she was recognised as the 39th most powerful woman in the world by Forbes Magazine.