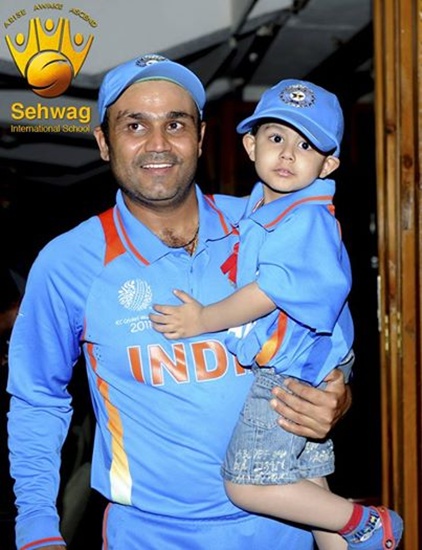 With a sleek new school in Haryana, Virender Sehwag dons the role of an education entrepreneur.

It's a bumpy ride through Haryana's hinterland to Silani Kesho on the main Jhajjar road.

Thankfully, potholes give way to silky smooth roads as soon as one reaches Sultanpur bird sanctuary, around 15 kilometres from Gurgaon, and thereafter the journey is a breeze.

The wheat crop has just been harvested and the fields are a profusion of hazels and browns, having just had the golden crowns sheared off. As you are taking in the rustic scene the Sehwag International School suddenly swims into sight out of nowhere.

The school would have been more at home alongside Gurgaon's sleek structures rather than in the rural heartland of Haryana. And yet here it is, standing as a mark of Virender Sehwag's new innings as an education businessman. In the past two months, a barrage of advertisements and pamphlets in leading papers, and banner ads on the web, sporting a picture of the smiling former India cricketer, have been shouting loudly about the new school.

Knowing Sehwag as a rough-and-ready man for whom even graduation from Jamia Millia Islamia became a feted event, one wonders whether the 35-year-old cricketer has merely lent his name to the institution or if he has really set out to become pedagogue.

"Earlier there was a lot of speculation that I had only endorsed the school and given it my name. It is to clear this notion that I have been giving interviews in the media and putting out ads. The school is my baby, I have nurtured it," says Sehwag in a phone conversation. 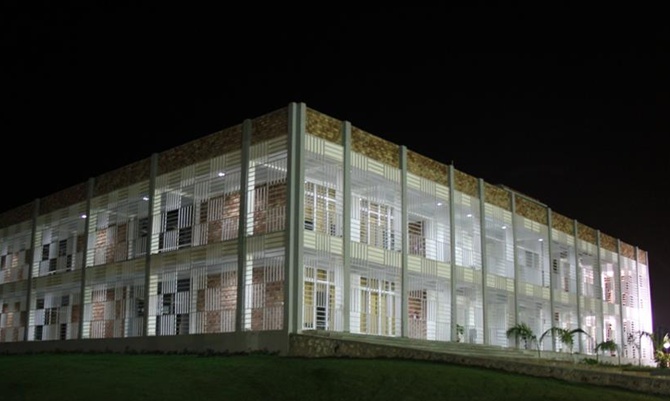 He is travelling to Kuwait and Dubai to promote the school there. Another team is already in Nepal and Bhutan to attract NRIs and other international students who wish to study in India.

"I can assure them that they won't miss home, as this will be a home away from home for them," he says.

Many cricketers after retirement set up academies to nurture young sportsmen. Arun Lal started a cricket school in Kolkata in 1979, as did Madal Lal in 1998 in Delhi's Siri Fort Complex. 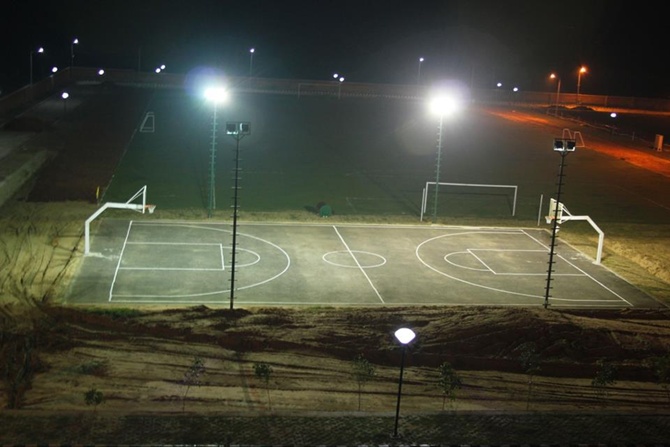 Then there was the academy established by the Tamil Nadu opening batsman V B Chandrasekhar in Chennai in 1997.

Recent stars like Rahul Dravid, Sourav Ganguly and Ashish Nehra too have lent their wisdom at camps started by various academies. One would have expected Sehwag, the aggressive and unorthodox right-hand opener, to limit himself to activities around the game as well.

Without being uncharitable, cricket, after all, was the only thing the bludgeon wielder was best at. Well, he does have four cricket academies - in Jhajjar, Greater Noida, Lajpat Nagar in Delhi and Ambala. 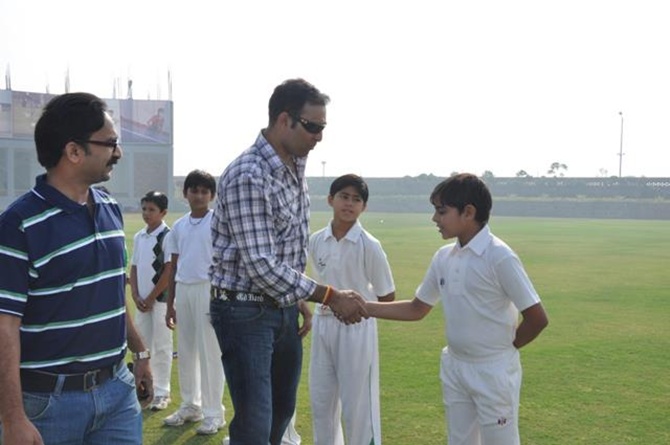 Not that he thinks he has left his field days behind. He has been bought by Kings XI Punjab, the Indian Premier League franchise, for this year's tournament for Rs 3.2 crore, good money for someone who hasn't scored a fifty now for several matches in domestic cricket.

Many think his international career is over, though he has claimed in recent interviews that he still has two-three years of competitive cricket left in him.

But none of this clouds his vision for the school - a dream that his father cherished since his son's school days, when Sehwag was finding that passing exams wasn't as easy as hocking the ball over rooftops. 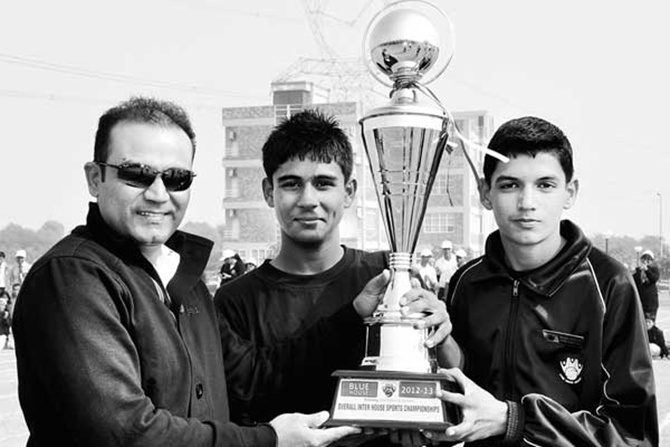 "When I was young, I used to travel from Najafgarh to Ferozshah Kotla or to Jamia, spending five to six hours every day. It was then that my father told me when I become successful, I should start an institution which would be open to students from all states and all countries," says Sehwag.

"He asked me to create such a school that no kid would have to travel to separate places for sports and academics."

His father's vision seemed a step closer to reality when Sehwag hit his second triple century on March 26, 2008 against South Africa at the MA Chidambaram Stadium in Chennai. 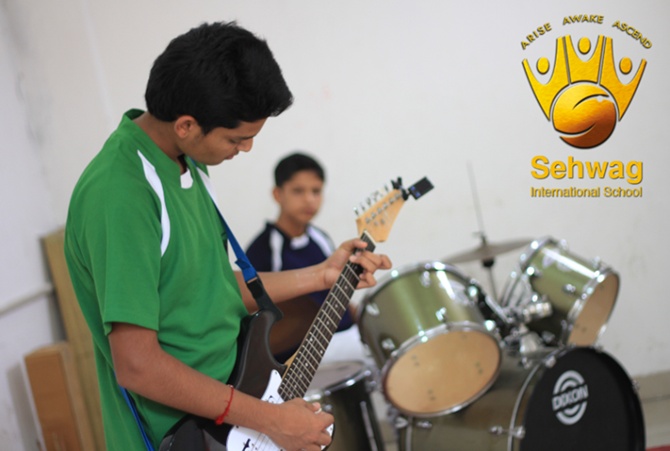 "Bhupinder Singh Hoodaji, chief minister of Haryana, announced a grant of a plot in my name in Jhajjar," says Sehwag. Three years later, in April 2011, the school was up and running. The man who had scored over 16,000 runs in Tests and one-dayers had notched up another milestone.

With a sportsperson as chairperson, the school has quality sporting facilities such as clay, synthetic and grass courts for tennis, a football field, a 400-metre track for athletics, a horse-riding facility, indoor badminton and squash courts and a swimming pool.

Spread across 23 acres, the school started with 300 students. The strength has now increased to 400, of which 80 are term boarders from India and abroad.

As of now, the school is affiliated to the Central Board for Secondary Education and is open to students from kindergarten to Class X, with the "plus-2" classes to be added in subsequent years. There are 38 teachers in all, which means a student-teacher ratio of nearly 1:10. The fee for a day boarder is around Rs 1 lakh a year, while for the term boarders it is Rs 3.10 lakh.

The piece de resistance is the cricket ground spanning 75 metres. "It is bigger than the Kotla and is approved by the Board of Control for Cricket in India, or BCCI. A lot of state-level matches take place here," says Sehwag.

The school has tied up with Sports Mentor, a specialist in sports and fitness development programmes that has worked with organisations such as BCCI, International Boxing Association- Switzerland and IMG in the past.

"Along with a report card for academics, we also give an assessment created by Sports Mentor on a child's strengths in sports," says the cricketer. The organisation has also provided 12 coaches across disciplines. 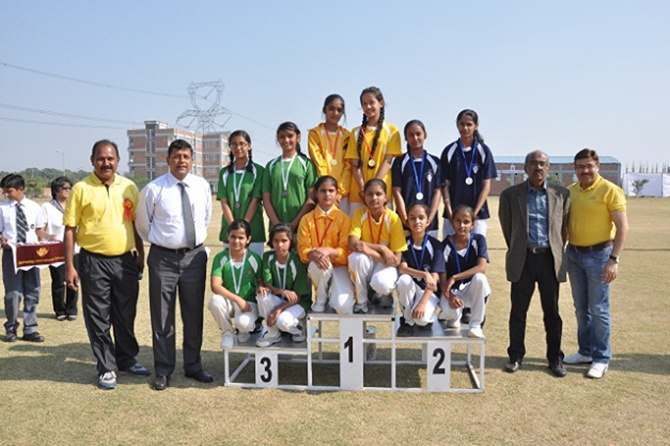 Pallavi Saikia Farwell, head (HR and PR) at the school, says she hasn't come across such sports facilities anywhere else in her 19-year-long career.

"The coaches teach you not only how to play but also to respect the game. My son is in Class VII and absolutely loves it here," she says.

Children are encouraged to take up at least three sports. A hulk of a man at the reception can't seem to understand why children need to pursue so many disciplines. He has come all the way from Mathura to check out schools for his son who is in Class VI.

Farwell and Keya Sen, head of academics, explain patiently: "Children get bored with one kind of sports. If they play 3-4 different ones in their formative years, they will know which ones to focus on in the future. Heaven forbid, if sometime later the child is unable to pursue a sport due to an injury or an accident, he has a sound academic record to fall back on." 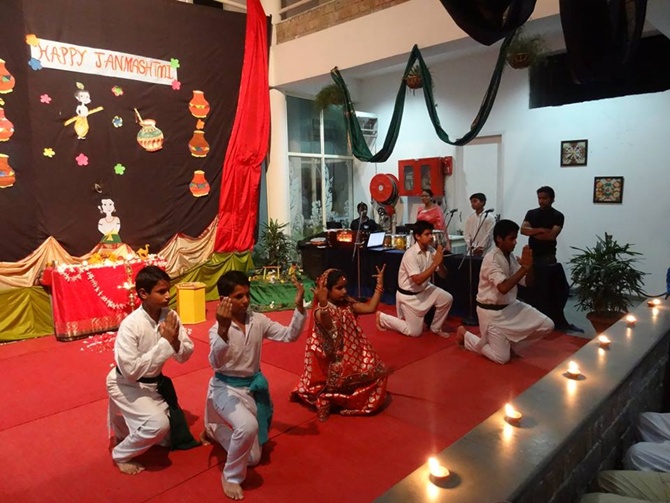 According to the EducationWorld C Fore India School Rankings of September 2013, Sehwag International School ranks at number 25 in the all-India rankings of day-cum-boarding schools and number 2 in the state of Haryana.

"The school offers rigorous and comprehensive academic programme along with physical education," states the survey.

Sehwag has tried to instill mantras from the cricket field into his educational philosophy. "I stress on the Power of 7 - self mastery, resilience, tackling obstacles, effective decision making, empathy, appreciation and optimism. Every activity in the school is centred on these. One must be a team player. It helps build your character," says the only Indian to have scored two triple centuries in Tests for India. "After a practice session, I used to find it easier to study. A chapter that would have otherwise taken me an hour-and-a-half would get done in half an hour."

While Sehwag is busy marketing his school, it is his wife Aarti who looks after the administration. "I try to visit at least once a week and chat with the students about their likes and dislikes. As a mother of two kids, I know the concerns that parents have, and I try to address them as much as I can," she says. "For Viru, there is nothing better than education as a medium to give back to society. And as Mrs Sehwag, it is my constant endeavour to help him realise his dream." So, are there any expansion plans on the anvil? Sehwag ponders over the question for a minute before answering.

"A school requires a huge investment in terms of land and capital. It takes between Rs 20 crore and Rs 30 crore to start a school. I have taken loans from the bank and put in my own money. I was lucky to get the land, because of Hooda ji. And if any other government wishes to give me land, I will be happy to start a school there. But for now, the school in Jhajjar is the focus of all my attention," he says.