Minor disagreements between Jagdish Bhagwati and Amartya Sen have amplified into a shouting match.

Jagdish Bhagwati and Amartya Sen are the two Indian economists most respected for their work.

Both have worked on a broad spectrum of issues, though Sen is best known for his work on public choice and development and Bhagwati for his work on trade. Both are liberal, neoclassical economists, who support deregulation and disapprove of existing subsidies.

Yet, minor disagreements between them have amplified into a shouting match - well, a one-way shouting match, with Bhagwati repeatedly attacking Sen in public and in print, and Sen expounding on his point through interviews and op-eds, largely without mentioning Bhagwati or his views. 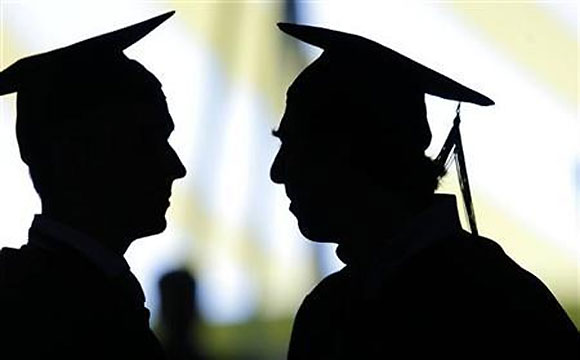 In a way, this isn’t surprising: Bhagwati has long disapproved of Sen. Also, both have competing, co-authored books in the market.

In his latest broadside against Sen, Bhagwati managed to mention his book frequently, insisting in it, he had proved how Sen was anti-growth, a point many reviewers surprisingly failed to mention.

But that doesn’t entirely explain why the dispute has really taken off. One reason, of course, is Sen has spoken about food security, released a book on Bihar and expressed a preference that Narendra Modi not become prime minister.

This immediately meant the luminous intellectuals of the internet, and those in the respectable media that followed their lead, immediately assumed he somehow represented the Congress. 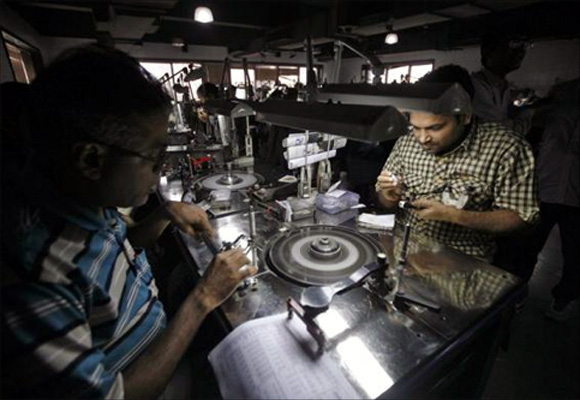 Image: Employees work inside the polishing department of a diamond processing unit at Surat, in Gujarat.
Photographs: Amit Dave/Reuters

That immediately made Bhagwati Modi’s best friend and any further difference between the two could be conveniently slotted into the pre-prepared Modi-versus-Congress mould apparently compulsory for news stories today.

If there’s anything worth taking away from what has become an increasingly unseemly and uninformative spectacle, it is the sobering realisation that academics continue to be divided over the simple mechanisms of how growth can be achieved — purely through deregulation, as Bhagwati would argue, or with a simultaneous push to education and health, as Sen wants.

Here’s the basic checklist on who said what, whether it was true, and the real differences and similarities between Sen and Bhagwati: 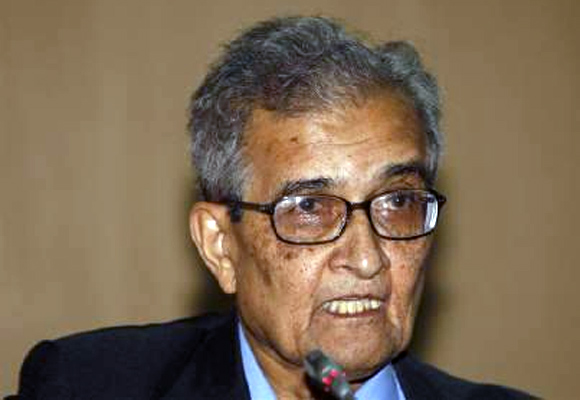 Do Bhagwati and Sen have similar stature as academics?

Sen won a Nobel Prize for his work on social choice and welfare but Bhagwati is a path-breaking trade theorist.

In fact, Bhagwati is far more an economist’s economist than Sen, who at Harvard, for example, had an office at the philosophy department, not in the economics department.

Sen is unique in that he is also one of the most respected living academic philosophers and a close associate and fellow teacher of both the left-of-centre John Rawls, the leading philosopher of the 20th century, and libertarian icon Robert Nozick. 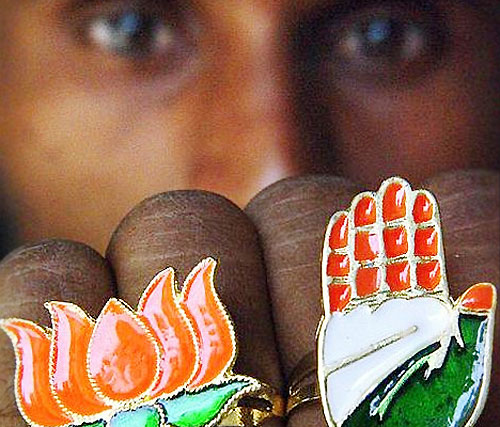 Is Sen close to the Congress and Bhagwati to the BJP?

Actually, Sen was awarded the Bharat Ratna by an NDA government in 1999, though some sections of the Bharatiya Janata Party want it taken away now because he has said he doesn’t think Narendra Modi should be PM; a belief in Modi’s spotless virtue is not known to be a necessary qualification for the award.

Bhagwati, meanwhile, has fellowships named for him at Columbia University, paid for by the Indian taxpayer - set up in 2010, at the direction of the UPA government (it is unusual for such to be named after a member of the university’s faculty).

Both Bhagwati and associate Arvind Panagariya - who holds the, yes, Jagdish Bhagwati Chair in Indian Political Economy at Columbia - have frequently talked about their long interaction and friendship with Prime Minister Manmohan Singh.

So, in a word, no! The desire to impose a politically partisan lens on an academic disagreement shows how shallow and debased is the understanding of economics in the Indian public sphere, as well as how devoid of thought-provoking content is the actual political debate between the Congress and the BJP. 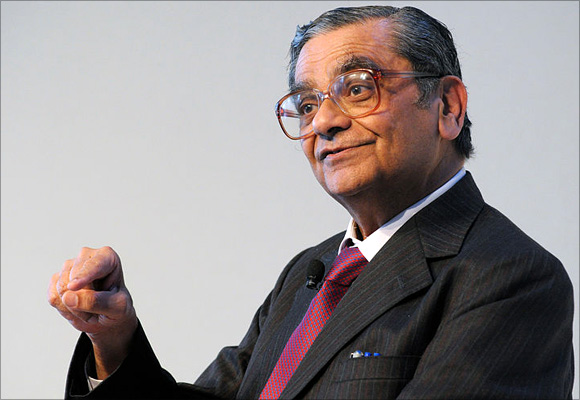 Is it really Sen versus Bhagwati?

No. It’s Bhagwati versus Sen. Sen has almost completely avoided commenting on Bhagwati’s views, although Bhagwati has become increasingly personal and petty in his attacks on Sen.

Sen broke his Bhagwati-as-Voldemort rule in a recent letter to The Economist. The liberal British magazine had run a review of Sen and Jean Dreze’s new book; the reviewer happened to mention Bhagwati in passing, without specifying that he, Bhagwati, was right and Sen was wrong.

This was a red rag to Bhagwati, who wrote Sen only paid “lip service” to growth. This was too much for Sen, who wrote, explaining he did his PhD on how to stimulate growth, and the first collection of his essays, published in 1970, was titled Economic Growth.

In fact, Sen is perhaps the greatest living scholar of the original philosopher of the free market, Adam Smith.

Sen must regret his moment of weakness, because Bhagwati then wrote an article for Mint that basically returned, even more harshly, to his complaints about Sen.

Bhagwati’s books are littered with disparaging remarks about Sen; indeed, reading between the lines of his last book reveals even more such remarks, some of these from resentments that date back to the early 60s, when both were young professional economists in New Delhi. 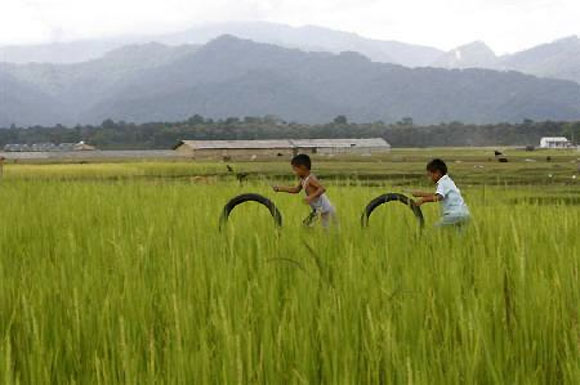 Is Sen anti-reform? Is Bhagwati anti-public funding of schools?

No, and no. Sen has often and publicly argued in favour of greater liberalisation, ending red tape, labour law reform, and cutting fuel, power and fertiliser subsidies. It may be convenient for both his friends and enemies to paint him as some kind of socialist but he isn’t.

Meanwhile, Bhagwati has also argued for a second track of reform in social sector areas, though he would prefer public money be spent on, say, school vouchers that let poor parents pay for private schools.

Has either of them soured on the India growth story and blamed the UPA?

No. Both are unfazed by the fall in India’s growth rate. Sen argues it has fallen as much as its competitors; Bhagwati has blamed tight monetary policy and the freeze-up in clearances following outrage over scams, adding many government proposals could reverse the slide.

Both of these are, pretty much, what the government also claims. 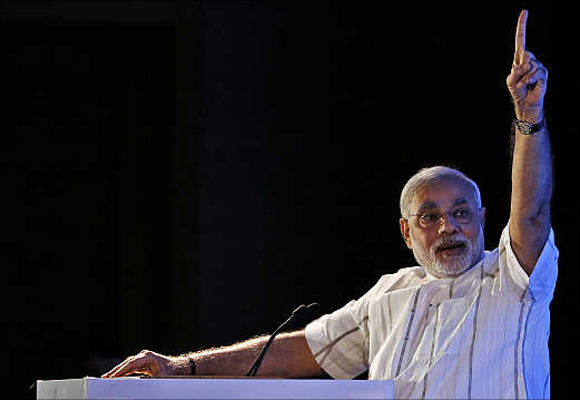 So, what’s the real difference between Sen and Bhagwati’s policy prescriptions?

Merely a difference in emphasis! Sen would like more public funding (as distinct from public provision) of basic goods; Bhagwati argues this is secondary to focusing on growth.

Of course, both these mechanisms can be true. In fact, both probably are true, which means the differences are even smaller than is claimed — just a question of which can work faster and more effectively.

One path can hardly be abandoned for the other; both mechanisms will need government attention. Nor is either major political party likely to act on only one mechanism, at the cost of the other.

So, why all the fuss?