Sign in  |  Create a Rediffmail account
Rediff.com  » Business » She is one of the world's most powerful women 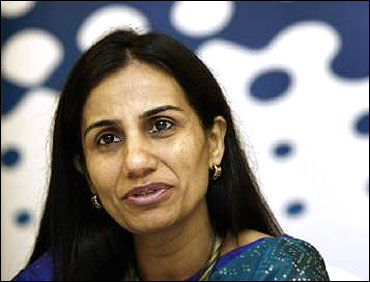 The BlackBerry is in silent mode and the excel sheets are replaced by the Satyanarayan Katha every full moon night when Chanda Kochhar is on her way home.

The MD & CEO of India's largest private bank prefers to use those 40 minutes in the car to read the verse.

Not so long ago, she used to read the narrative on Lord Vishnu for half an hour every morning, but as the days got longer at work, she has switched to the fortnightly routine in her "mobile" study.

Conventional wisdom has it that the Katha helps ordinary mortals overcome vices such as anger and ego.

Kochhar's perennially calm expression suggests the Lord has been extra kind to her.

Mention that and Kochhar breaks into a hearty laugh.

"I am religious, but not a ritualistic person. For example, I don't lose sleep if I can't go to the temple for more than a month. I also believe strongly in destiny," she says. 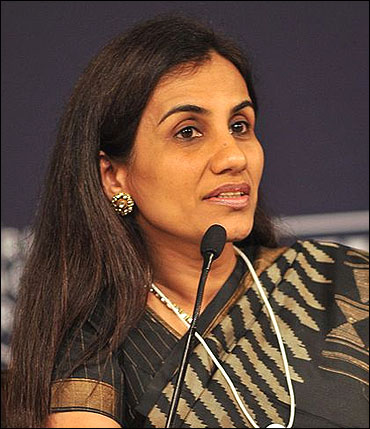 That's understandable, given that destiny played a big role in her choice of career.

As a child, she wanted to be an IAS officer, but life turned upside down when her father, who was the Principal of an engineering college in Jaipur, died when she was just 13.

Her mother then shifted to Mumbai with her three young children (Kochhar, 49, is the youngest) just to stay in close proximity to her extended family.

Among other things, that meant a huge adjustment in lifestyle.

"In Jaipur everyone knew everyone; in Mumbai, it takes time for anyone to know anyone," Kochhar says.

In a way, she adds, the sudden loss of her father strengthened her determination to face life's challenges.

"One has to thank God and family for whatever I have achieved.

At the same time, I must say God can help you only when you work hard," she adds, as the attendant serves fruit juice. 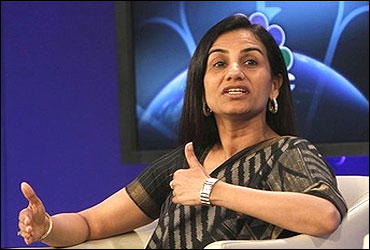 Since she's always on the wing, Kochhar doesn't have the time to follow the standard 'Lunch with BS' format of choosing a restaurant for us to host her.

Instead, she's invited us to the Emerald, the spacious dining room overlooking a carefully manicured garden on the top floor of the imposing 11-storeyed glass fa ade that serves as ICICI Bank's headquarters.

The lunch - a mix of Punjabi and Chinese dishes - is served in a hurry; no doubt the attendant knows that the boss wants this to be a brisk, working affair.

Kochhar is a sparse eater, but judging by the frequency with which the attendant tried to refill our plates, a gracious hostess.

The "culture of Mumbai" may have weaned her to a career in the financial sector, but the hard work was visible right away: she was a topper right through - economics graduation from Mumbai's Jai Hind College to MBA in Finance from Jamnalal Bajaj, where destiny again played a big role in changing her life. 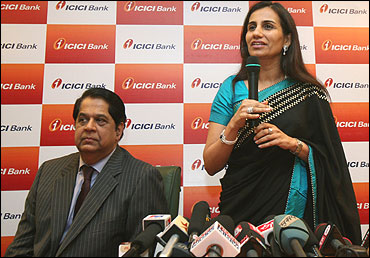 It was at Jamnalal that she met Deepak, first her batchmate and then life partner, and a certain gentleman called K V Kamath who came for the campus interview in 1984.

For Kochhar, who is the only banker in her family, the defining moment in her career came when she was asked to head the retail operations after running the corporate business for some time.

It was a risky move - corporate loans at that time accounted for around half the balance sheet and an even larger portion of profits. 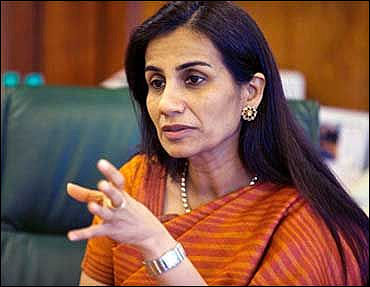 She also remembers Kamath's comments quite early in her career.

As the head of ICICI's Western Regional Office, she made a brief presentation to Kamath on the changes she has made in the functioning of the office.

But Kamath's question baffled her: "Who did you ask before making the changes?" Kochhar just about mustered enough courage to say, "No one". Kamath congratulated her for her initiative.

That's something that also impressed N Vaghul, then ICICI chairman.

When ICICI set up a commercial bank in 1993, she was only an assistant general manager.

But Vaghul chose her to lead a team that would decide everything about the architecture of the bank - an experience she reckons was invaluable.

"I was the employee number one in ICICI Bank," Kochhar says - a satisfaction that prompted her to turn down many lucrative offers from competition.

But all this has meant extraordinary hard work and having to live with the "guilt conscience" that every working mother suffers.

"There is no past tense to guilt conscience. I have been living with it every single day -even now," Kochhar says. 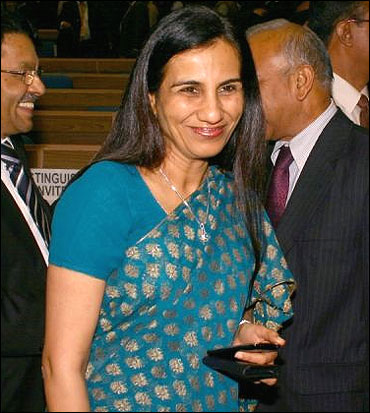 She, however, has no regrets as ultimately, one has to make a choice in life and work around it.

That explains her numerous "day trips" to New York on official work - she takes a late night flight so that she can reach her destination early morning NY time.

After a day of back-to-back meetings, she is on the flight back home the same night.

That means, though she is away for three days, it's actually one day because of the time difference.

"More than physical strength, one requires mental strength to do this day in  day out."

But her "supportive" family has made it worthwhile. Her husband is a businessman, Aarti has finished her engineering and waiting to do her MBA, and Arjun is in Class 10. "I think they are proud of me," she adds.

That must be a huge understatement going by her achievements in steering ICICI Bank through one of its most difficult periods soon after taking over as Kamath's successor in May 2009.

After her appointment as MD & CEO was officially announced in December 2008 (the board had informed her two months earlier), there was a series of high-profile exits.

But under her, the bank didn't mind speaking a new idiom of "no growth." 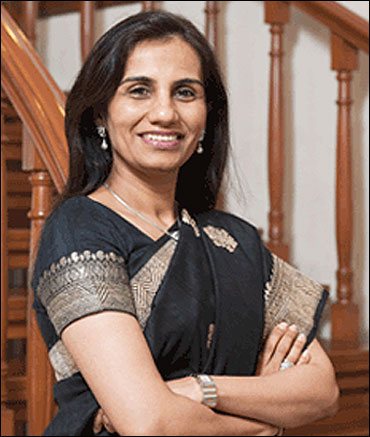 That turnaround story has been well chronicled, but what has not been spoken about much is the tremendous effort the occupant of the corner office had to put in to bring everybody on the same page.

The dessert arrives - fresh fruit and a chocolate mousse cake - but Kochhar prefers tea, and talks about the unspoken challenges.

"It was an apparent contradiction. Our public stance was no growth. But internally, we had to grow dramatically.

We were growing current account savings account (CASA) deposits (from 26 per cent to 41 per cent) and increasing our branch network. Similarly, we had to work very hard to reduce unsecured loans and grow secured loans.

Still, at the end of the year, you had to publish a report card that said no growth in loans," she says, adding the biggest challenge was to convince each one of her junior colleagues that this was necessary to set the foundation for a long-term profitable growth. 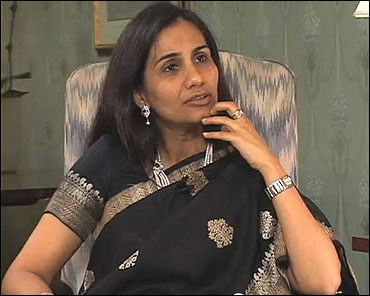 Two years and many battles later, Kochhar reels out numbers to prove her point. Apart from CASA, unsecured loans as a percentage of total loans have come down from around 11 per cent in mid-2008 to less than three per cent.

The net NPA ratio has come down from around two per cent to 0.9 per cent.

Provisioning costs have come down from 2.2 per cent annually to 80 basis points every year.

There was no surprise, therefore, when Bloomberg last week named her one of the 50 most influential in global finance and when Forbes listed her as one of the world's most powerful women.

Although all this leaves little time to do anything else, Kochhar says she still finds time to watch the latest Hindi  masala movies with family on weekends.

"That's a great stress-buster for all four of us who are super busy otherwise," Kochhar says, as she sees us off till the lift.

It's not difficult to figure out why Lord Vishnu should be happy with this devotee.