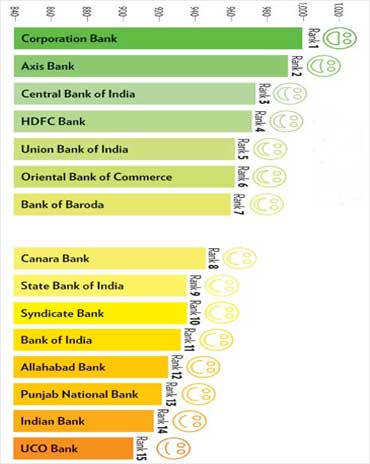 How friendly is your friendly neighbourhood bank? Does it treat you royally or does it give you a royal ignore?

You would get a fair idea when you approach it for availing a product or service, but a bigger yardstick for judging the value the bank attaches to you as a customer would be when you confront it with your grievances.

These aspects of customer friendliness, however, are just a tip of the iceberg.'

The Outlook Money-TNS Study of India's Most Customer Friendly Banks takes a look at the perception of 3,430 customers across 17 parameters in six major cities.

Participating banks. Of the plethora of banks in the country, 15 were found to be eligible for the study.

The first stage of filtering was based on the parameters finalised by the Outlook Money Awards jury for the Best Bank category.

Once this list was arrived at, banks were sorted on the basis of deposits. From this, the top 15 banks were chosen to be covered in study. 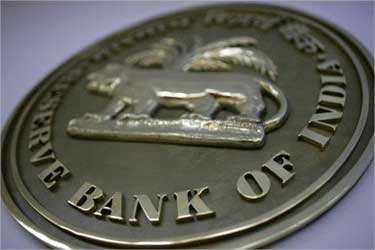 The study. Six centres, Delhi, Mumbai, Kolkata, Chennai, Bangalore and Hyderabad, were covered in the study, which was conducted between October-December 2010.

In all, customers rated banks on 17 parameters. Let's take a look at how the participating banks stacked up against each of these attributes.

The respondents were asked to rank these attributes in the order of importance. It would be worth noting that there was no single institution which dominated the rankings attribute-wise.

Also, under several parameters, the line separating the best from the rest was very thin indeed. That is not entirely surprising, however. 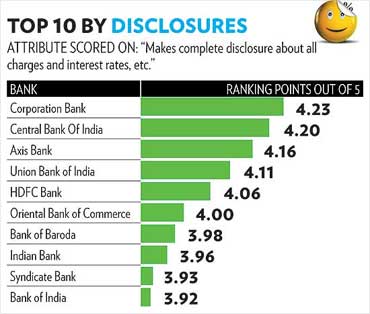 For one, by applying the shortlisting criteria, any bank that was found wanting in any aspect, be it safety of a customer's deposits or transparency, responsiveness or reliability, was eliminated.

So, the 15 banks that finally qualified for the study were those at the top of the heap, and to the naked eye, there is little to separate them from each other.

That said, the search was on for the first among equals when it came to the customers' experience with it.

Disclosure about charges and interest rates.

The Banking Codes and Standards Board of India (BCSBI) has laid down the Banks' Code of Commitment to customers.

Among the many things in the Code, it is obligatory on banks to explain in detail the key features of a service or product a customer is interested in, including the applicable interest rates, fees and charges. 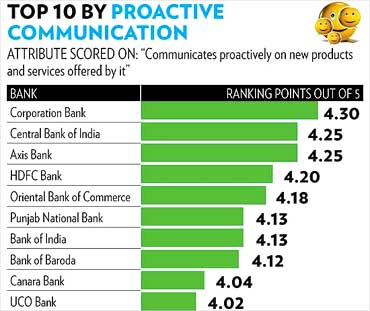 Further, the Code requires banks to inform customers about any changes in interest rates or other charges.

Under this parameter, the difference between Corporation Bank - which topped the table - and the institution that finished at the bottom - Allahabad Bank - was just 0.44 points.

If you think that wasn't close enough, the difference between the winner and the runner-up was a mere 0.03 points.

Interestingly, the first two spots under this attribute were taken by PSU banks - Corporation Bank and Central Bank of India - which are generally not regarded as open and transparent as private sector banks.

Generally, most banks - whether PSUs or private sector - launch new products or services with much fanfare, using all tricks in the book to reach out to the customers.

In fact, there is little to choose between private and public sector players when it comes to dissemination of information regarding new products and services.

So, while the mean score for this attribute was 0.01 points lower than the previous attribute, customers thought highly of their banks on this parameter. Just 0.40 points separated the institution at the top from the one at the bottom. 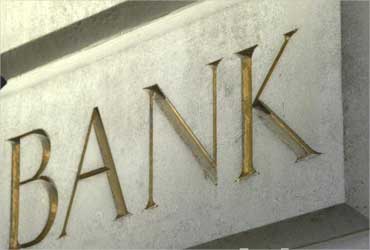 And here too, the top two positions were occupied by the same PSU banks - Corporation Bank and Central Bank of India.

The third position was bagged by Axis Bank.

Public sector banks occupying the top two spots in these two categories could be attributed to the fact that they are typically more transparent than private sector banks when it comes to interest rates on retail loan products.

For instance, if you are looking for the applicable rate of interest on home loans for 10 years, you would get the exact information on the websites of PSU banks.

The same can't be said for all private players. 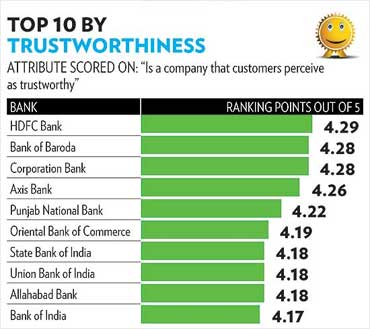 Strong fundamentals have ensured that hardly any of the nationalised banks have gone bankrupt in the recent times.

This is largely due to the strict regulations put in place by the banking regulator, Reserve Bank of India (RBI).

The fact that trustworthiness weighs heavily on customers' mind is reflected in the even closer competition on this parameter among the qualifying banks.

So much so that on a scale of one to five, all banks have got more than four points, with the institution at the top getting 4.29 points and the one at the bottom, 4.10.

While PSU banks are perceived to be more trustworthy because of high government stake in them, it's HDFC Bank that has topped the table.

Click on NEXT for Top 10 banks by Complaint Resolution... 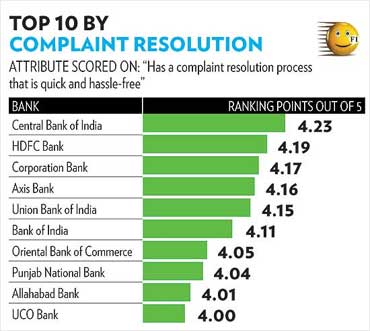 The Banks' Code of Commitment to customers lays down a detailed complaint resolution system.

However, having a system in place is one thing and ensuring that the system is effective is another.

In this age, when banks have a call centre/customer service department as the first link to resolving complaints, most customers approach their respective bank branches only when all other avenues fail to provide any respite.

In other words, when they approach a bank branch, more often than not, they are desperate to get their problems resolved.

Central Bank of India emerged at the top in terms of speedy complaint resolution followed closely by HDFC Bank. Corporation Bank and Axis Bank were placed third and fourth.

Click on NEXT for Top 10 banks by ATM Network Coverage... 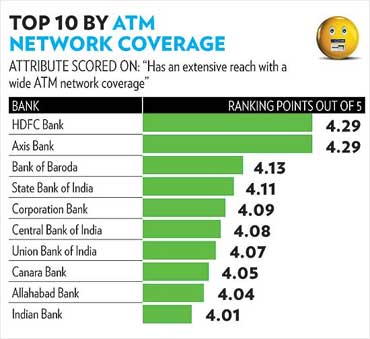 At a time when you can use third-party ATMs to meet urgent cash requirements, this attribute may not be that significant while judging a bank's customer-friendliness.

However, there is no denying the fact that a wide ATM network does help, especially when you require cash, typically more than Rs 10,000, at short notice.

So, it's not surprising that the wide ATM network of the two participating private sector banks helped them occupy the top two slots.

Click on NEXT for the Top 10 banks by Professionalism... 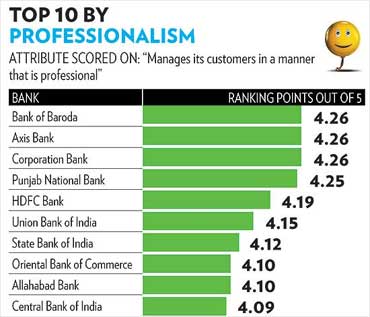 Professionalism of the company

The transformation of Bank of Baroda and Axis Bank are iconic success stories in the banking sector.

These two banks, along with Corporation Bank, topped the tables on the parameter of professionalism of the company. Interestingly, Indian Bank, one of biggest turnaround stories in the industry, found itself at the bottom of the table.

Click on NEXT for Top 10 banks by Banking Hour Covenience... 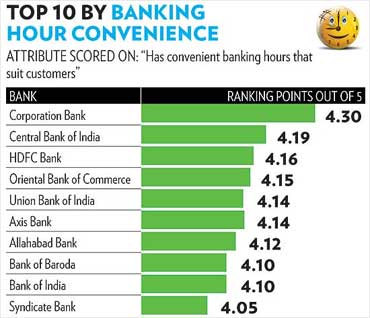 Click on NEXT for Top 10 banks by Informed Staff... 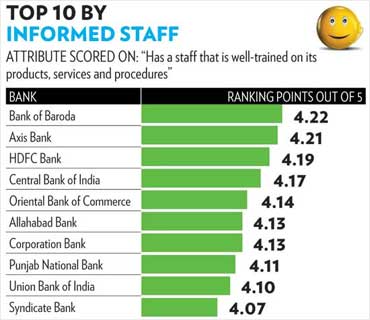 Bank of Baroda and Axis Bank stood first and second, respectively, with an incredibly thin margin separating the two.

Surprisingly, as against the common perception that private sector staff are better trained, HDFC Bank finished third under this attribute.

However, the difference in points among the top three institutions under this attribute was minimal.

Click on NEXT for Top 10 banks by Staff Courtesy... 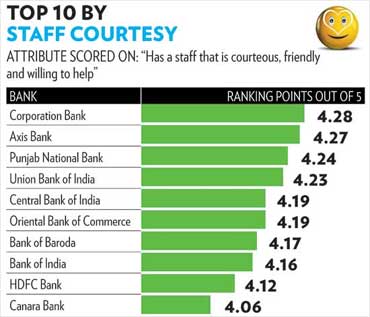 A courteous and friendlystaff makes for a pleasant banking experience.

Click on NEXT for top 10 banks by Response Time... 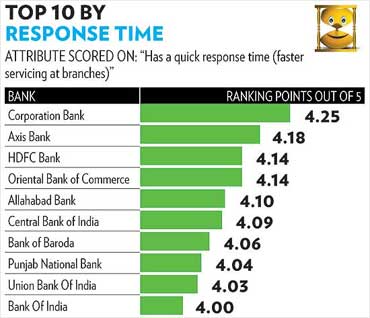 This parameter is obviously linked to the previous one as a courteous and friendly staff would, more often than not, mean faster response time at the bank branch.

Here, too, Corporation Bank and Axis Bank topped the table.

Click on NEXT for the top 10 banks by Customer Understanding... 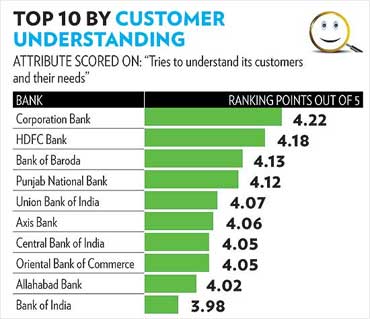 Knowing the customer and their needs

Thanks to investments made in technology by banks, based on spending patterns and customer profiles, they are, to a great extent, able to gauge the future needs of customers.

In this category, too, Corporation Bank topped the tables, with HDFC Bank a close second. 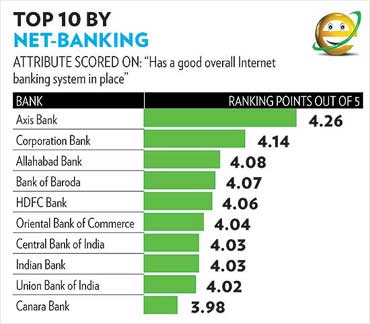 With people working under tight schedules and technology playing a crucial role in every walk of life, banks are expected to keep pace.

Internet banking is the future of banking, along with mobile banking. Under this attribute, Axis Bank topped the table.

Click on NEXT for top 10 banks by Transaction Efficiency... 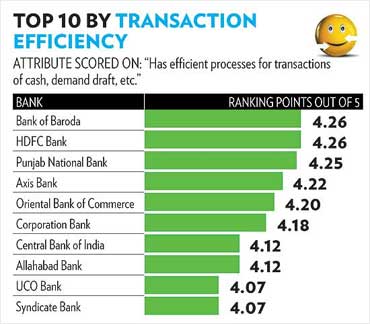 Bank of Baroda's transformation has helped change the public perception about efficiency of PSU banks.

On this parameter, Bank of Baroda and HDFC Bank shared the top slot. Punjab National Bank was a close second.

Click on NEXT for Top 10 banks by Customer Updation... Even as Axis Bank occupied the top slot, public banks held sway under this category.

In fact, HDFC Bank was placed sixth on the list.

The results, thus, busted the myth that public sector banks are less effective communicators compared to their private sector counterparts. 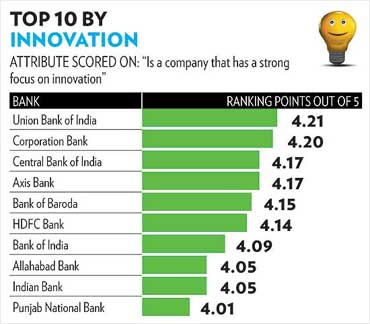 In the light of the stiff competition in the industry, it's in a bank's interest to keep innovating. both in terms of product and services, to stay ahead of the rest of the pack.

Union Bank of India emerged the winner under this attribute. Corporation Bank was a close second.

Click on NEXT for the Top 10 banks by Phone Banking... 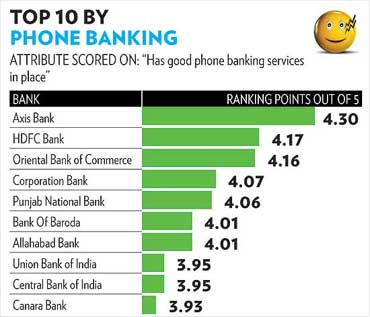 As mentioned earlier, phone banking is one of the areas where the future of banking lies.

Even today, our first reaction when we find that our ATM-cum-debit-card is not working or money is falsely debited from our accounts, is to call up the customer care department of the bank.

Click on NEXT for top 10 banks by Hardselling products... 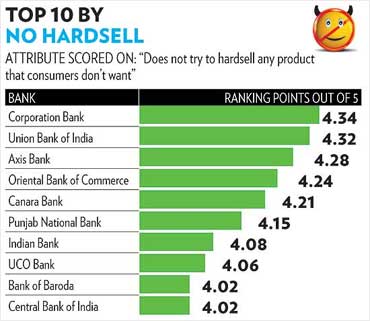 Hard-selling products that customers do not want

Private sector banks are perceived to be notorious when it comes to unsolicited calls.

No wonder, the first two slots under this category, that is the banks which trouble customers the least in this regard, were taken by public sector banks - Corporation Bank and Union Bank of India. HDFC Bank found itself at the bottom in this category. 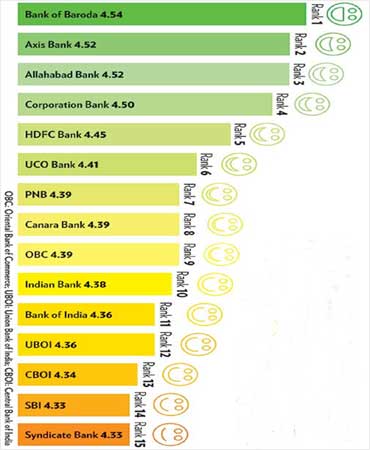 The second, on the basis of the willingness of respondents to recommend the bank which they currently have a relationship.

Such an overall recommendation would be a comprehensive measure of their opinion of the bank in question. Also an individual will recommend a bank to somebody only when he is completely satisfied with its services.

Derived method. It does not come as a surprise that Corporation Bank, which occupied the top spot on seven parameters, was the overall winner. Next came Axis Bank, which fared consistently well through the study.

Overall ranking based on recommendation. Such overall recommendation is a comprehensive measure of a customer's opinion of the bank they are recommending.

So, if you are looking for a banker that will make your experience happy and trouble-free, you could use this list. You can be further assured that these are safe bets since all the doubtful ones were eliminated by the shortlisted criteria. 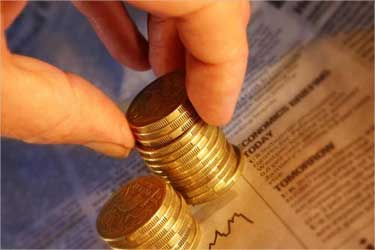 The Outlook Money-TNS Study of India's Most Customer Friendly Banks was conducted between October-December 2010 over six cities and covering 3,430 respondents. The survey was conducted by TNS, an international research firm with expertise in incentive perception and satisfaction.

A total of 15 banks were selected for the study across six cities - Delhi, Mumbai, Kolkata, Chennai, Bangalore and Hyderabad. Criteria used to shortlist the banks:

Attribute based Rankings. Along with overall rankings, ratings have been taken on a set of pre-defined attributes to gauge the importance of attributes for savings account-holders.

Derived Ranking (satisfaction and importance). The ranks are obtained after calculating the score which is a sum of their satisfaction with their bank on different attributes weighted as per their importance to them.

Recommendation-based Ranking. Rankings are derived on the basis of the willingness of respondents who recommended to others the banks they are currently using.

Respondents provided ratings on importance and satisfaction for the following attributes. The scores presented while ranking are mean scores. That is, these are averages of the ratings provided for a particular activity.