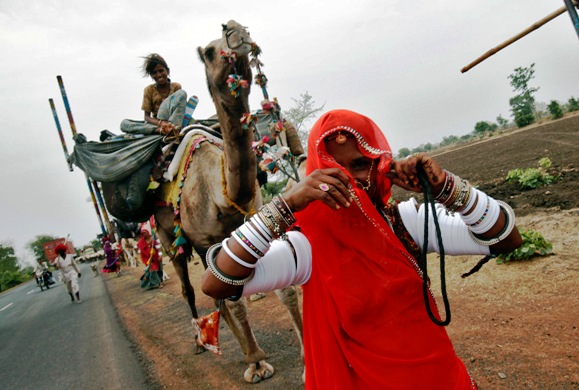 How did a state, which has been growing at a rate much less than the national average in the past seven years, manage to reduce poverty levels by 20 percentage points in the same period?

Was it a result of under-reporting or bad sampling?

A Jaipur-based economist called it a ‘paradox of poverty’.

Delhi-based economists tried to make sense of this fall (if the numbers are indeed right, they would say) by offering explanations like: Rajasthan has been investing in social infrastructure from 2000 onwards and the reduced poverty level is a result of that. Steady performance on the agriculture front for the past 15 years was also seen as a contributory factor. 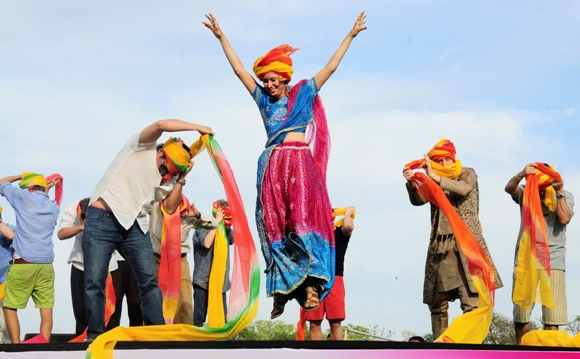 Image: A tourist celebrates after finishing first in a turban tying competition held as part of the celebrations of Holi in Jaipur.
Photographs: Reuters

But there are instances of other states doing the same with very modest result to show on the poverty reduction front.

The question, then, is what has Rajasthan done that other states haven’t?

It simply reduced the medical costs of its people, according to Samit Sharma, managing director of Rajasthan Medical Services Corporation, which implements the scheme of providing free drugs and basic diagnostic tests to the common public.

“According to the findings of credible studies, three per cent of the families in the country change their status from APL (above poverty line) category to BPL (below poverty line) because of exorbitant healthcare costs,” says Sharma.

He adds as many as 2.1 million people in Rajasthan used to get pushed to the BPL category because of medical costs. 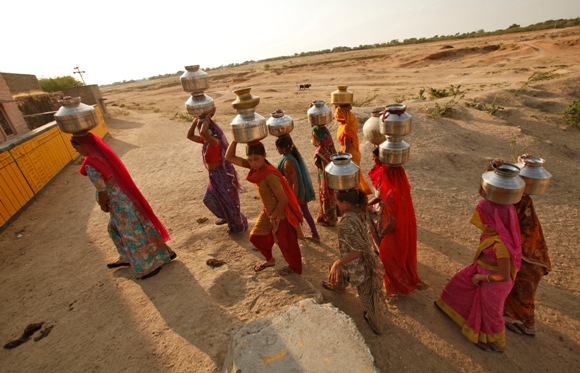 “Healthcare is the second most important cause for rural indebtedness.

"Twenty-four per cent of all indoor patients get pushed below the poverty line because of debt incurred in order to meet the treatment expenses. And 40 per cent of all patients borrow money to meet hospitalisation expenses.”

The scheme was launched with the aim of not only making healthcare services affordable to people, but also taking people out of the poverty level.

If the recent poverty numbers are any indication, the scheme is working.

“Rajasthan may not have big growth numbers to show, may not have attracted mega investment proposal, and it is not a state whose development model is studied and talked about.

“But by doing the basics right, the state has brought the cost of living down, making it easier for people to live a decent life here,” says a Jaipur-based journalist. 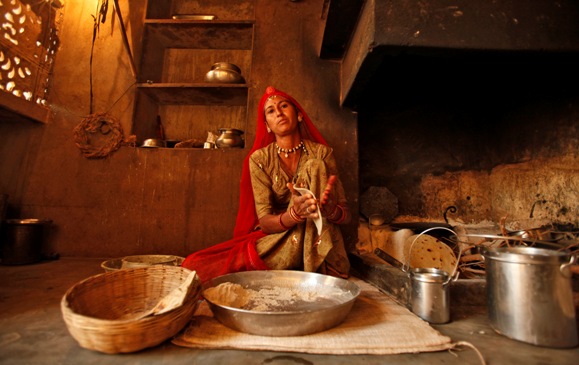 Image: Laxmi, 34, who works as a construction labourer, prepares a roti inside her house at Merta district in Rajasthan.
Photographs: Mansi Thapliyal/Reuters

Affordable healthcare system is not the only social welfare scheme that has been launched recently.

A government booklet talks about as many as 16 ‘flagship’ schemes. Notable among them are BPL housing, pension, food security, girl child security, affordable housing and interest-free loan for farmers.

“Our aim has been to provide affordable housing, foodgrains and quality education to various sections of society through a number of social security schemes,” says Ashok Bairwa, Rajasthan’s minister for social justice and empowerment.

“The state’s economy is still predominantly agrarian, which benefited from good monsoon for the last four to five years,” observes Surjit Singh, director of Jaipur-based Institute of Development Studies. 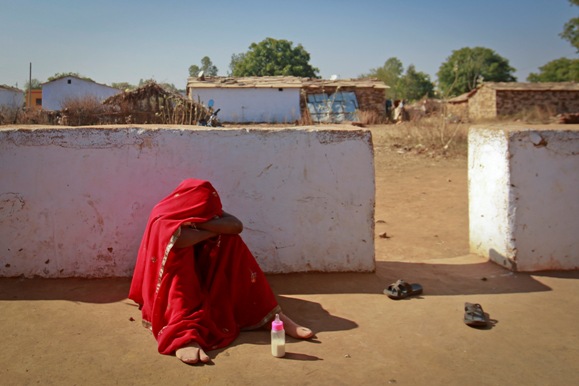 Image: Krishna, 14, breaks down after her husband Kishan Gopal, 16, came home drunk in a village near Baran, located in Rajasthan.
Photographs: Danish Siddiqui/Reuters

The government could afford social welfare schemes because of good monsoon and consequent robust agriculture production.

The state could afford such schemes because of the royalty it received from oil exploration at Barmer.

Observers, however, point out that most other states, too, have welfare schemes albeit with some variations.

Madhya Pradesh, for instance, has a Ladli Laxmi Yojna Scheme that encourages the birth of girl child.

Chhattisgarh has a food security scheme that covers nearly 90 per cent of the population. The government of Bihar gives bicycles to girls, encouraging them to attend schools regularly. 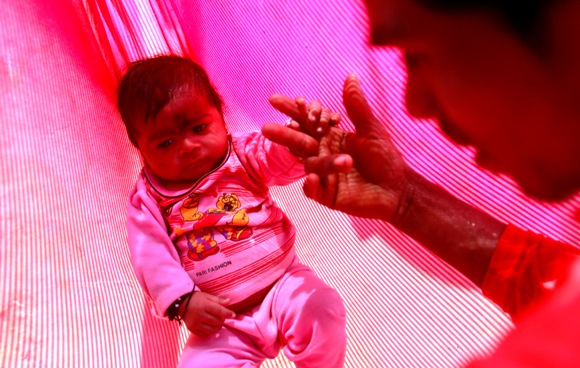 Image: Gopal Kishan, 16, plays with his four-month-old baby Alok lying in a hammock, at his wife's house near Baran, Rajasthan.
Photographs: Danish Siddiqui/Reuters

What helped Rajasthan reduce its poverty levels substantially is what is known as the chief minister’s free medicine and tests scheme.

“The scheme is doing well and is perhaps one of the reasons for reduced poverty levels in the state,” argues Surjit Singh.

He says the government’s renewed focus on social security schemes is the reason behind the reduction in the number of poor in the state.

Under the scheme, patients get not only the basic medicines but that for the treatment of cancer, diabetes, asthma and heart diseases, free of cost.

Currently, as many as 25 varieties of anti-cancer drugs are being distributed through this scheme.

Sharma says there is no compromise with the quality of medicines as the procurement is done from reputed companies. 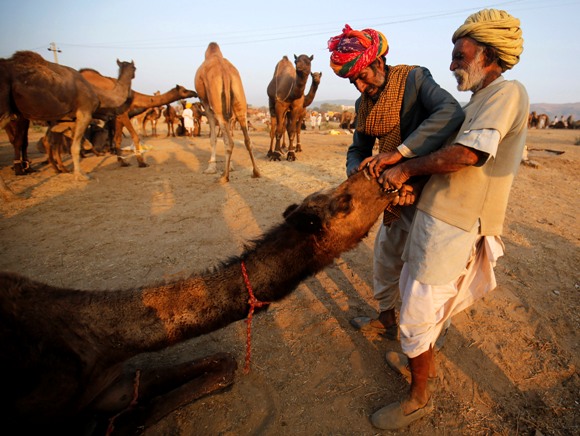 Image: Camel herders try to attach a nose ring on a camel at Pushkar Fair in Rajasthan.
Photographs: Danish Siddiqui/Reuters

“With quality healthcare at almost no cost, the perception of people towards government healthcare system has begun to change.

“With accessibility has come acceptability.

“What is heartening to note is that people have become conscious of the healthcare requirements of their girl child. If the current trend continues, I am confident that once the next set of data comes, the state will see the
biggest fall ever in infant mortality and maternal mortality rates,” adds Dr Sharma.

According to the estimates of RMSC, since the launch of the scheme, it has resulted in net savings of Rs 3,000 crore (Rs 30 billion) by way of people’s expenditure on medicines.

Assuming at least one-fourth of the people (17.5 million out of 70 million people) availed of the benefits of the scheme, it has resulted in per capita savings of nearly Rs  1,700 in almost 18 months or Rs 3 a day.

Additionally, people would have saved on tests such as X-ray, ECG, blood tests, etc. 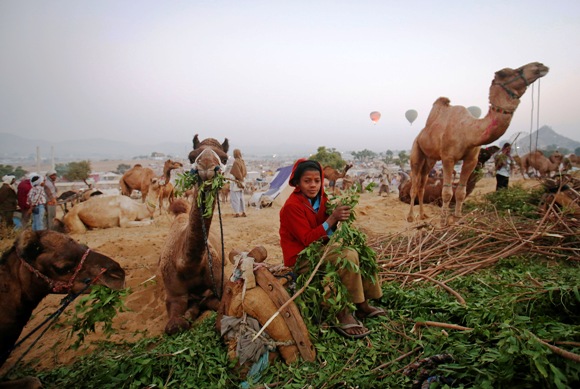 The cost of drugs procured for free distribution in Rajasthan in the last 18 months is Rs 280 crore (Rs 2.8 billion).

Is this enough to take a large number people above the poverty line as the recent data suggest?

Quite likely, given the findings of the latest National Sample Survey Office round on per capita monthly expenditure. The data suggest that people, on an average, spend 6.9 per cent on medical care in rural areas and 5.5 per cent in urban.