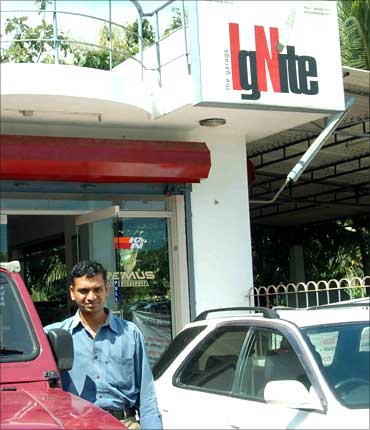 Though a mechanical engineer, 29-year-old Raghav Rangarajan was not satisfied with the lucrative software job that he landed after graduation.

This courageous youngster knew how to chase his dreams and, two years back, chucked his 'safe' job to become an entrepreneur.

Rangarajan said Ignite, his workshop on the ECR Road in Chennai, is India's first 'Green Garage'.

Saluting his entrepreneurial spirit, he was made a TED Fellow in 2009. TED (Technology, Entertainment, Design) is where the world's leading thinkers and doers gather to share ideas worth spreading.

In this interview with Shobha Warrier, Rangarajan talks about how he chased his passion for machines and started Ignite.

On his love for machines even as a child

My love for machines started at a tender age of 6 or 7 when I was presented with plastic building blocks with pulleys, with which you could make working models of cars, trucks, etc. Right from that age, machines have fascinated me.

In no time, I started spending time in workshops. After school hours, I used to go to workshops and spend my time under cars! I even started tuning my father's car as a school boy.

The first engine I opened was that of my friend's bike's. I was in the 8th standard then and was curious to know how the engine worked. 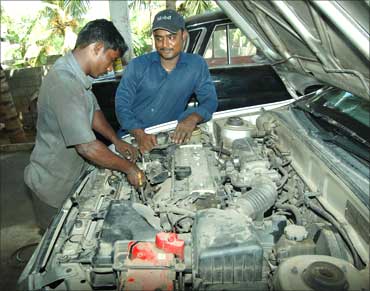 On getting into motor sports when in school

When I was in class 11, I started participating in motor sports - both cars and bikes. More than racing, I enjoyed spending time with the mechanics, to find out what would help the machines move faster.

It was but natural for me to study mechanical engineering but the first year and a half were frustrating as I didn't see any machine; it was only theory.

I felt there is a disconnect between what is being taught and what the present scenario is as the text books are quite outdated.

Once you start working on machines after your college, you realise that what you actually learnt makes sense. The fundamentals will not change and it gives you a strong foundation.

So, I will not agree with those who say that what is taught in college is not in sync with what we actually do.

If you know the fundamentals, you will be clueless about how a machine works.

Most of the mechanics do not have that basic knowledge; they simply learn from experience. I strongly feel that a professional degree definitely helps in building a strong foundation.

On studying mechanical engineering and then working as a software professional

It is unfortunate that people study something and do something else. I also did the same. I joined a few automobile companies like Hyundai after graduation.

Those were the days of IT boom and my peers in the software field were doing much better than me. I also decided to join the IT bandwagon consoling myself that I could indulge in my passion during the weekends and that I was still into motor sports.

But I was not satisfied with what I did. I was confused and pondered on what exactly I wanted to do in life.

I also felt that I was not following my heart by joining an IT firm. 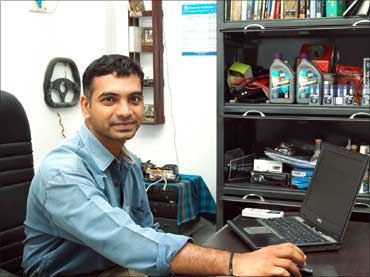 On becoming an entrepreneur

It was by accident that I finally became an entrepreneur. When I was working as an IT professional, many of my friends started asking me whether I was going to start a workshop of my own.

They also offered to pitch in with investment if I were to start a workshop. The offers even came from my own bosses at the IT firm. They were genuinely concerned about me and said I didn't belong there.

I hail from a family of working professionals. So, there was no chance for me to even dream about becoming an entrepreneur.

In fact, my parents wanted me to work in a multinational company and be a general manager or someone like that. So, the idea of becoming an entrepreneur did dawn on me at all.

I am sure all first generation entrepreneurs go through plenty of turmoil and confusion in their minds before they start something of their own. I have seen it happening to others too.

I wondered why I didn't have confidence in myself when my friends were so confedent about me.

When I resigned to start my own workshop, my family was shocked. An educated guy starting a workshop is still shocking for the society.

I named it Ignite as suggested by a friend as the name is connected to ignition and passion.

Rupees five lakh went as advance for the premises and Rs 200,000 for civil works and Rs 150,000 for the equipments. I employed two mechanics.

Today when I look back, I realise that the reserve money I had would have lasted only for two months. If cars had not rolled in, I would have had to close the shop. I knew about this at that time also but I decided to take the risk.

As I had no track record of doing any business, banks were not ready to give me any loan. 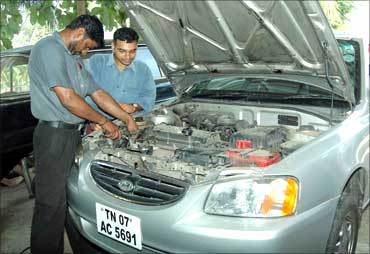 Image: Rangarajan with a mechanic at Ignite.
Photographs: Sreeram Selvaraj

The first customer comes after a month

We had the conventional pooja with many of my friends attending it. The next one or two weeks were the days of waiting.

Not a single car came in. I was very tense. Then I consoled myself that I hadn't done any marketing and nobody knew there was such a workshop.

The first customer who was not my friend came after a month, and it was an Opel Corsa. Till then, we were servicing only my friends' vehicles.

When it took so long for the first customer to come, I made pamphlets and started going to car dealerships. It was like when you were pushed into a swimming pool, you learn to swim.

What actually helped me initially were a few clients who came with problems which could not be solved by others. They were active in automotive forums and when I solved the problems, they wrote excellent reviews in the forums, and it helped us a lot.

I don't believe in taking volumes because I like to work on every car. I test drive and my involvement in the repair is there in all the cars. I plan to do this for another 2-3 years.

I invested in the latest gadgets like the scanner which all authorised dealers have, of that particular brand. I also got all the software needed from the US. I don't discriminate between a Maruti 800 and a BMW! 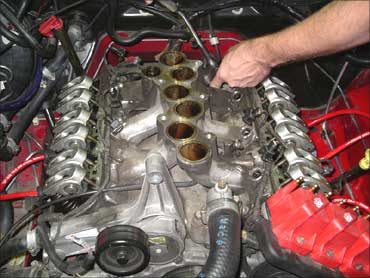 I call Ignite a green garage as I take every effort to ensure that our workshop has minimum impact on the environment. Maybe my trips to the jungle helped me love environment more.

Whenever I visited the forests, I saw to it that nobody left any garbage like plastic bags there.

In a commercial work shop, whatever oil is drained is let into the soil or a well. I have a system by which we collect used oil and channel it to civil contractors and oil cleansing companies, and not cause damage to the environment.

I also see to it that minimum paper is used and information is passed via emails. I encourage my clients to accept bills via email.

It was a friend who recommended my name. I thought I was too insignificant a person to get invited but I was short listed and I was made a Fellow. I got to meet so many talented achievers there and it was a humbling experience.

I am very passionate about motor sports. We already have our own team, driver and a vehicle tuned by us, called Team Ignite, and we plan to make our mark in Motor Sports in India.

On how the workshop grew

In the first month, I hardly made business worth Rs 10,000. By the third month, I could pay the rent, all my bills and salary. After that we started making small profits.

I miscalculated our growth potential. I thought it would take five years for me to saturate in this place in terms of the capacity of cars to accommodate.

What I thought would take five years took only one and a half years. So, I have plans to expand with some more investment which will not be an issue right now.

Perhaps I am very conservative in my approach. Passion comes first for me and only then comes turnover and profits. Yes, I would like to have a multi branch, multi brand set up. I feel if you follow your passion, money will follow.