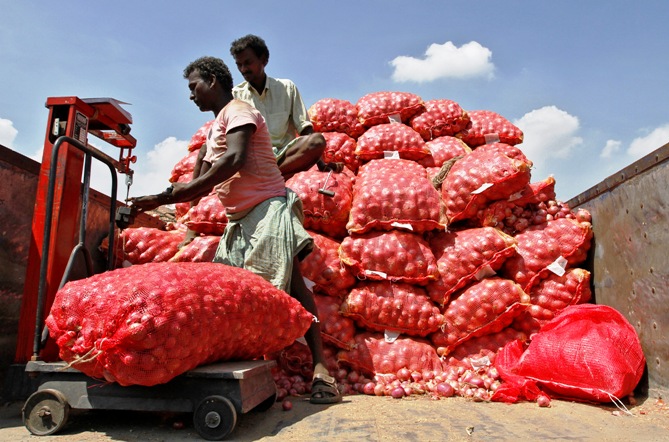 Image: A man weighs a sack of onions before unloading it from a supply truck at a wholesale market in Chennai.
Photographs: Babu/Reuters Dilip Kumar Jha in Mumbai

After falling to the level of cost of production, onion prices recovered to record a 50 per cent increase in the past two weeks, following controlled supply from farmers.

In the benchmark Lasalgaon (Maharashtra, near Nashik) market, Asia’s largest spot onion selling yard, it was Rs 8-10 a kg on Wednesday, a steady increase from Rs 5-5.50 a kg two weeks earlier.

The model price announced by the Nashik-based National Research and Development Foundation showed a little over 50 per cent increase in the price on February 15, to close at Rs 9.15 a kg on Tuesday from Rs 6 a kg two weeks earlier.

The off-spot prices were Rs 3.50 a kg two weeks before, with farmers planning to dump on the road instead of selling in mandis.

“Total arrivals slumped to 322.5 tonnes when onion was ruling at Rs 6 a kg on February 15.

"But, with the increase in prices, arrivals also increased. 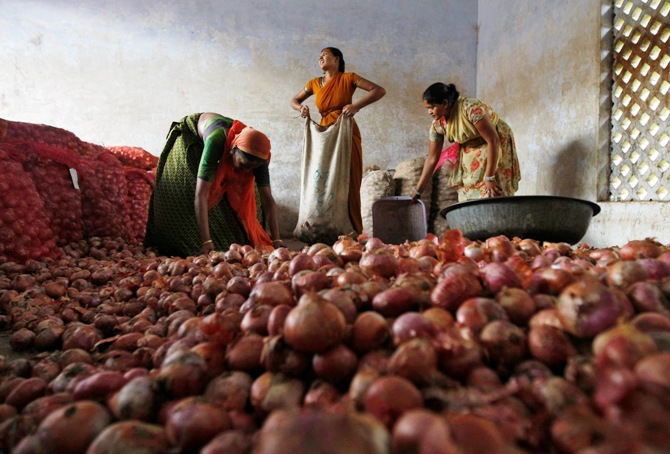 Image: Workers fill sacks with onions after sorting them at a wholesale market in Ahmedabad.
Photographs: Amit Dave/Reuters

There is almost no export demand due to the short shelf life. The quality of the late kharif season crop (largely harvested and supplied to the market currently) is poor, compared to the rabi season crop which has a shelf life of 12 months.

Hence, exporters are currently abstaining from booking in large quantity. 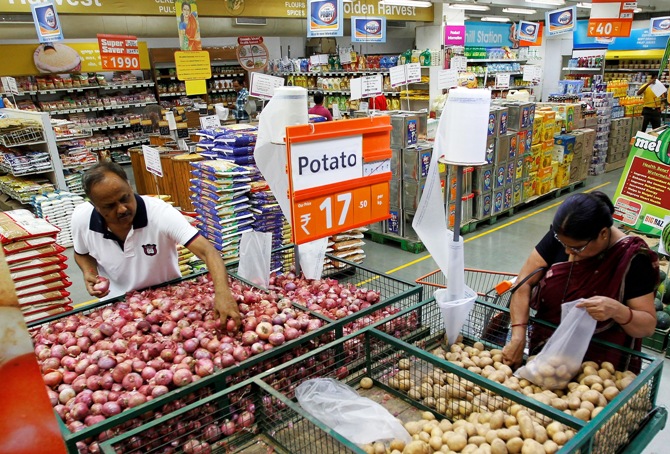 “The current price rise can be attributed only to controlled supply from farmers, as their holding capacity has increased.

"Both exporters and bulk consumers remained absent from the market,” said a senior official from one of the largest onion export houses.

India’s exports declined 33 per cent to 853,000 tonnes in the first eight months (April-November) of the current financial year.

India exports onions to North Africa and West Asia, Sri Lanka and a number of Southeast Asian and neighbouring countries.