Image: A Jet Airways passenger aircraft takes off from the airport in Ahmedabad.
Photographs: Amit Dave/Reuters Aneesh Phadnis in Mumbai

About 97 per cent of Jet Airways’ standalone loss of Rs 267 crore (Rs 2.67 billion) in the third quarter of the current financial year was from domestic operations.

In the first and second quarters, domestic operations’ share of loss was 74 per cent and 71 per cent, respectively.

SpiceJet, which does not share the break-up of revenue and profit for domestic and international routes, did not respond to an email questionnaire.

Unlike the domestic market, which has seen high operating costs and fare wars, the international market in the segment has been stable. 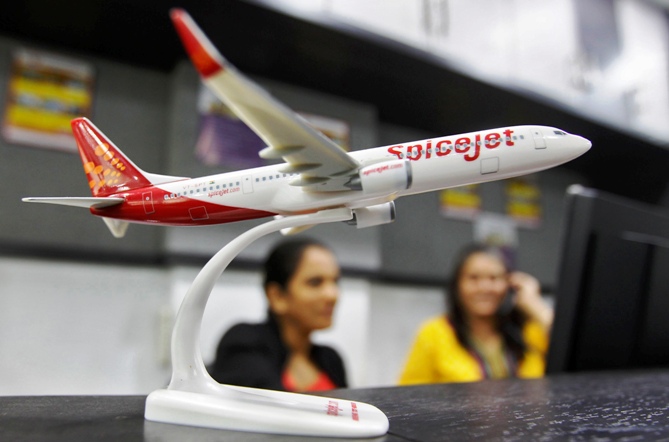 Image: Employees work inside a travel agency office besides a model of a SpiceJet aircraft in Ahmedabad.
Photographs: Amit Dave/Reuters

Growth in the domestic market in the second quarter was fuelled by low fares but this has impacted airline profits.

Yields and occupancy levels in foreign routes, generally, were stable.

The airlines can also save on fuel bills, as the purchase of fuel for international flights is exempt from state value-added tax.

The third quarter is peak season for travel, when airline yields and loads improve.

One reason for this is a Rs 92-crore (Rs 920-million) profit from sale and lease-back of planes, reported in the international operations profit statement.

International revenue also showed a better growth, of 10.3 per cent in Q3 in comparison to the same period last year.

Domestic revenue was up six per cent.

“Overall, SpiceJet’s international operations should have shown a positive result.

“Its flights to Dubai, Sharjah and Kabul are performing well. Loads are stable and there is no price war as seen in domestic routes.

“This would have enabled the airline to offset the losses from some other international routes,” a sector source said. 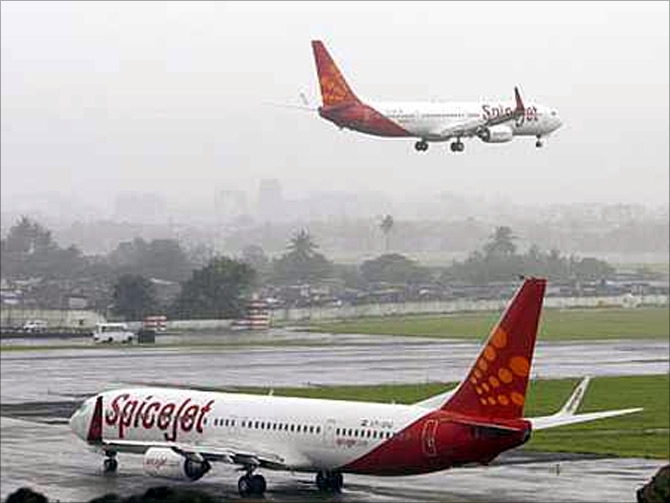 Last month SpiceJet announced it was discontinuing its Pune-Bangkok, Varanasi-Sharjah and Delhi-Guangzhou flights, while adding new ones to Hong Kong and Dhaka.

It also announced suspension of services to Puducherry, Trichy, and Allahabad.

“We doubled our international business in the quarter ended December 2013 over December 2012.

“But, again, there are limits; when you are not making decent margins and not having a viable profit and loss (statement), your ability to invest in new stations and developing the market in a place outside of India (is hit); there is only so much one can do.

“So, at this moment, even our international expansion will be a lot more muted,'' Sun Group (which has majority share in the airline) chief financial officer S L Narayanan told a television channel. 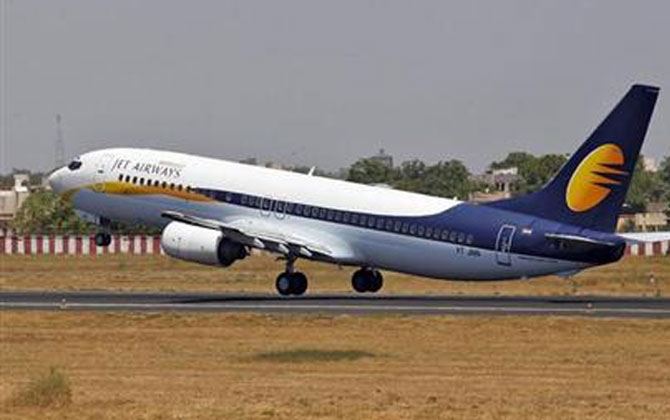 The Centre for Asia-Pacific Aviation estimates domestic airlines would post a loss of $1.2 billion (Rs 7,440 crore) for FY 2014.

CAPA also said Jet was likely to freeze its domestic operations at the current level. SpiceJet is conducting a review of its operations, which could see a short-term reduction of its domestic fleet by about 10 planes.

CAPA estimates domestic traffic growth in FY 2015 in low single digits due to weakness in the economy and said there was uncertainty about the impact of new airlines, such as AirAsia and Tata-Singapore.

A fare ware could boost traffic growth at the cost of airlines' financial health.

However, international traffic is expected to grow 10-12 per cent in FY2015 and could exceed 15 per cent if the government relaxes its rules on international operations and signs more bilateral traffic rights’ treaties.