Sign in  |  Create a Rediffmail account
Rediff.com  » Business » King of fruits may not bring good times this year 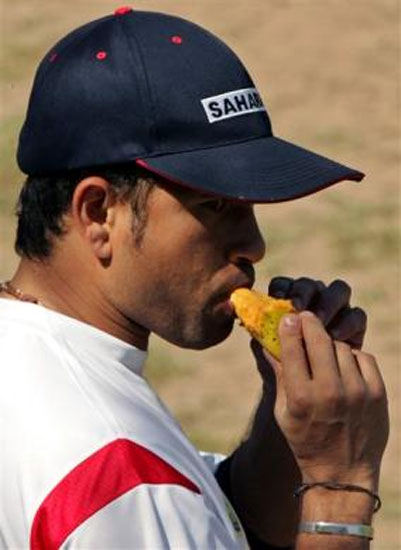 Mango growers are staring at a bitter harvest this year, due to crop damage after the recent bout of unseasonal weather. An erratic climate has damaged the crop, in various stages of maturity across the country, and some estimates suggest a fall of up to 40 per cent in yield from major mango-producing regions. Exporters also fear the crops salvaged might not be acceptable to foreign buyers, due to quality issues.

The damage has been across five states — Uttar Pradesh, Andhra Pradesh, Bihar, Gujarat and Maharashtra. These together account for two-thirds of the country’s total mango production, according to the National Horticulture Board.

Production could see a drop from 1,800 million pieces in 2012-13, according to reports from across the country. 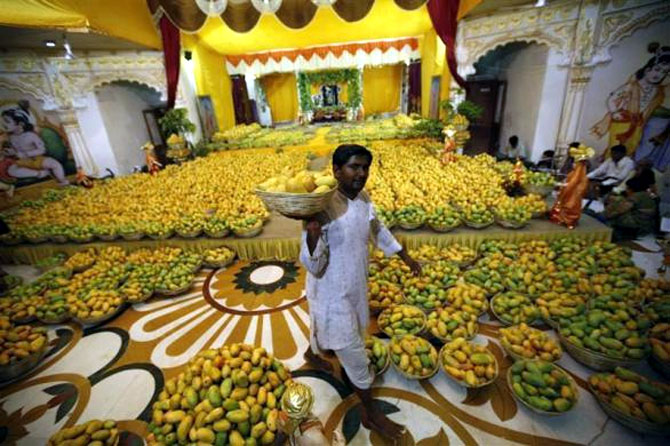 Image: A priest carries a basket of mangoes to distribute among devotees after it was offered to Lord Krishna inside a temple during a mango festival in Ahmedabad.
Photographs: Amit Dave/Reuters

The crop in UP and Bihar, in flowering stage at this time of the year, has been badly hit by inclement weather. According to Haji Siraj Mehndi of the All-India Mango Growers Association, flowers are either damaged or have become weak. This could result in poor-quality output of ‘dussehri’, a variety  grown in that region. Shiv Saran Singh, president of UP Nursery Sangh, says almost 30 per cent of the mango crop has been damaged by rain and hailstorm.

Estimates from western India suggest 40 per cent of the crop was hit by hailstorm and unseasonal rains in Junagadh, Saurashtra, home to the popular Kesar mango.

Similar damage has been seen in southern Gujarat’s Dang and Tapi belt as well, besides Maharashtra’s Konkan region. 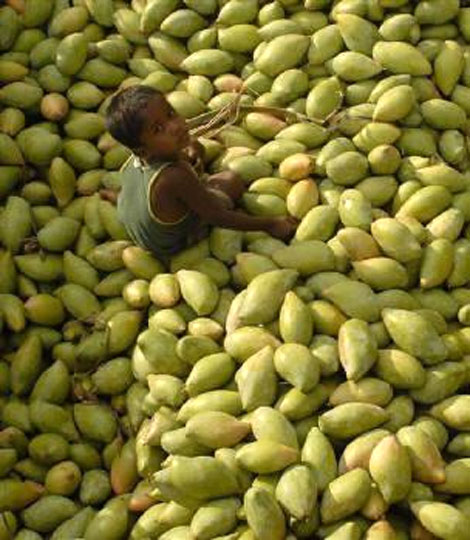 Image: A child sits on a heap of mangos at a fruit wholesale market in Kodur village, about 650 km south of Hyderabad.
Photographs: Krishnendu Halder/Reuters

Continuing bad weather could exacerbate the situation, say local people. Sanjay Vekaria, a farmer from Kodinar in Junagadh, says: “Nearly 50 per cent of the crop has been affected in the Saurashtra area. If this continues, there is fear of disease and pests affecting plants.”

This will also delay arrivals and put pressure on prices, he adds.

Vidyadhar Joshi, who owns a mango farm with over 2,000 trees in Devgad, a place known for its Alphonso mangoes, sees yields falling this season. Production of mangoes in Maharashtra’s Konkan region is expected to drop drastically to 25,000 tonnes from an average 45,000 tonnes last year. Prices have already moved up on account of lower production estimates. 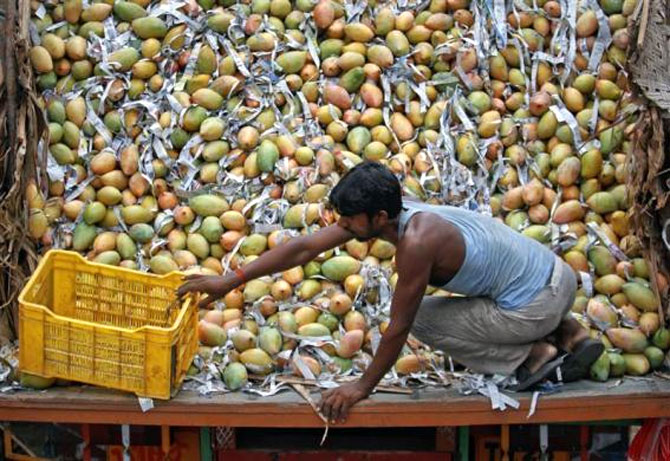 Image: A labourer pulls a basket to fill it with mangoes from a supply truck at a wholesale fruit market on the outskirts of Ahmedabad.
Photographs: Amit Dave/Reuters

“In March 2013, 352 tonnes of mangoes arrived in various markets of the country and the average price was Rs 3,390 a quintal. Today, only 65 tonnes of mangoes have arrived, and the price is around Rs 4,550 a quintal,” said Ajit Gogate, chairman of Devgad Taluka Amba Utpadak Sahakari Sanstha, a society of 700 farmers growing Alphonsos in Devgad taluka of Maharashtra’s Sindhudurg.

Andhra Pradesh, which faced unseasonal rainfall, is also feeling the pinch. According to the first estimates by the state’s horticulture department, the output could be 4.54 million tonnes, marginally higher than that last year.

This, however, might be revised downwards, say sources. The level of damage in some areas is estimated to be 50 per cent. Within the state, coastal Andhra and Rayalaseema regions together account for 70 per cent area of cultivation and production, while the rest comes from Telangana.

“Retail prices for the initial arrivals should be higher, as traders may speculate against the backdrop of unexpected damages in the first week of March,” said state horticulture commissioner M Papi Reddy. Last season, the average retail price of Hyderabad’s most-preferred Banginapalli and Rasalu had varieties stood at Rs 40-50 a kg and Rs 50-60 a kg, respectively.

Meanwhile, exports are expected to be hit on account of poor quality of crop. The Agricultural and Processed Food Products Export Development Authority data show the country exported 55,585 tonnes of fresh mangoes across the world in 2012-13.

These were worth Rs 265 crore (Rs 2.65 billion). However, Abbas, a leading Mango exporter and promoter of Nafees Nursery, says exports could see a decline this year.

He adds rain-soaked mango flowers are rotting and inviting insects. This will further damage the crop. Between April 2013 and December 2013, India exported mangoes to 65 countries.

Ten per cent of India’s total mango exports went to the European Union, while the largest share (54 per cent) was of the United Arab Emirates. Stringent quality checks by the EU have also been affecting exports there.