Sign in  |  Create a Rediffmail account
Rediff.com  » Business » The men who took on Iron Man and Superman

Next
Faisal Kidwai in Mumbai


Jason Kothari, who along with Dinesh Shamdasani, is making Valiant a name to be reckoned with in the comics industry, speaks to Faisal Kidwai.

The friends, who are comic-book fanatics, bought Valiant Comics after it filed for bankruptcy and are steadily re-establishing its clout. Kothari, chief executive officer, Valiant Entertainment, explains how they are not just proving to be competition for the bigger players, but also becoming a major player in Hollywood.

Tell us about your background.

My parents are from Rajkot in Gujarat. They both studied in Baroda at MS University and came to the US for graduate school. Following this, they worked in New York for 10 years before my father was transferred to Hong Kong while working for a multinational company. 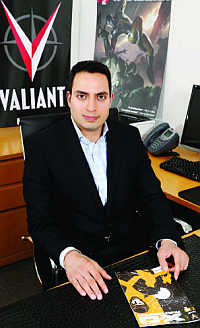 I grew up in Hong Kong before coming to the US to attend Wharton. I held internships at McKinsey & Co, Merrill Lynch, Ogilvy & Mather, among others, and also worked in private equity, but I was most passionate about the idea of building a company, where I could have a more multi-faceted challenge, more control over my destiny and more upside.

At Wharton, I was active in entrepreneurial programmes, including being mentored by successful alumni entrepreneurs that inspired and encouraged me to follow a similar path.

I will never forget the first job I had as a 15-year-old working for Media Asia Films in Hong Kong, now one of the leading film production and distribution companies in Asia. Part of my job was reviewing film distribution contracts, the other assisting actor Jackie Chan on a film set. I was fascinated to see the process behind movie making and storytelling. It created a lasting impression on me, a strong desire to work in the business of storytelling.

Indian Americans are more known for launching information technology companies or going into traditional fields, but you took a completely different route. Why comics?

Growing up in the 1990s, I was a big fan of entertainment, particularly Valiant comic books, like a lot of my con-temporaries. Comic books were a very popular entertainment medium at the time with 50 per cent household penetration. Valiant was originally founded in 1989 by the former editor-in-chief of Marvel after he became the second-highest bidder behind corporate financier Ron Perelman in his attempt to purchase Marvel.

Instead, he founded Valiant and created an original universe of characters that were considered the next evolution of superheroes, as they were more realistic and relatable than other superheroes, and focused on high-quality story-telling.

Valiant was growing so fast in the 1990s that it was widely predicted to become the next Marvel. In 1994, the Nasqaq-listed video game company. Acclaim Entertainment purchased Valiant for $65 million and created successful video games based on the characters, but mismanaged the publishing side of the business.

Acclaim as a whole was highly leveraged and not per-forming well after losing key sports video game licenses, resulting in it filing for chapter 7 bankruptcy in 2005. At the Wharton business school at the time, I was a big fan of the Marvel Entertainment business turnaround up to that point and the unique business model they implemented.

Marvel came out of bankruptcy in 1999 and was sold to Walt Disney Co in 2009 for $4.5 billion, becoming one of the most historic turnarounds in entertainment history. I partnered with my childhood friend Dinesh Shamdasani, a highly talented creative expert, very knowledgeable about Valiant's characters, and together we acquired all rights to Valiant's library of 1,500 characters from Acclaim's estate.

We thought combining Valiant's characters with Marvel's unique business model would be explosive and would give us the opportunity to build an exciting multi-media entertainment company in the vein of Marvel.

How did Valiant Entertainment come about?

We turned down these offers because our goal was to a build a major multi-media company, and instead we raised two rounds of financing from high value-add strategic investors, the former CEO and vice-chairman of Marvel, Peter Cuneo, who was a leader in the Marvel turnaround and is Valiant's Chairman, and early investors in Legendary Pictures, responsible for The Dark Knight V trilogy.

We are proud of the talented team we have assembled. Our management team, includes a former editor at Marvel Warren Simons, whose work was nominated for 21 major industry awards, and Fred Pierce, the former president and COO of Wizard Entertainment.

Bruce was responsible for some of the most successful video games in history like the Fifa, Medal of Honor and Sims franchises, and Barbara was responsible for developing some of the most successful television shows, such as 24, Mad Men and House. We relaunched Valiant's publishing business this past May - our characters are, once again, the best-selling characters in the marketplace after only Marvel and DC characters. Valiant consistently has some of the best reviews and is, once again, synonymous with great storytelling.

The former head of Marvel's consumer products and promotions, who built this business for them into one of the largest businesses of its kind, has joined us and is building this business for us in-house. We are now in discussions on a wide range of opportunities for our characters beyond film, which has been a focus of ours for some time, including video games, television, toys, apparel, and animation, among many others.

Any plans to enter the digital market and movie industry?

We are quite active in the movie industry. The Valiant business model, based on the Marvel business model, utilises PG or PG-13 rated major motion pictures of $100 million production budgets or higher as a key driver of taking our characters from being popular characters in the comic book and fanboy communities to becoming mainstays in pop culture.

Valiant's top 10 characters have each sold more comic books than 2/3s or 67 per cent of comic book characters made into movies, and our top characters were outselling characters like Iron Man, Thor and Captain America at their peak, so clearly there is potential for multiple Valiant film franchises.

At the moment, we have five major motion pictures in active development based on our most popular characters with leading partners in the film industry, including Neal Moritz, producer of the Fast and Furious franchise; Sean Daniel, producer of The Mummy franchise and former president of production of Universal Studios; and Doug Davison, producer of Oscar-winner The Departed.


Image: Valiant is quite active in the movie industry.
Photographs: Courtesy, Valiant Entertainment

Next year, we are planning to be become a financing partner alongside major studios for our film projects and are working with a leading investment bank to raise large-scale capital of a couple hundred million dollars to achieve this plan, which is similar in its objectives to the creation of Marvel Studios and would also be a transformative event to our company.

Will we see any Indian characters in the comics?

Valiant was originally known for being the next evolution of superheroes with realistic and relatable characters. Valiant also had a very ethnically diverse universe of characters, including key characters that are Asian, Brazilian and of mixed race. We are continuing that Valiant heritage of being forward-looking as the world continues to become more diverse and interconnected and currently have a prominent Indian character from Kolkata called Darshan in one of our best-selling and critically acclaimed titles called Harbinger. As readers continue to see the new Valiant Universe unfold, India and Indian characters will play an even more significant role.

India has a long tradition of homegrown comic characters. Will Valiant comics go to India any time soon?

Valiant comics are available digitally worldwide, including India, in English-language form on the leading digital comics distribution application, comiXology, which is available on all major platforms.


Image: Thor is one of the best-selling characters, says Kothari.

In fact, comiXology is ranked as one of the most popular iPad applications with over 100 million comic book downloads to date. Valiant comics are some of the best-selling and highest reviewed comics on the platform. Regarding Valiant print comics coming to India, we are currently in early discussions with potential print publishing partners based in India and are planning to sign a partner by Q1 of 2013.

We are excited about allowing more people to experience our characters and stories in our home country.


Image: Director of X-Men: First Class is working with the team.