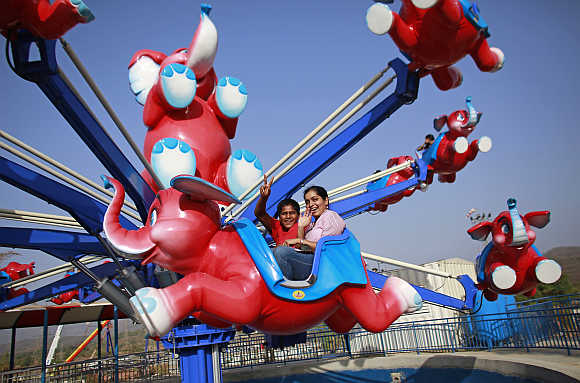 Image: Visitors gesture as they enjoy a ride at the 'Adlabs Imagica' theme park in Khopoli, about 75km from Mumbai.
Photographs: Danish Siddiqui/Reuters Sanjay Jog in Mumbai

India’s own Disneyland is facing a topsy-turvy ride. Media mogul Manmohan Shetty’s biggest bet, Imagica, a theme park set up with a capital of Rs 1,650 crore (Rs 16.5 billion), has come under the Maharashtra government’s scrutiny.

State Revenue Minister Balasaheb Thorat has ordered an inquiry by the Konkan divisional commissioner into allegations of acquisition of land under duress and through encroachment of land owned by tribals and other villagers. The completion of the theme park - owned by Shetty’s Adlabs - located near Khopoli, about 90km from Mumbai, has taken five years. 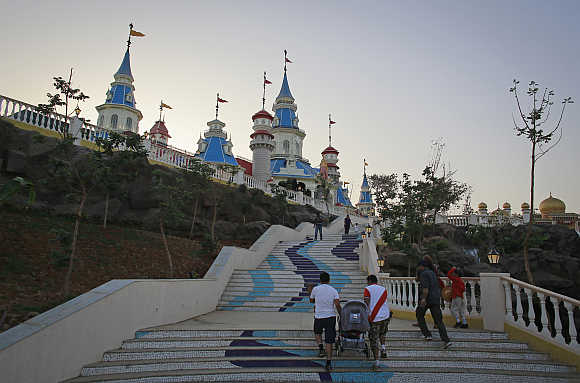 Only 110 acres of the 300 acres acquired for the park will be used for the rides, the water park, a 300-room hotel and other things. The rest has been set aside for further development or expansion. Leader of the Opposition in the state Assembly Eknath Khadse and legislator from Karjat-Khopoli area Suresh Lad said the manner in which the land had been acquired needed to be probed.

Lad raised serious doubts over compliance with the prescribed environment norms and regulations and demanded a thorough inquiry. Thorat said he had gone by the submissions made by the ruling and Opposition members and would have the land purchased by Adlabs measured afresh. 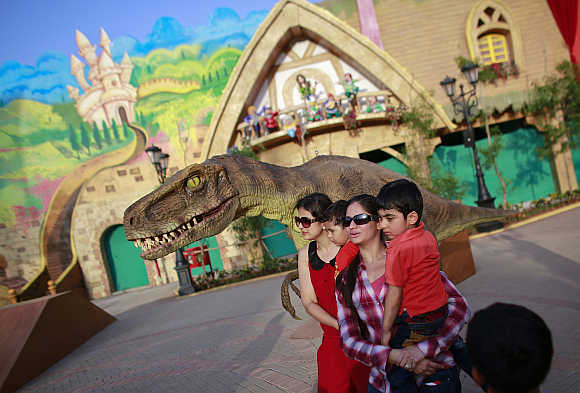 Image: Visitors pose with an employee dressed as a dinosaur.
Photographs: Danish Siddiqui/Reuters

He said tribals would be given back their land if the allegations were proved. He added Adlabs had paid a royalty of Rs 1.14 crore (Rs 11.4 million) for the exploration of 57,000 brass minor minerals and also deposited a penalty of Rs 1.05 crore (Rs 10.5 million) - an amount, Lad said, was not enough.

A revenue ministry official said: “The ministry will soon send a communication to the Konkan divisional commissioner, asking him to investigate the issues raised by the legislators in the state Assembly. He is expected to complete the probe within a month.”

An Adlabs spokesman was unavailable for comment. Shetty, who has modelled Imagica on the lines of Universal Studios, opened the park in April. 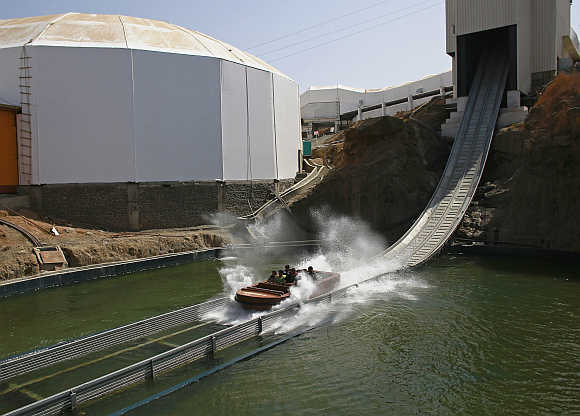 His daughters Aarti and Pooja worked alongside to infuse local flavours in the content of the attractions. Imagica has been divided into different sections - an adrenaline zone with gravity-defying rides for teenagers; a kids’ area that has junior roller coasters; and a calm space by the lake, where adults can catch their breath or refuel with food and drinks.

The tickets cost Rs 1,200 for adults and Rs 900 for children on weekdays. On weekends, the prices increase by Rs 300. A visitor can pay Rs 1,000 extra to join an express line and cut waiting time. The park can accommodate as many as 20,000 visitors.

Shetty had set a target to host three million visitors in the first year of operations.