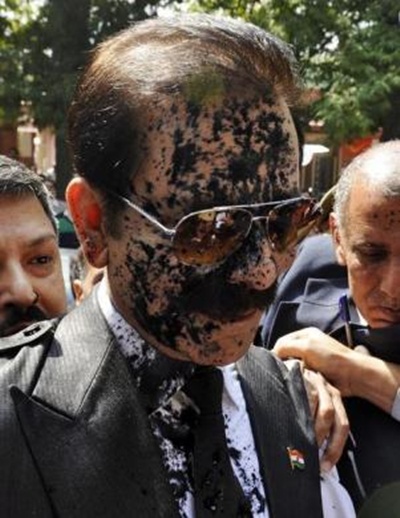 Image: Subrata Roy with his face smeared in ink thrown by an unidentified man arrives at the Supreme Court.
Photographs: Reuters

In a virtual crackdown, the Supreme Court on Tuesday sent Sahara chief Subrata Roy and two of his group directors to Tihar jail for a week for not complying with its order on refunding around Rs 20,000 crore (Rs 200 billion) of investors money, charging them with adopting "dilatory tactics".

On a day of high drama in the apex court premises, where a Gwalior resident threw ink on Roy and blackened his face calling him a "chor", a two-judge bench minced no words to tell him, "You pushed us to the corner. Had you been serious, this position would not have arisen."

In a hard-hitting order, the bench consisting of Justices K S Radhakrishnan and J S Khehar questioned the claims made by the group of having refunded the money.

The claims of the group have cast doubts over the existence of so-called investors, the court observed adding fact-finding authorities like SEBI have found they do not exist.

Making it clear that the order on custody of Roy and two other directors Ravi Shankar Dubey and Ashok Roy Choudhary was not in the contempt case, the court spared another director Vandana Bhargav because of her being a woman. It fixed March 11 as the next date of hearing.

With his face washed clean of the black ink, Roy, who was brought in police custody from Lucknow, appeared before the bench in a jam-packed room and tendered an unqualified apology with folded hands.

He begged for more time to comply with its order for depositing the money with market regulator SEBI by selling properties and by providing bank guarantee.

Wearing his trade mark waist coat and a tie with Sahara logo, 65-year-old Roy made all out efforts to convince the bench that he will abide by all its orders and sought more time to deposit the amount.

But the court was in no mood to show any mercy after the group failed to give any concrete proposal on depositing the money to SEBI. At one stage, the court was livid with Roy when he told the bench "I am giving an assurance I will pay the money to you."

Justice Khehar shot back, "We don't need from anything from you."  Roy immediately apologised saying it was a slip of the tongue. Roy said he had complete in the judicial system and submitted that there was no blot on him in the last 37 years and that he was ready to abide by all the orders.

"I have faith in you.  Punish me if I don't comply with your order," he said.

The bench, however, dismissed the plea of Roy and his advocates saying that the company has adopted various dilatory tactics to delay the implementation of its orders and it is essential to maintain people's faith in judiciary. 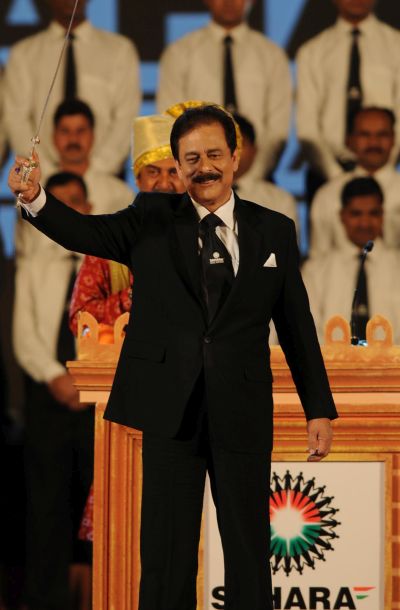 "We notice, on this day also, no proposal is forthcoming to honour the judgement of this Court dated August 31, 2012 and the orders passed by this Court on December 05, 2012 and February 25, 2013 by the three Judge Bench.

"In such circumstances, in exercise of the powers conferred under Articles 129 and 142 of the Constitution of India, we order detention of all the contemnors, except Vandana Bhargava, and send them to judicial custody at Delhi, till the next date of hearing," the bench said.

It said concession was being  extended to Bhargava "because she is a woman Director and also to enable the contemnors to be in a position to propose an acceptable solution for execution of our orders, by coordinating with the detenues."

"Sufficient opportunities have been given to the contemnors to fully comply with those orders and purge the contempt committed by them but, rather than availing of the

same, they have adopted various dilatory tactics to delay the implementation of the orders of this Court.

"Non-compliance of the orders passed by this Court shakes the very foundation of our judicial system and undermines the rule of law, which we are bound to honour and protect. This is essential to maintain faith and confidence of the people of this country in the judiciary," the bench said.

While fixing the date of next hearing on March 11, the bench also granted permission to Roy to seek preponement "if a concrete and acceptable proposal can be offered in the meantime". 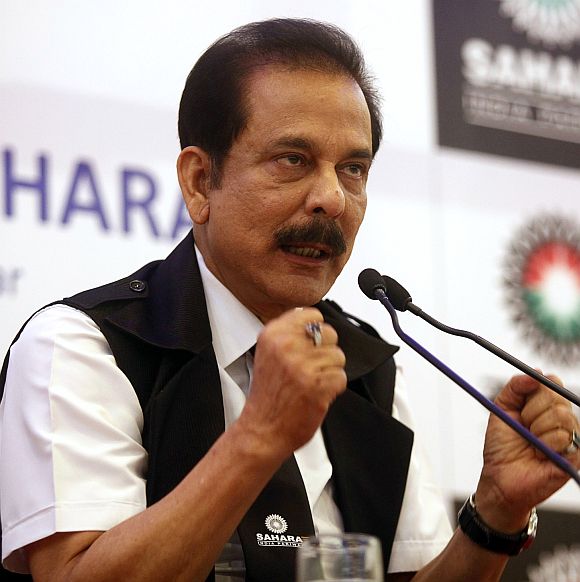 It said that Roy and other Directors filed "false and contradictory" affidavits which apparently falsify their refund theory and cast serious doubts about the existence of the so-called investors.

"We have found that the contemnors have maintained an unreasonable stand throughout the proceedings before SEBI, SAT, High Court and even before this Court. Reports/analysis filed by SEBI on February 18, 2014 make detailed reference to

the submissions, documents, etc. furnished by the contemnors, which indicates that they are filing and making unacceptable statements and affidavits all through and even in the contempt proceedings.

"Documents and affidavits produced by the contemnors themselves would apparently falsify their refund theory and cast serious doubts about the existence of the so-called investors. All the fact-finding authorities have opined that majority of investors do not exist," the court said.

It said preservation of market integrity is extremely important for  economic growth of this country and for national interest.

"Maintaining investors' confidence requires market integrity and control of market abuse. Market abuse is a serious financial crime which undermines the very financial structure of this country and will make imbalance in wealth between haves and have nots." it said.