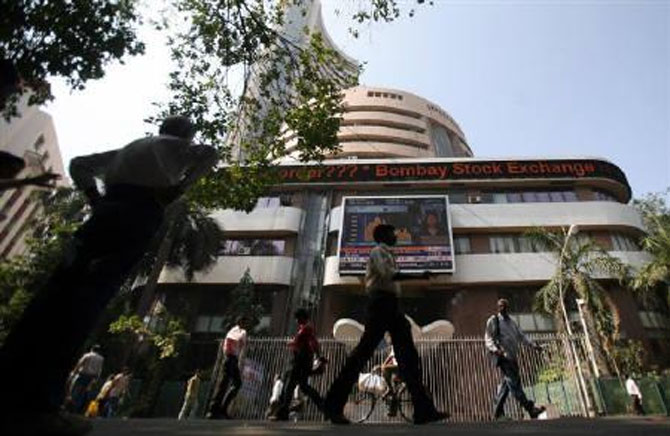 Markets staged a recovery on Friday led by gains in IT majors and index heavyweight like Reliance and Tata Motors after a sharp decline in the previous session. Further, whole sale price inflation in January which eased to an 8-month low also helped improve sentiment.

IT shares led the gains today with Infosys and TCS adding over 1 percent each.

Markets continued to remain range bound in late noon trades on Friday as gains in IT majors helped offset most of the losses in rate sensitive shares.

Technical analysts are of the view that benchmark Nifty finds strong support at 5,980-6150 levels.

"As derivative data suggest that 6000 put is being accumulated. There is open interest of more than 90 lakh put at 6000 level which is higher than 6 months average," says Nitin Murarka, Head-Derivatives, SMC Global.

While, Pritesh Mehta-Technical analyst at IIFL says, "After cracking sharply in the previous weeks, Indices consolidated in a narrow range which eventually resulted in a breakdown.

However, Nifty yet again found support at its 200-DMA to settle with gains on Friday. Despite the pullback, undertone continues to be bearish as the near term resistance is seen at 6,150 levels.

On the downside 5,980 will act as make or break levels for current upswing which started on Friday."

The wholesale price inflation, decelerated faster than expected, to ease to an eight-month low of 5.05 percent in January.

The Wholesale Price Index-based inflation softened from 6.16 percent in December, owing to ease in the food prices, official data released today showed. This is the lowest since May when the inflation rate stood at 4.58 percent.

Also, foreign institutional investors were net buyers of shares worth Rs 399.40 crore on Thursday, as per provisional data from the stock exchanges. US Federal Reserve's announcement to increase the pace of tapering its bond buying program by another $10bn in January sparked off a rout in emerging markets.

India though relatively safe as compared to other emerging markets such as Turkey and Argentina which saw their currencies plunge to record low levels, faced selling pressure in stocks from FIIs.

The trend however saw a reversal as they turned buyers in the last 6 sessions.

On the global front, Japan's Nikkei share average slipped to a one-week low in volatile trade on Friday, giving up earlier gains as sentiment was soured by a stronger yen and as some investors trimmed their exposure ahead of the weekend.

It dropped 1.0% for the week, marking the sixth straight weekly fall.

Weak US retail sales data has raised some investors' expectations for a slower reduction in the US Federal Reserve's monetary policy stimulus programme.

The decline in January WPI also helped improve the sentiment.

Telecom shares such as Bharti Airtel, Idea Cellular and Reliance Comm gained after the spectrum auction ended yesterday. The companies are required to pay 33% of 1800MHz spectrum and 25% of 900MHz spectrum price upfront and rest can be paid in ten installments along with an interest component after two years moratorium period.

The country’s largest state-owned lender had profit of Rs 3,396 crore in the same quarter last fiscal. Among others HDFC, Axis Bank and ICICI Bank were down 0.8-1.3% each.

Pharma shares which had gained in the previous sessions also witnessed profit taking with Sun Pharma and Cipla down 1-2% each.

Other gainers include index heavyweight Reliance Ind and Tata Motors.