Markets consolidate as May 16 jitters keep punters in check 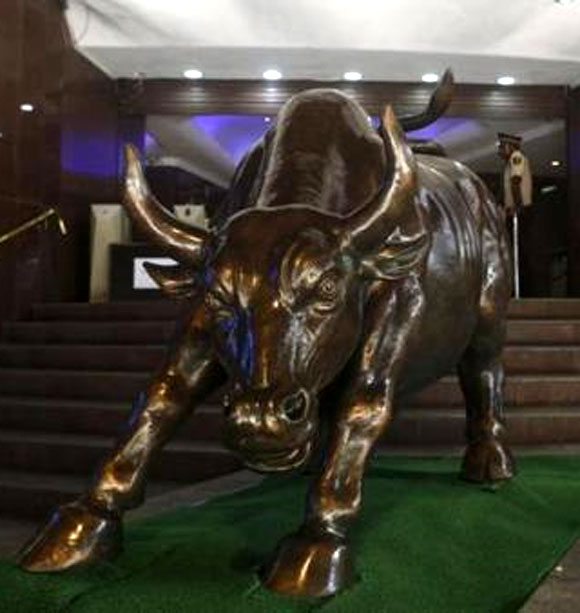 Image: The Bull at the Bombay Stock Exchange.
Manu Kaushik in Mumbai

It was lackluster session that saw market consolidate further ahead of election results slated to be announced next week.

Both Sensex and Nifty trimmed initial gains towards the end in rangebound trades but ended with gains led by heavyweight financial, oil & gas stocks among others.

Market participants are wary of wild swings expected in stocks on May 16 -- the poll results day, and therefore refraining from taking leveraged bets now, say analysts.

Volatility is also expected to set in post exit poll results on May 12-the last day of polling.

“CNX NIFTY has been consolidating in a range of 6650 to 6870 levels for last six weeks, it is finding sustains buying interest at lower band of the trading range but fails to hold higher levels in the absence of follow up buying and lack of participation ahead of Election result 2014.

Nifty spot is hovering near to 6700 zone but no major put unwinding seen at 6700 strike which indicates that 6650 is likely to hold time being.

On upside if it sustains above 6740 then an up move may be seen towards 6800-6825 levels,” said Chandan Taparia -Derivative Analyst at Anand Rathi Financial Services.

Services, the biggest chunk of India's economy, contracted for the tenth month in a row in April, even as the rate of fall decelerated, showed widely-tracked HSBC purchasing managers' index.

The index, however, remained below 50 points, which shows decline in activities. PMI over 50 points denotes expansion. This somewhat weighed on the sentiment capping upside in mid-morning deals.

The market sentiment was however boosted by data showing that foreign funds remained net buyers of Indian shares on Monday.

Foreign institutional investors bought shares worth a net Rs 280 crore on Monday, as per provisional data from the stock exchanges.

Among BSE indices that track stocks of different industrial sectors, BSE Consumer durables surged over 3% followed by oil & gas index which added 1% and BSE Bankex- that track banking stocks- was up 0.5%.

The broader markets outperformed the BSE benchmark index, with the mid and smallcap indices gaining 0.3-0.5%.

The market breadth was marginally negative on BSE. 1,383 stocks declined while 1,361 stocks advanced.

Ricoh India rallied 12.5% to Rs 145 after the company's promoter announced delisting offer to the public shareholders of the company.

Alkyl Amines Chemicals has moved higher by 4% to Rs 323 after the company said its board will consider the sub-division of equity shares of face value of Rs 10 a share to a lower denomination.

City Union Bank gained 6% to Rs 61.65 after the Reserve Bank of India allowed foreign institutional investors to purchase up to 35% of the paid-up capital of the bank.

Atul Limited surged 12.5% to Rs 735, extending its previous day’s 19% rally, after reporting an over two-fold jump in standalone net profit at Rs 51.56 crore for the quarter ended March 31, 2014, on back of higher sales. Lalbhai Group agrochemicals firm had profit of Rs 21.44 crore in the same quarter year ago.

United Bank of India gained 5% to Rs 36.45 after reporting an over ten-fold jump in net profit at Rs 469 crore for the quarter ended March 31, 2014 (Q4), on the back of cash recovery and lower provisioning towards bad loans.

The state-owned bank had reported a profit of Rs 31 crore in the same quarter last year.